The Viscounts Kenmare are included here as background, because they were patrons of the Gaelic poet Aodhagán Ó Rathaille. 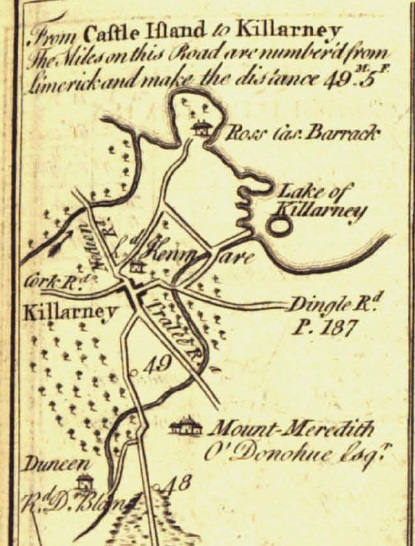 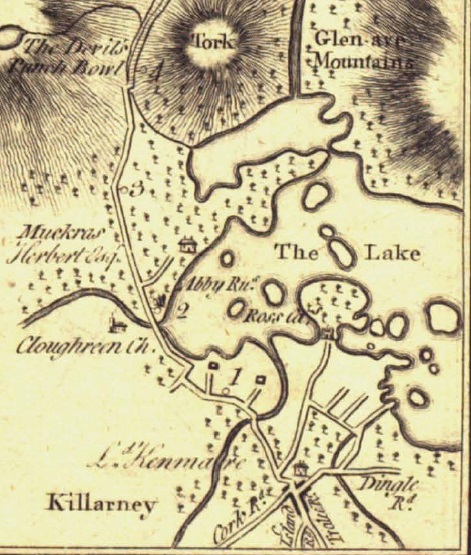 The Brownes came originally from Totteridge, Hertfordshire, and Croft, Lincolnshire, and Hoxton, Middlesex.
They came to Ireland in 1555 [Smith, 1756].
They were a Catholic family, of in and around Killarney, Co.Kerry, who eventually succeeded to the estates of MacCarthy Mor.
The main branch in fact ended up descended from the MacCarthys.

Valentine Browne, 1st Viscount Kenmare, born 1638.
He was for most of his life Sir Valentine Browne, 3rd Baronet. He succ as Baronet as a child in 1640.
His seat was at Ross Castle, SW of Killarney, on the lake (see map).
He added a new house (a wing) at Ross Castle in 1688.
He was a Jacobite supporter.
He was cr 1st Viscount Kenmare by exiled James II 1689.
The name comes from Kenmare Castle, Hospital, Co.Limerick. NOT from Kenmare, Co.Kerry.
He was attainted after final defeat of James 1691, estates forfeit 1691.
He died 1694, age 56 yrs.
He had issue:


Nicholas Browne, 2nd Viscount Kenmare,
born est c.1670.
He was also a Jacobite supporter. His estates were forfeit. He was exiled from Killarney.
He succ his father 1694, but was in exile.
It seems that when exiled from Killarney (in 1691 to 1720 period) the Brownes (or some of them) lived at Molahiffe, between Killarney and Tralee, Co.Kerry (see map).
He was patron of the Gaelic poet Aodhagán Ó Rathaille.
Rathaille bemoaned the exile of the Catholic Brownes from their Killarney estates, where he lived.
In his elegy to the 2nd Viscount's uncle John Browne (1706), Rathaille says: "Alas! the land is wearied at thy loss! Its people without a lord ... Sliabh Luachra is in trouble because of thy fall".
2nd Viscount died in exile in Belgium, Apr 1720, age est c.50 yrs.
Page 55 of [Dineen and O'Donoghue, 1911] says died in Brussels.
Some other source said died in Ghent.
He had issue:

The Gaelic poet Aodhagán Ó Rathaille had a mixed relationship with his patrons the Viscounts Kenmare.
Ó Rathaille can't decide whether he loves them or hates them.

In his elegy to John Browne (1706), Ó Rathaille pays tribute to the Browne family.
He describes them as "the noble pulse of Brown".
He celebrates their MacCarthy ancestry.
"A Pearl from the Lee" here is John Browne's mother Mary MacCarthy, of the MacCarthy seat, Blarney Castle, a bit N of the River Lee.
From page 59 of [Dineen and O'Donoghue, 1911].

The previous, and other works in praise of the Brownes, entirely conflict with this later angry poem about the 3rd Viscount by Ó Rathaille, where he describes him now as an usurper of the rightful lord, Donough MacCarthy, 4th Earl of Clancarty, who is in exile in Hamburg.
"Since Sir Valentine usurped the rights of the noble MacCarthy."
No mention of Browne's MacCarthy ancestry here. In fact, Browne is Clancarty's cousin.
From page 33 of [Dineen and O'Donoghue, 1911]. 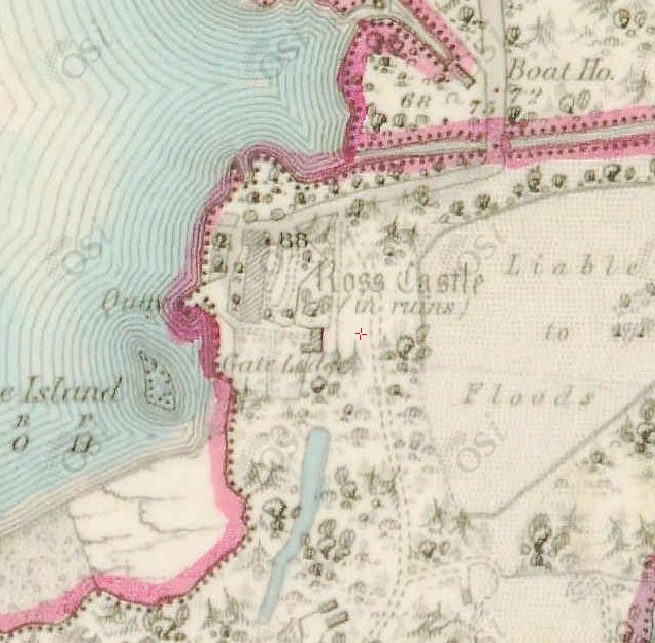 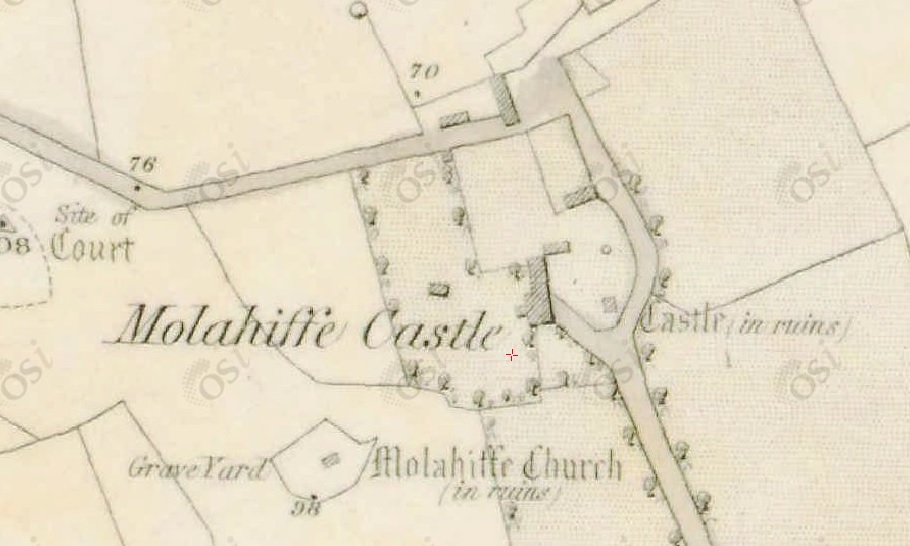 Molahiffe on 1829 to 1842 map.
The Brownes in exile from Killarney in 1691 to 1720 period are believed to have lived here, at the house built beside the old ruined castle. 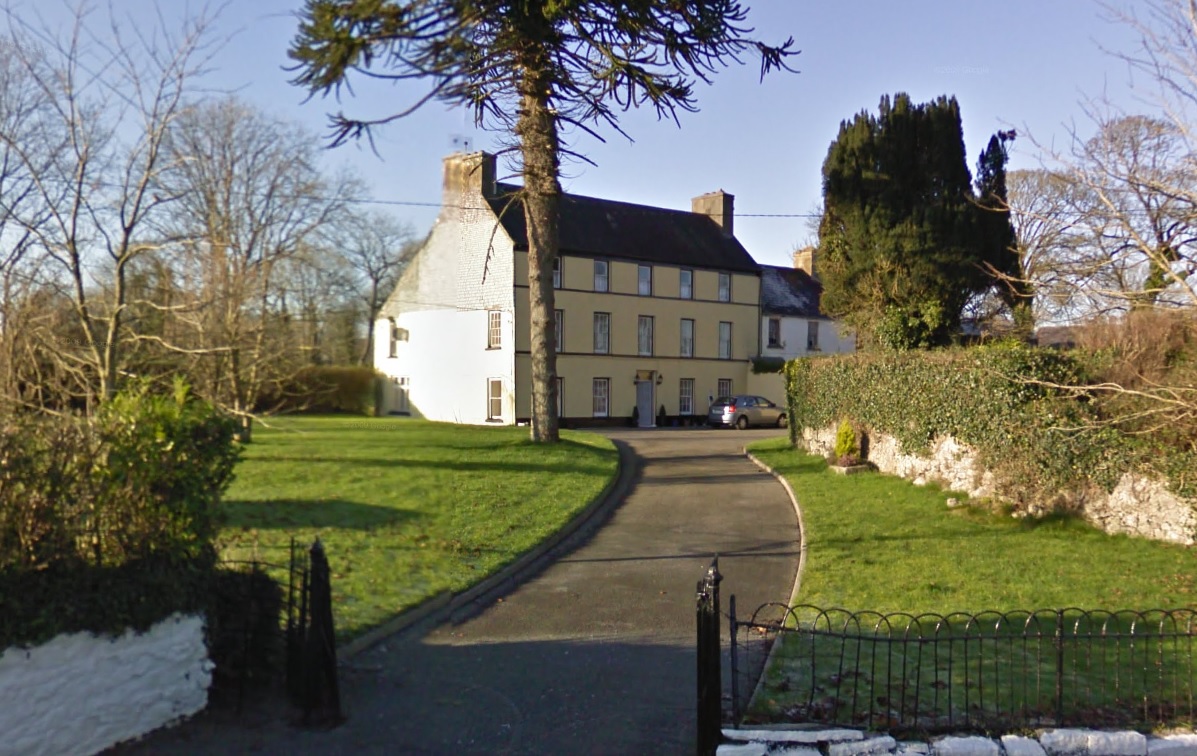 The beautiful old house at Molahiffe today.
From street view.