I call it as proved that my ancestor George Cashel (born 1807) descends from Robert Blennerhassett (died 1765) and his wife Frances Yielding. Nothing else explains the DNA.

The exact link to the Baronets family is unknown. It remains to prove this from paper, to confirm from paper records what the DNA says must exist.

George Cashel's RIC record.
Showing that he was recommended by "A. Blennerhasset, J.P." when he joined the County Constabulary in 1828. 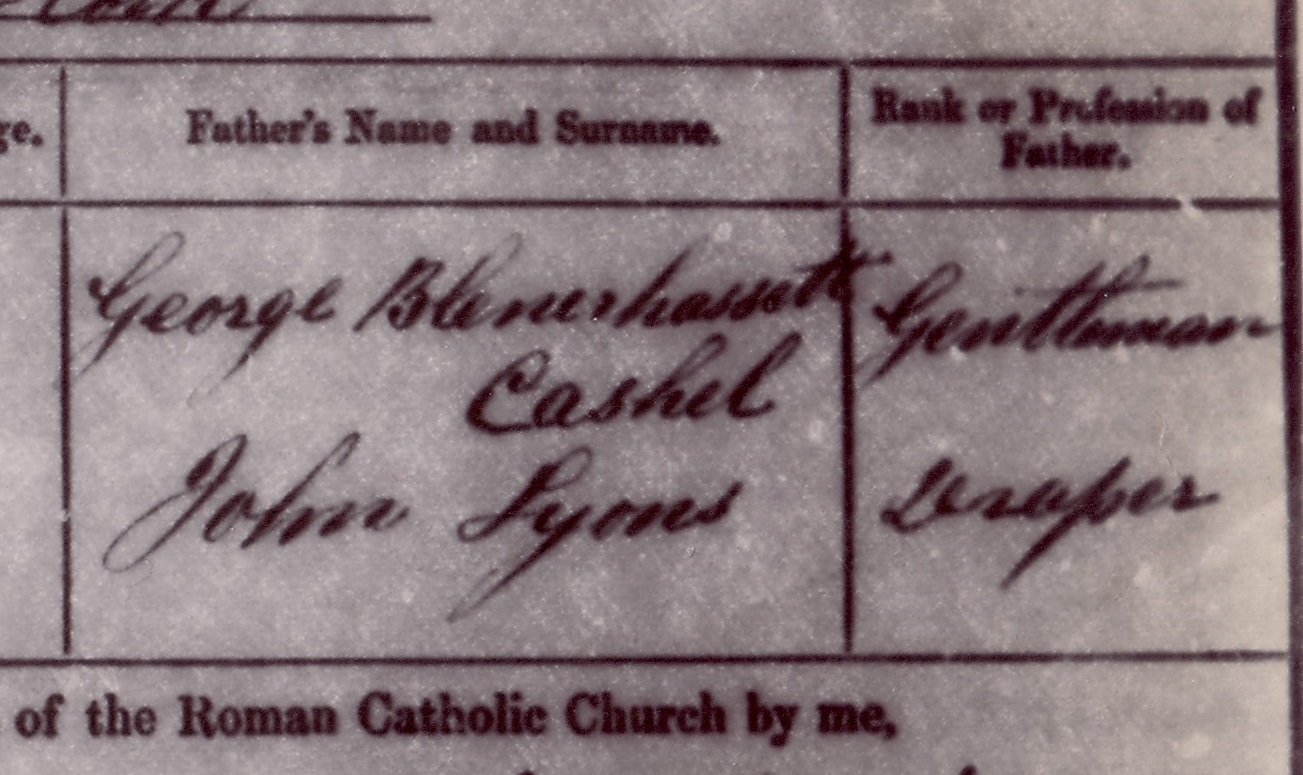 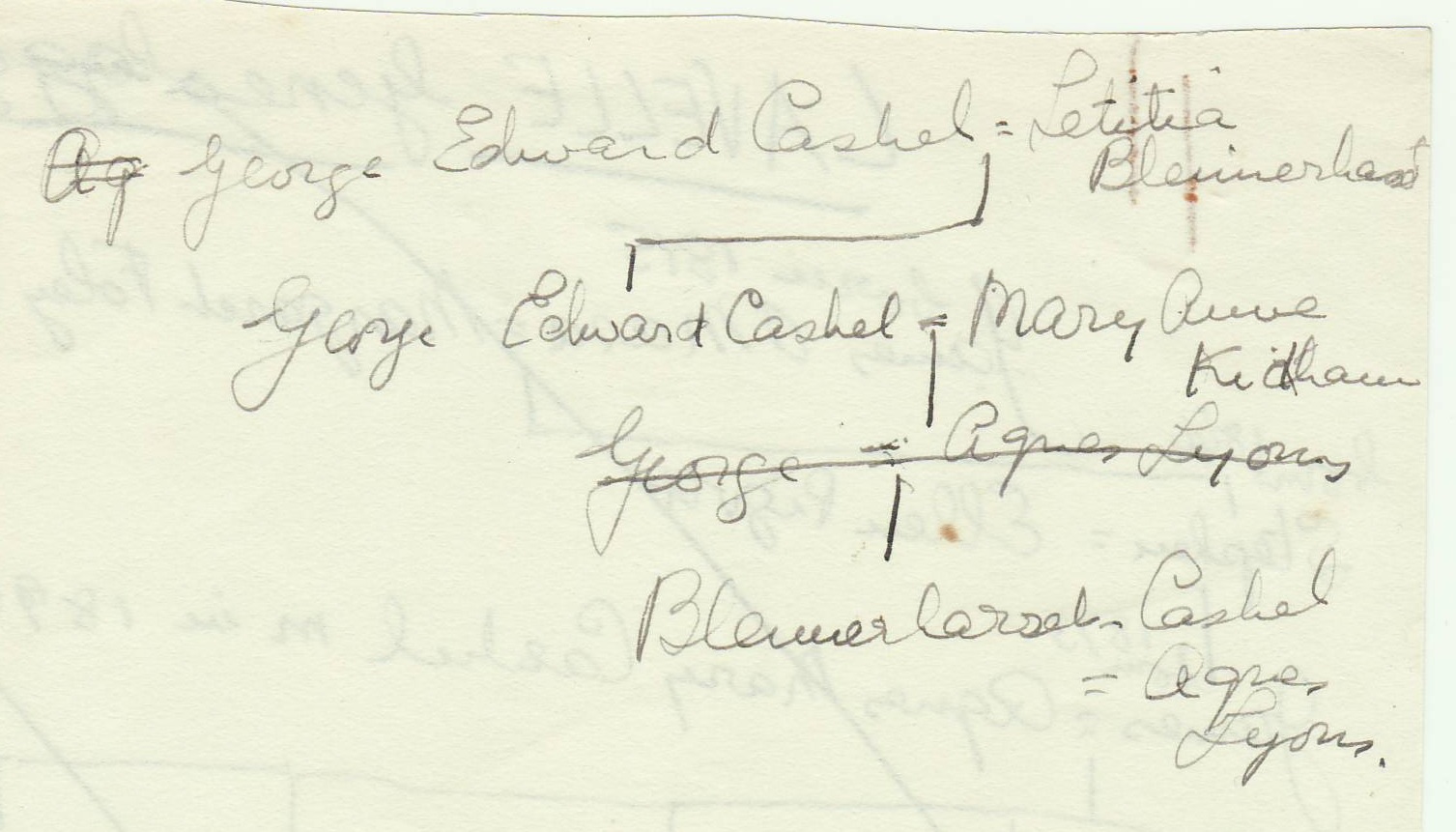 This brief note in the BLENNERHASSETT entry in [Burkes Irish, 1976] by Brian Fitzelle first made me realise in 1985 that my Blennerhassett line might connect to the World family tree. 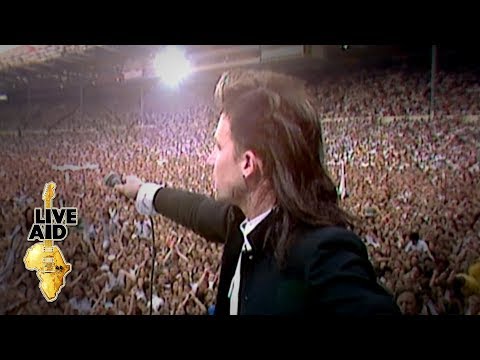 U2 at Live Aid in 1985 - the summer when my lifelong quest for Blennerhassett began. 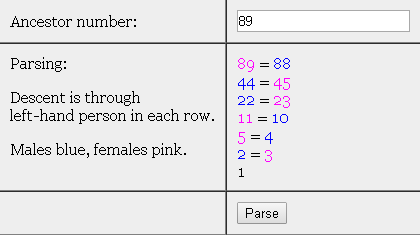 The parents of George Cashel are not that far back.
They are Ahnentafel number 88 and 89 (if I am number 1).
There are 64 people in that generation, numbered 64 to 127. 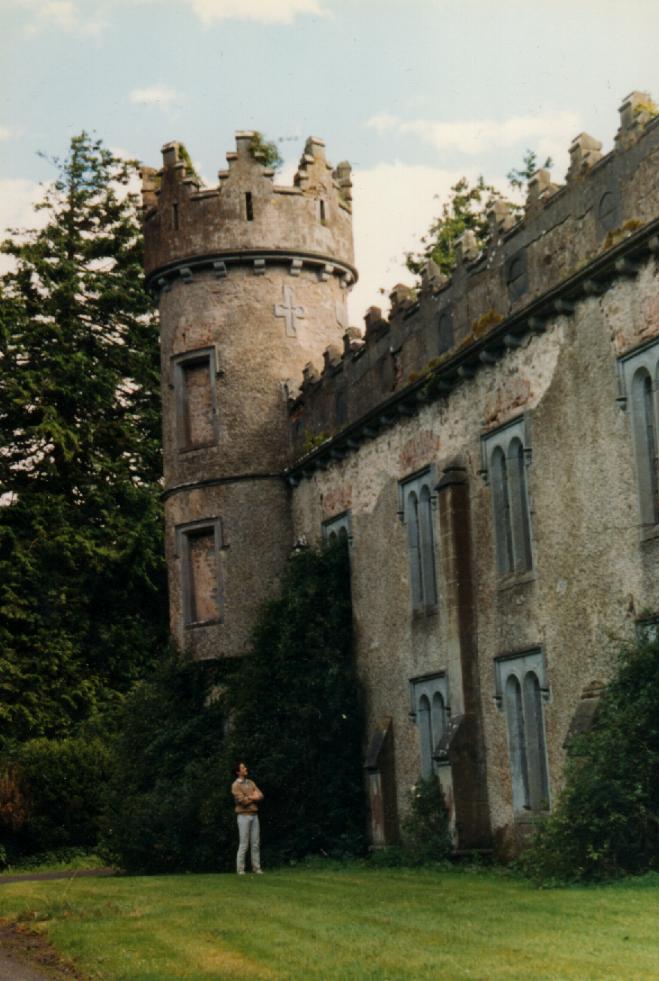 Me at New Ballyseedy in 1985, at the start of the life-long hunt for Blennerhassett.
It later turned out that my ancestors never lived in this building. 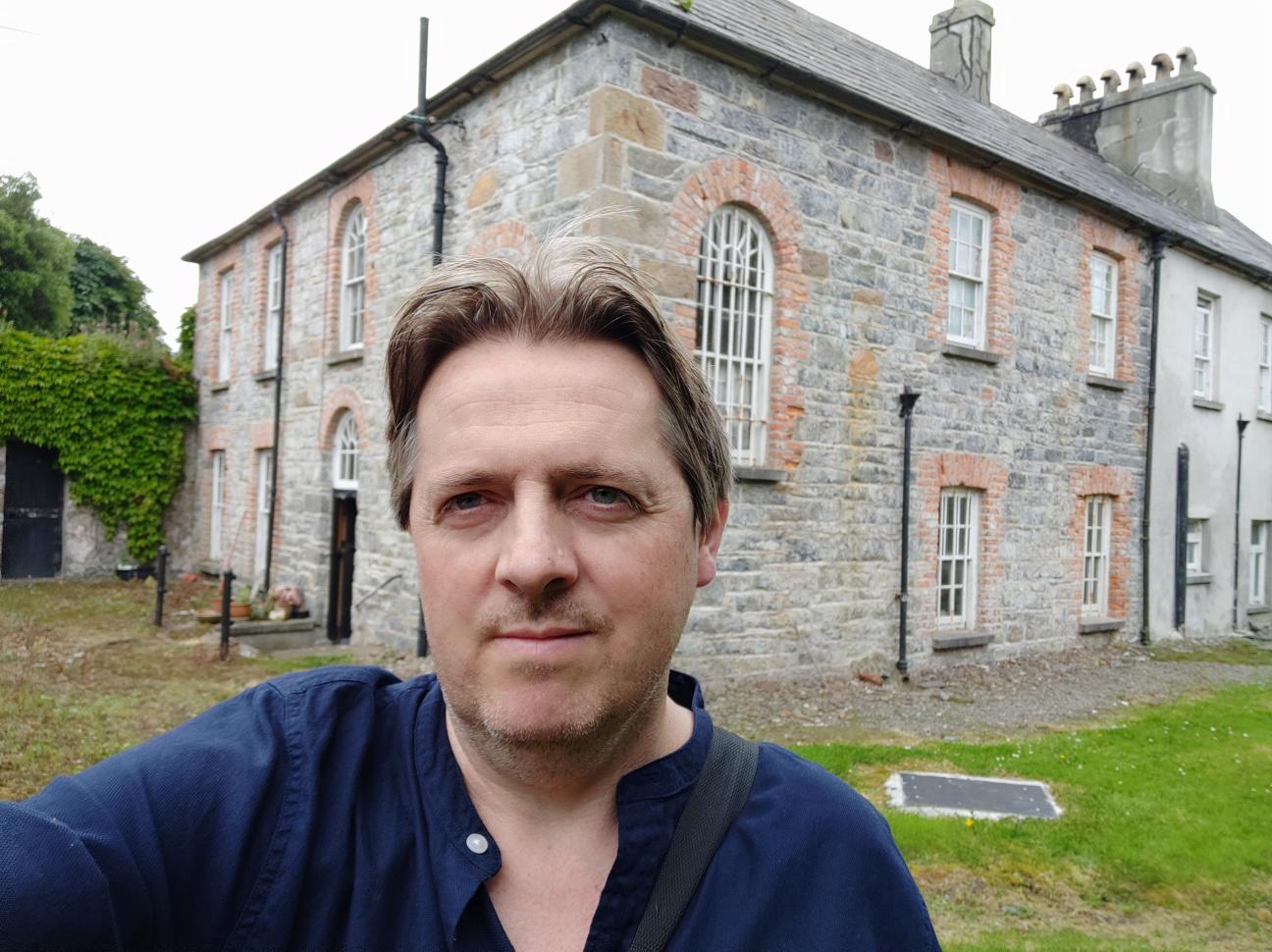 Me at the rear of Blennerville House in 2022.
This is probably my actual ancestral home.

Due to my friendship with the cartoonist and artist John Chambers, a mythical version of our supposed ancestor "Letitia Blennerhassett" has entered popular culture. John has followed the Letitia Blennerhassett story since the 1980s, and, loving her name, has included her in various of his creations. 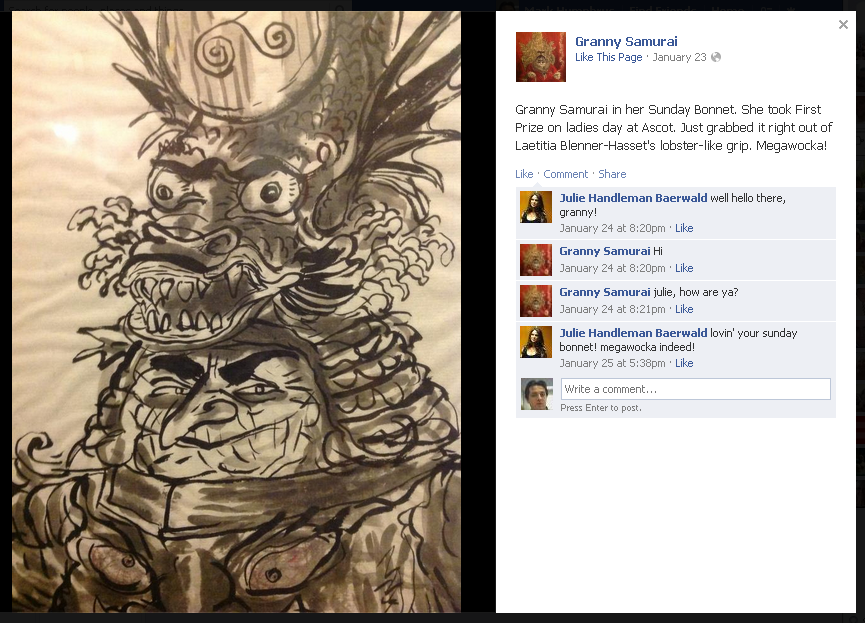 Post, 23 Jan 2013, by Granny Samurai on Facebook.
"Granny Samurai in her Sunday Bonnet. She took First Prize on ladies day at Ascot. Just grabbed it right out of Laetitia Blenner-Hasset's lobster-like grip. Megawocka!" 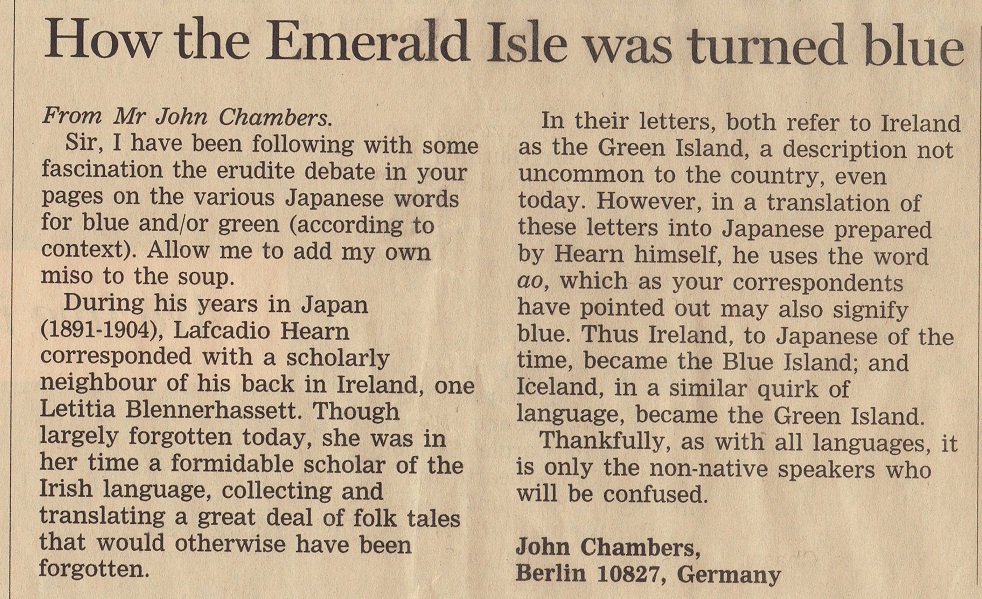 John writes a joke letter to the Financial Times in 2008.
"How the Emerald Isle was turned blue" (and here), Financial Times, 22/23 Mar 2008.
"During his years in Japan (1891-1904), Lafcadio Hearn corresponded with a scholarly neighbour of his back in Ireland, one Letitia Blennerhassett. Though largely forgotten today, she was in her time a formidable scholar of the Irish language, collecting and translating a great deal of folk tales that would otherwise have been forgotten."
This letter was published, but the data is entirely made up.

My link to medieval Ireland

My link to medieval Ireland and England was burnt in 1922, and rediscovered by me in 2020. 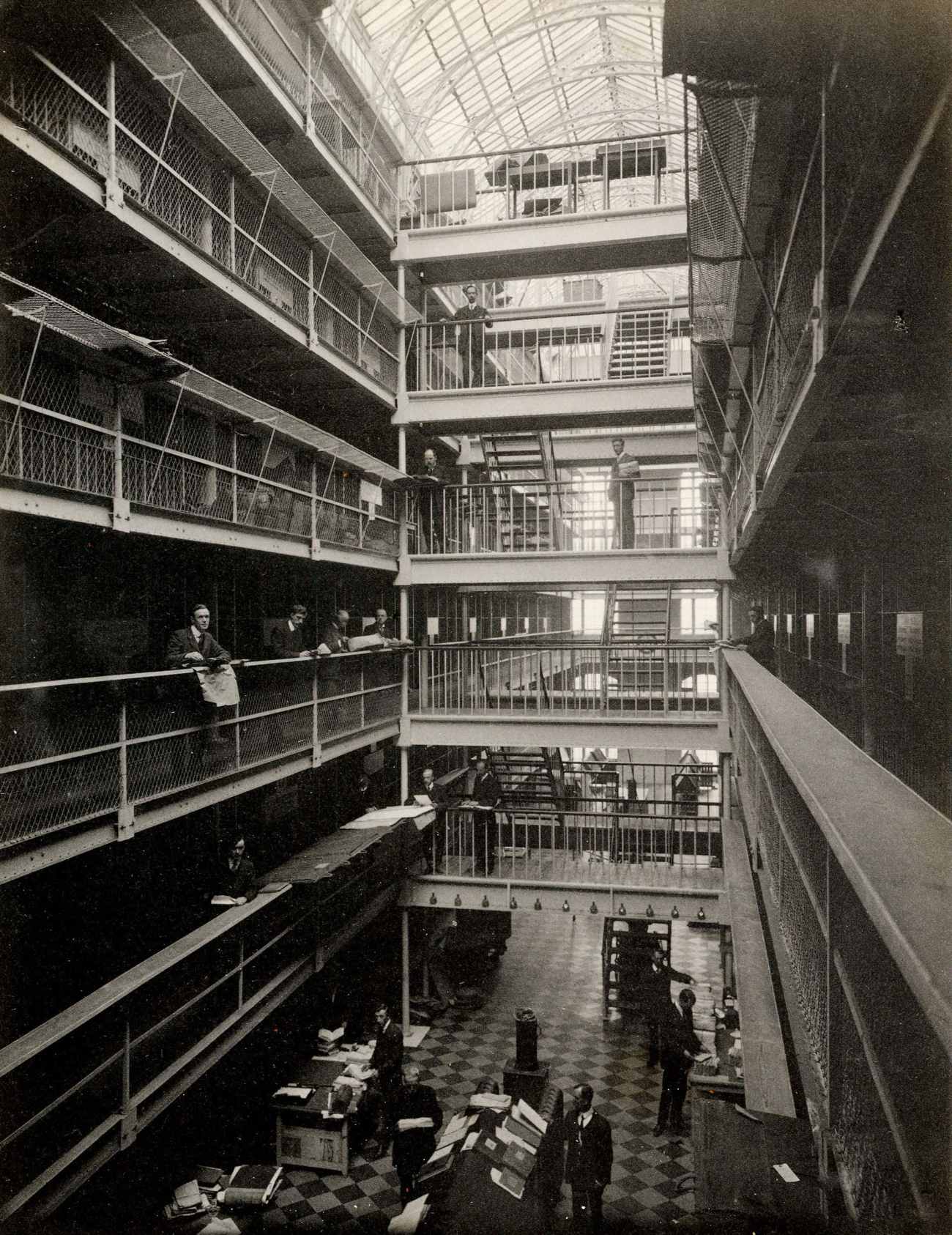 The Public Record Office, Dublin, before it was burnt by Irish "patriots" in 1922.
The 1821 census would probably have solved the Blennerhassett problem immediately, by explaining who 14 year old George Cashel's parents were.
But it was burnt in 1922. My link to medieval Ireland was broken for most of my life, because of Irish "patriots".
They burnt the 1821 census, 1831 census, 1841 census and 1851 census.
See larger and full size.
From here.