Things to do for Letitia Blennerhassett - LDS reference

LDS reference to Letitia Blennerhassett in 1806

An entry in the [LDS IGI] has a tantalising reference to Letitia Blennerhassett, wife of Richard Ponsonby of Crotto.
The LDS entry says Letitia married Richard Ponsonby in 1806 at "Crotto Listowel, Kerry, Ireland".
This is not true (they married in 1799) but did something happen in 1806 at Crotto?
I had a theory that yes - they separated in about 1806.
So I would like to find the source for this LDS entry.

Email from the LDS says: "I have had it confirmed that (submitter "unknown38379") refers to data that was entered from a compiled list of entries that had no sources."

This was later merged in 2016 into a familysearch.org Family Tree by Meg Cross here: Click on "Open Details" to see who added info (and possibly contact them).
Gives: "jastephens719849" and "unknown4470317".

Note (and here) says "unknown4470317" is not a real ID: "The unknown ID, 4470317, identifies a generic contributor applied to thousands of temple records during a time when the name of the contributor was not preserved."

The source of the above is the Official temple record, a section compiled in New Zealand, 1992, which I ordered. Here it is: 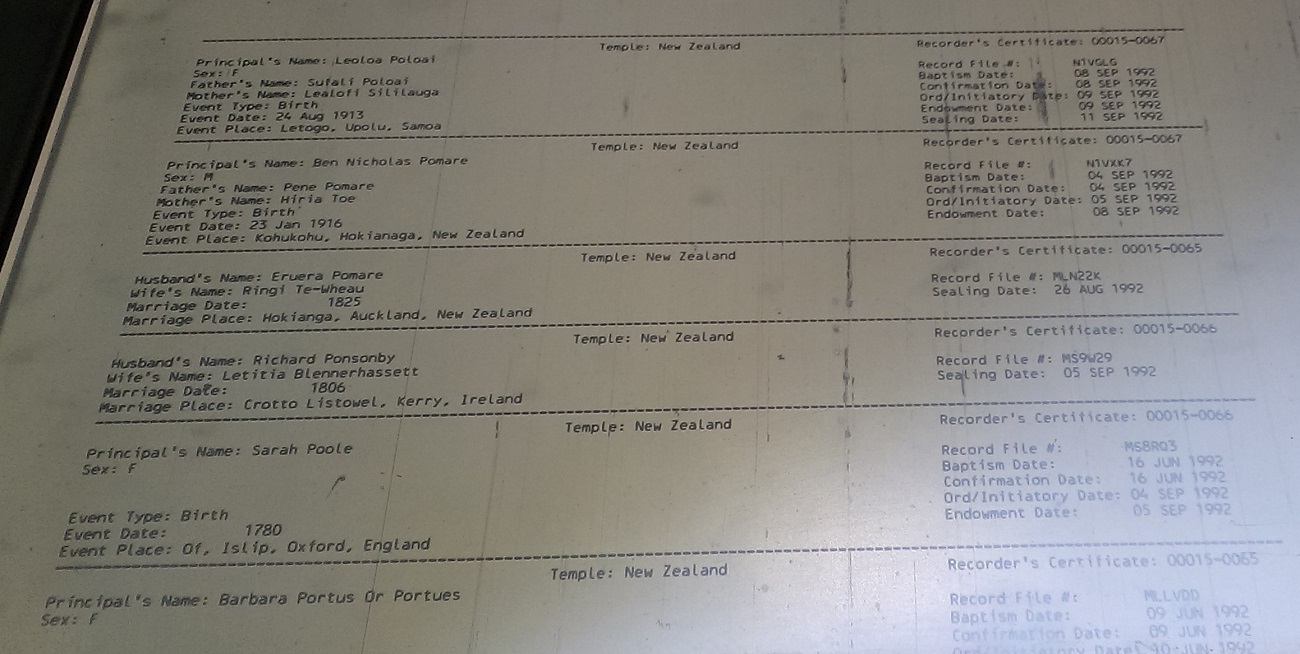 I tried to order the Recorder's Certificate.
However the LDS replied: "After careful research it has been determined that the information you requested was, in fact, submitted by the Patron to the recorder who in turned recorded this information. There are no recorder certificates. None of the records on this film are available. There is no source other than what you already have."

Even if no Recorder's Certificate survives, someone in the LDS may recall what the source was.

The source may still exist

The source existed in New Zealand in 1992.

Even if the LDS people in 1992 have since died, the source may still exist.

The source is probably not the memorial of the 1806 deed

Could the source be the memorial of the 1806 deed?
It seems unlikely, since the LDS includes the location "Crotto", which is not mentioned in the 1806 memorial.

The source is probably just a mis-reading of Burke's

The source is probably just a mis-reading of Burke's Irish Family Records, 1976, incorrectly inserting the date of Letitia's sister's marriage.

Letitia in [Burkes Irish, 1976].
Note her sister's 1806 marriage is right next door. It seems that a mis-reading attached the date 1806 to Letitia rather than her sister.
And Burke's mentions: "Crotto, nr Listowel, co Kerry", which got changed to: "Crotto Listowel, Kerry, Ireland".