Dicey of Basingstoke and Northampton


Thomas Dicey.
He was a tailor, of Basingstoke, Hampshire,

[Simmons, 2000] says that Thomas Dicey was apparently involved in selling patent medicines.
From the 1670s he seems to have been involved in selling one of the earliest British patent medicines, "Daffy's Elixir" (or "Daffey's Elixir", said to be invented by Thomas Daffy in 1647).
Daffy's Elixir was advertised as a cure-all. In reality it was a laxative made mostly from alcohol.

He was said to have married Elizabeth Cluer [bapt 6 Dec 1671].
But this seems wrong. See discussion on that page of problems with this.
He definitely married to Margaret ---- [according to his will].
It may be that his wife should be Margaret Cluer and she was born before 1671.
Or maybe there is no Cluer ancestry. They are just in-laws. See his daughter's husband John Cluer.

Thomas' will is dated 17 Oct 1703. He is Thomas Dicey, tailor, of Basingstoke, in County of Southampton. His wife Margaret is alive.
Note this is definitely him: It shows his daughter as wife of John Cluer. Also when William becomes an apprentice, his father is Thomas Dicey, tailor, of Basingstoke, deceased. Also it fits the date of burial in [Burkes LG].
Thomas was bur at Basingstoke, 31 Oct 1705.
Will proved 22 January 1706 at Prerogative Court of Canterbury.
Thomas had issue:

Marriage of Elizabeth Dicey and Thomas Cobb, 31 May 1729. 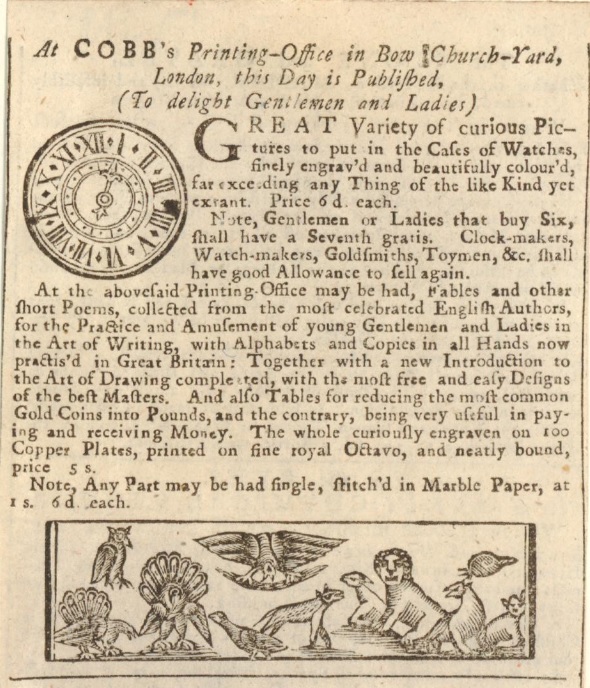 Trade card from the period in between John Cluer and William Dicey when the Bow Church Yard business was called "Cobb's Printing Office".
This must be 1729-1736.
From British Museum.