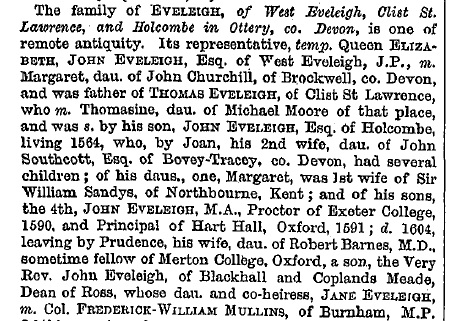 John Eveleigh, MP,
born c.1511,
of Holcombe, Ottery St Mary, Devon.
Think this is the area of Holcombe lane and farm near Ottery St Mary (see map).
Think it would not be Holcombe village a bit further away in Devon (see map).
MP for Totnes 1554.
MP for Tavistock 1554.
He mar 2ndly to Joan Southcott [dau of John Southcott, of Bovey Tracey, Devon].
He died 1586, age c.75 yrs.
He had issue by 2nd wife: