After Margaret's death her sister Mary Robbie (born 1840) helped Peter run the house and raise the children. She stayed with him as housekeeper for 47 years (1868-1915).
Census of 1881 has him at Upperhaugh (Upper Haugh, N side of Alford, see map).
Census lists him as "carpenter".
Grave lists him as "carpenter, Alford village".
He made an oak carved jewel box dated 1881.
He later became a land-steward.
Lived "Murrayfield", Montgarrie Road, Alford (see map).
His "faithful friend and housekeeper" Mary Robbie died "Murrayfield", Alford, 21 Apr 1915, age 75 yrs.
He erected her gravestone at Alford, next to his wife. 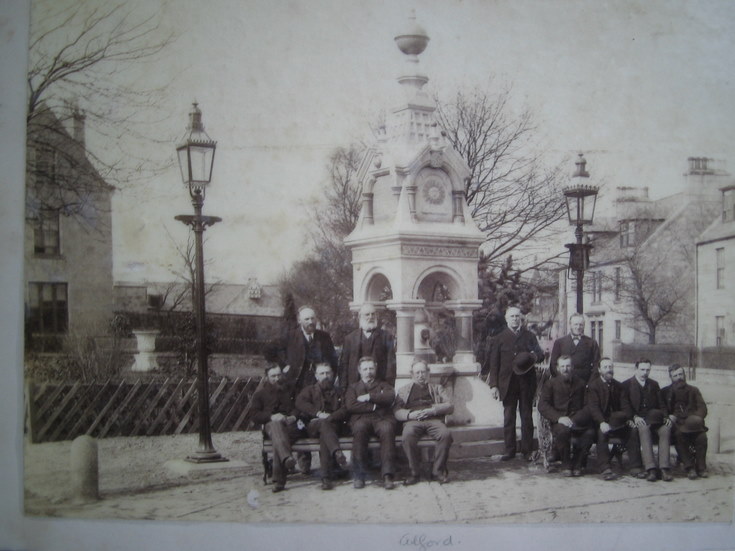 Civic Dignitaries at the Alford Fountain (The Farquharson Fountain) when it was erected in 1891.
Seated on extreme RHS is Peter Murray.
From Alford Heritage Centre and Museum, which has complete list of people.
See modern street view.

Oak carved jewel box, made by Peter Murray.
The side view has date 1881.
The label says it won a prize "at the Glasgow Exhibition in 1881".
This may be an error for the great International Exhibition in Glasgow in 1888.

Oak carved jewel box, made by Peter Murray, dated 1881.
For sale on eBay from this user as at 2009.
See side view and label.