The Republican Loan film.
Length: 7 minutes. Jim Sullivan (see his films) and John MacDonagh made this appeal film for the 1919 Republican Loan for the new self-declared Irish Republic.
Jim Sullivan's brother-in-law, James O'Mara, was one of the three trustees of the funds of the underground Irish government, and one of its main fund-raisers.
Sullivan and MacDonagh made this short film while making "Willy Reilly and his Colleen Bawn".
This film was directed by John MacDonagh.
[MacDonagh, 1976] said that: "In those dangerous and exciting times, no cinema owner would dare risk exhibiting the Republican Loans film so it was planned for a few volunteers in fast cars to visit certain cinemas, rush the operator's box, and, at gun-point, force the operator to take off the film he was showing, and put on the Loan film."

The Republican Loan film was shot at St Enda's.
Michael Collins, the Dail's Minister for Finance, sits at a desk at St. Enda's.
His desk is the block on which Robert Emmet was executed in 1803. (This block is now in Kilmainham Gaol Museum.)
He reads a letter from Michael Fogarty, Bishop of Killaloe, providing a loan to the Republic.
Appearing in the film to loan money to the Republic are, in order:

Then there is a final shot of Arthur Griffith. 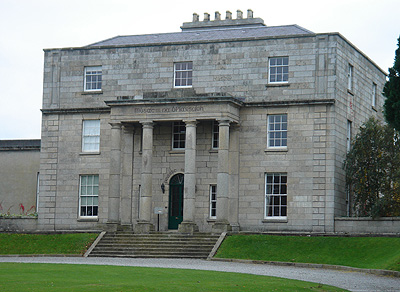