Sinn Fein councillor, 1916 rebel:
W.T. attended first Sinn Fein convention 1905.
Sinn Fein councillor on Dublin Corporation from 1909 through most of the period to 1922. Councillor for Usher's Quay ward (along with Michael Flanagan, whose daughter he would marry).
See him at home in 1911 census (return in Irish, he is "Liam T. Ua Cosgair").
He joined Irish Volunteers 1913.
Fought in 1916 Rising under Eamonn Ceannt at the South Dublin Union. His step-brother was killed.
Afterwards he was sentenced to death. Commuted to penal servitude for life. Interned in Frongoch, Wales.
Released under general amnesty Jan 1917.

Sinn Fein MP and TD, Member of First Dail, War of Independence leader:
He was elected as Sinn Fein MP for Kilkenny city in by-election, 10 Aug 1917. A poster says: "VOTE FOR COSGRAVE - A FELON OF OUR LAND".
Elected TD for Sinn Fein in Dec 1918 general election in Kilkenny North, unopposed. James O'Mara won in Kilkenny South.
Treasurer of Sinn Fein. Imprisoned again.
Member of the First Dail. Could not attend first meeting in Jan 1919 because he was in prison. In the rollcall at the Dail's first meeting on 21 Jan 1919, "Liam Mac Cosgair" is absent, described as "fé ghlas ag Gallaibh" ("imprisoned by the foreign enemy").
He was released in 1919.
During the War of Independence 1919-21, W.T. was Minister for Local Government 1919-21 in the underground government, with the job of organising non-cooperation with the British authorities and establishing an alternative system.

He mar June 1919 to Louisa Flanagan [born 28th Aug 1882].
He moved 1919 to Beechpark, Templeogue, Co.Dublin. Beechpark was a wedding gift to Louisa from her father.
Although on the run, W.T. did much to undermine the existing institutions of local government, particularly after Sinn Fein swept the 1920 council elections.
Became an Alderman on Dublin Corporation after the Jan 1920 local election.
He supported the Anglo-Irish Treaty, Dec 1921.
Louisa appears in a story in [Ward, 1983]. There was a plan by Cumann na mBan members to protest the Treaty by raising the Union Jack over the building housing the Treaty debates to denote the betrayal that was taking place. They went to large shops looking for a Union Jack, "But Mrs. Cosgrave .. happened to be in the exclusive shop of Switzers" [on Grafton St] "and was told of what was happening. She of course immediately reported the plot."

First Prime Minister of Ireland ("President") 1922-32:
After the deaths of both Arthur Griffith and Michael Collins in Aug 1922, W.T. became head of the pro-Treaty side.
When the constitution of the Irish Free State was enacted Oct 1922, he became "President of the Executive Council" or head of government.
He was the first prime minister of Ireland ("President of the Executive Council"), 1922-32, covering the governments of 1922-23 and 1923-27 and 1927 and 1927-32.
He was Minister for Finance 1922-23.
The executions: During the Civil War of 1922-23, he and his Free State government took a ruthless stand against the anti-Treaty forces.
His government executed 77 republican prisoners in Nov 1922 - May 1923, far more than the British executed in the War of Independence. Anyone bearing arms on the anti-Treaty side was liable for a military trial and execution.
Those executed included Erskine Childers, hero of the Howth gun-running, and (without trial) Liam Mellows and Rory O'Connor (ignoring even the pleas of the Archbishop of Dublin, who spent hours with W.T., trying to persuade him to stop the executions).
W.T.'s house Beechpark was attacked and burnt down by the anti-Treaty side in Jan 1923.
The pro-treaty government party was re-named Cumann na nGaedheal Apr 1923.
W.T.'s government won, the anti-Treaty side gave up, and the Civil War ended May 1923.
W.T. was Cumann na nGaedheal / Fine Gael TD 1923-44.
He was re-elected TD for Carlow-Kilkenny, general election, Aug 1923, for Cumann na nGaedheal.
Beechpark was re-built 1924.
He was Minister for Defence 1924. He dealt with threatened mutiny 1924 by some old IRA officers in Free State Army, who planned to force the government to establish a Republic. The officers backed down.
Knight of the Grand Cross of the Order of Pius IX, 1925.
Friend of Frank Duff and supporter of Legion of Mary (founded by Frank Duff 1921).
TD for Carlow-Kilkenny until 1927.
TD for Cork city 1927-44.
He made the first Irish state visit to America in 1928.
He was asked in 1930 by the co-founder of the Irish Labour Party, William O'Brien, to grant asylum to Leon Trotsky, widely regarded as a mass murderer. Cosgrave refused.
W.T. Cosgrave's legacy:
Not everyone will agree on Cosgrave's legacy (or the legacy of any political figure), but here are the general arguments made for and against.
The main argument against Cosgrave would be the fundamental act of accepting the Treaty, and his government's atrocities in the Civil War:

As for arguments in favour, the case is often made that Cosgrave was the real founder of the state. The argument would be as follows:

Leader of Opposition 1932-44.
His party lost power to the formerly anti-Treaty side Fianna Fail in general election Feb 1932.
He led Cumann na nGaedheal in opposition after 1932.

The Blueshirts: Both sides flirted with non-democracy in 1932-34.
On the anti-Treaty side, now that Fianna Fail were in power, the IRA began to disrupt meetings of any opposition, with apparent government approval.
On the pro-Treaty side, Cumann na nGaedheal had links with the Army Comrades Association (the Blueshirts), which was formed Feb 1932 as an anti-IRA, anti-communist group to protect the opposition. The Blueshirts adopted symbols of then-fashionable European fascism. They were not a serious fascist movement (with racial beliefs etc.) though membership was restricted to Christians, and they did express support for aspects of European fascism.
Blueshirts re-named the National Guard, July 1933.
Cumann na nGaedheal was re-named Fine Gael after merger with Blueshirts Sept 1933.
But Fine Gael was dominated by the normal democratic party Cumann na nGaedheal, and the Blueshirts were finished by the end of 1934.

W.T. did support Franco in the Spanish Civil War 1936-39, as did the remnant Blueshirts.
For W.T. (and other Catholic democrats in Ireland who supported Franco) this was about supporting the Catholic church against communists who were burning churches and killing thousands of clergy, rather than about supporting non-democracy per se.
Opponents of Fine Gael still link them to the Blueshirts and fascism. However the people in Ireland who actually supported Nazi Germany in WW2 were the IRA.
Fine Gael were in fact the most pro-Allied party in Ireland during WW2. W.T.'s deputy leader James Dillon wanted Ireland to join Britain in the war effort against Nazi Germany. (W.T. himself supported neutrality.)

W.T. was opposition leader until he resigned from the Dail, Jan 1944.
He was member of Irish Racing Board 1945, chairman for many years. 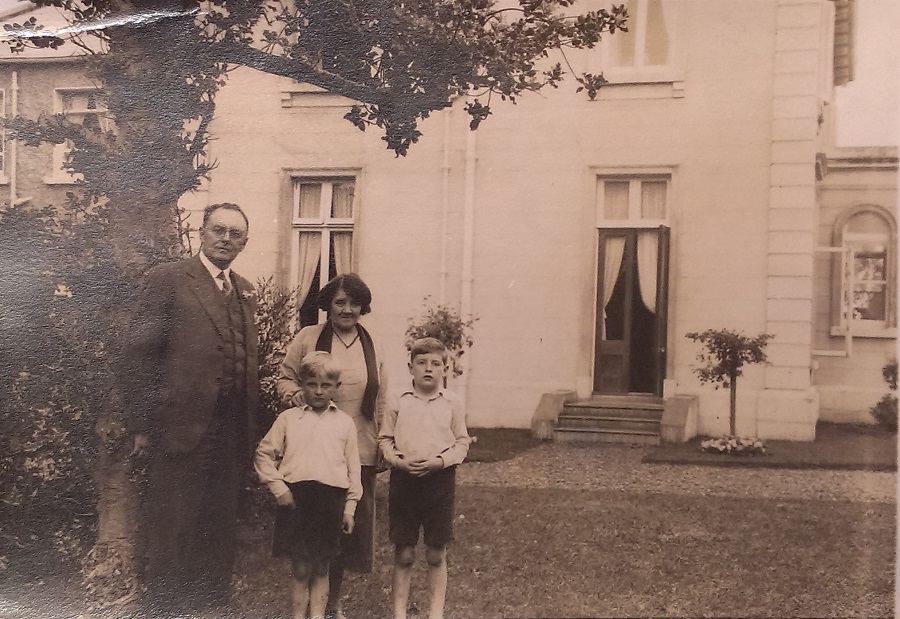 
W.T. Cosgrave pledges money to Michael Collins (centre), Minister for Finance of the underground Irish Republic.
This is a clip from the Republican Loan film, a fund-raising film shot at St Enda's, Dublin, in 1919.
Movie is here on my YouTube account.
Download WMV of clip.

Coverage of 1933 election.
Featuring W.T. and his wife Louisa Flanagan.
From British Pathe.