Dick died 1968.
His widow Eithne continued to live at Kingswood for many years.

Citywest Business Campus was established to the S of the house in 1990.
Eithne died 1995.
SAP, Europe's largest software company, opened their Irish headquarters just S of the house in 2001 (NOT 1997). Address: 1012-1014 Kingswood Ave, Citywest Business Campus, Dublin 24.
The Humphreys family left Ard Soluis in 2001.
The family sold Ard Soluis to the adjoining Citywest think 2001.
The house and site were sold for development.
See Kingswood after Humphreys.


Location of Ard Soluis, Kingswood.
The 3-pronged building is SAP building. Ard Soluis is just N of it.
Click to toggle map/satellite view. Click to zoom in/out. Drag to move.
From Google Maps.

Kingswood from an airplane, from the SW, shortly after it was built, c.1935.
Note the Dublin - Limerick road (the old Naas Road).

"Ardsolus" on a 20th century [OSI] map.
This is after the new Naas Road has been built (to the NW side here) but before SAP building built (to the S).
Entrance to the house is off the old Naas Road.

Screen shot of Ard Soluis on old Google Maps, before site was cleared.

Kingswood under construction, 1934. From the front (S side).

Kingswood under construction, 1934. From the back (N side).

Early photo of Kingswood from the road (from the N, back of house visible, avenue curves round to the far side of the building to the front door). 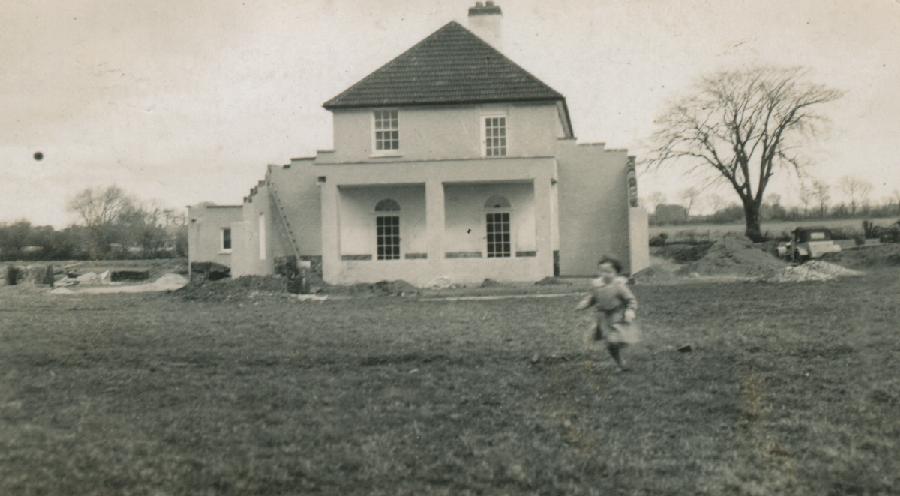 Laying out the lawn at the front (S side) of the house.

The only bit of Kingswood that survives is the fireplace, dated "1934".

The fireplace, saved and installed in another house.
The other house actually dates from 1936.
Photo 2018. See full size. See other shot.