Sir William Carr (see here),
born c.1705,
of Etal, Northumberland.
Sometimes Kerr.
He married before 1742.
Etal Manor (or Etal House), Etal, Northumberland, was built in 1748 for him.
Thomas Hopper and Margaret Smirk worked as servants for him. They were definitely working for him at Etal by 1752.
He considered himself as possibly heir to the Kerr Baronetcy of Greenhead, but this was not officially recognised. And indeed Sir William recognised this was not proved.
Sir Robert Kerr, 7th Baronet, of Greenhead, died in 1776 and the Baronetcy became dormant.
Sir William Carr considered himself as 8th Baronet but this was not officially recognised.
He died 1777.
He had issue:

KERR in the Complete Baronetage

Extracts from entry for Kerr, Baronets, of Greenhead, in [Complete Baronetage, vol.2, pp.427-430].
Sir William Carr claimed to be the heir to the Baronetcy, as did his younger brother after him. Their claim is taken seriously enough to be laid out in the Complete Baronetage, but neither was officially recognised. 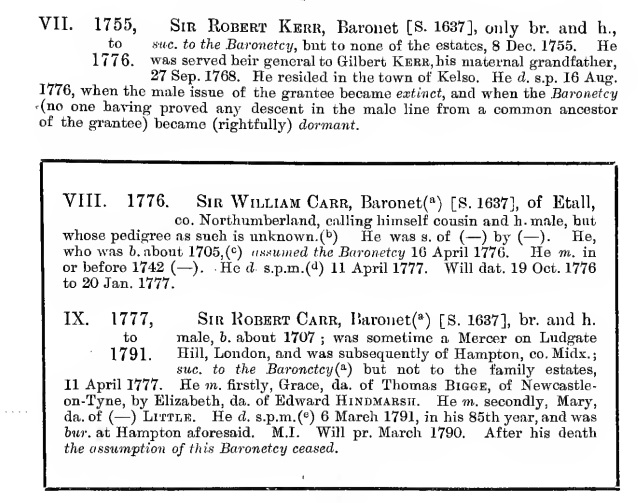 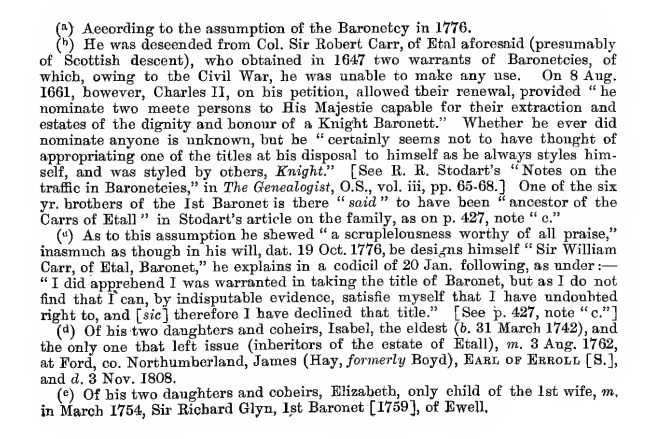