George Skene, of Rubislaw,
bapt 24 June 1666.
Professor of Philosophy and Regent of King's College, Aberdeen.
Barbara Yates Gibbon said he was "of Cariston" (which was one of the Skene properties, think Careston, between Dundee and Aberdeen).
He mar 20 Sept 1696 at St.Machar's, Aberdeen [her age 16, him age 30] to his 2nd cousin Catherine Ædie [bapt 7 Jan 1680].
He inherited Rubislaw, W side of Aberdeen, from his granduncle Sir George Skene (died 1707).
He died 12 Dec 1708, age 42 yrs.
He was bur St.Nicholas' church, Aberdeen.
Catherine remarried to Alexander Thomson.
George and Catherine had issue: 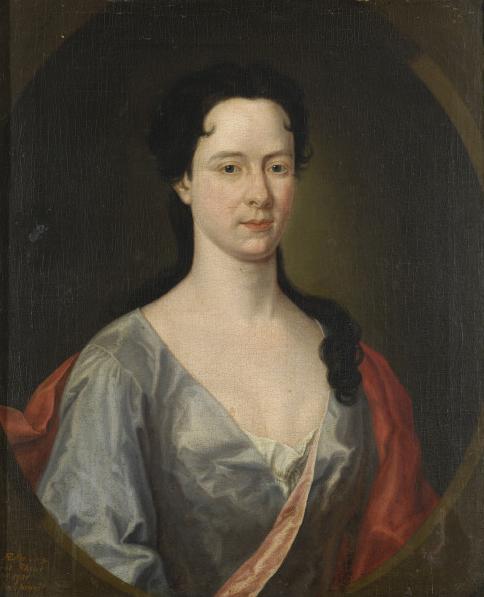 Catherine Ædie, by John Alexander, 1731.
From Aberdeen Art Gallery & Museums collections (see here). Used with permission.
This was purchased 1962 by Aberdeen Art Gallery from an Antique Dealer in Aberdeen.
Hangs in Provost Skene's House, Aberdeen.
She looks younger than her 51 yrs - she is probably painted deliberately younger to match her dead husband's picture.