Sir George Skene, 1687, attributed to Sir John Baptist Medina.
From Aberdeen Art Gallery & Museums collections (see here). Used with permission.
Black and white version printed opposite Page 180 of [Munro, 1897]. Page 183 says that as at 1897 this picture was in the possession of "Miss Skene, Folkestone" (a descendant of Skene of Rubislaw).
Purchased from Colin H.C. Graham in 1975 by Aberdeen Art Gallery.
Hangs in Provost Skene's House, Aberdeen.

Sir George Skene, Knt., Provost of Aberdeen (see here),
born 1619.
His father died 1631, when he was 12.
His half-brother David Skene took him to Poland and apprenticed him to George Ædie in Danzig.
He went on to make his fortune in Poland, trading in Danzig.

He returned to Aberdeen 1665.
In 1666 he purchased Wester Fintray (E of Kintore, see map).
In 1669 he acquired, as a town house, a house in Guestrow, Aberdeen which is now known as "Provost Skene's House".
The Skene coat of arms is in a number of places in the house.
He never married.
After his half-brother David Skene's death, he took care of his children to treat as his heirs. He married Katharine Skene to David Ædie, son of his old master, in 1671.
However, as [Skene, 1887] puts it, "his nephews George and Alexander turned out quite profligate and debauched", and robbed him, so he disinherited them and settled everything on the Ædies and on his other half-brother's descendants.

Acquired Rubislaw house and lands, just outside Aberdeen, in 1687.
He settled Wester Fintray on Giles Ædie by mar contract 1690.
He sold "Provost Skene's House" 1694 to David Ædie (who had married his niece).
He sp the bapt of David's grandson (i.e. his great-grandnephew) Norman Leslie 1697. He is described as "of Fintray".
Will dated 24 Mar 1707.
He settled Rubislaw on his grand-nephew George Skene.
He died 9 Apr 1707, age 88 yrs,
bur St.Nicholas' church, Aberdeen.
[Skene, 1887] reads the grave as saying 9 Apr, NOT 2 Apr.
Barbara Yates Gibbon said he "went to Poland on a diplomatic mission and was knighted on his return", and that he gave each of the Ædie girls ("celebrated beauties in their day") a good dowry.

Provost Skene's House at night.
Photo 2008 by Dale Walker. From here. See terms of use.
And similar shot from here.

[PORTRAIT of Sir George Skene, probably around time he was Knighted in 1681]
A different portrait to the Medina one above.
Hung in Gibbon family home in Aberdeen as at 1871.
Was in possession of "William F. Gibbon, Pershore" as at 1897.

Rubislaw is to the W side of Aberdeen (see map).
Sir George Skene, Provost of Aberdeen, acquired Rubislaw house and lands in 1687.
The "Mansion House of Rubislaw" dated from 1688.
It was on the road to Aberdeen.
The house in Rubislaw no longer exists. 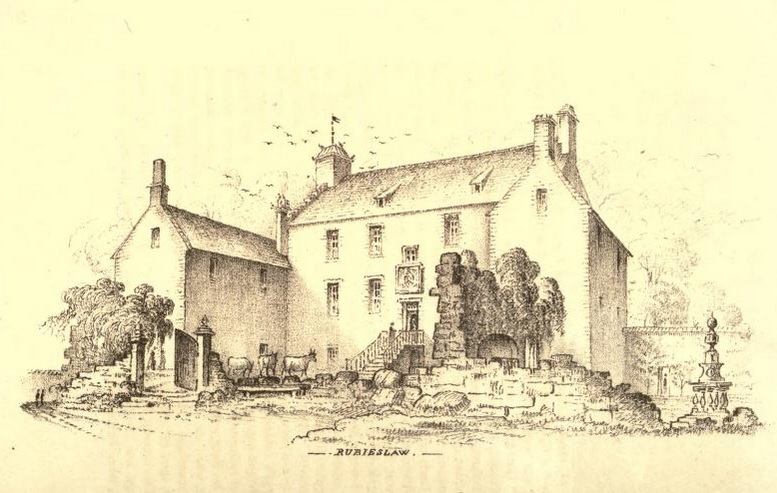 From 1901 map at old-maps.co.uk.
The area has been totally re-developed.
The "Lodge" to the SC here is the same as the "Lodge" beside Rubislaw Villa above. The road at an angle beside it is the old road up to the Mansion House of Rubislaw, which is now vanished, as is Rubislaw Villa.
The site of the Mansion House of Rubislaw is on the N side of Queen's Rd, just W of Spademill Rd. See satellite view.
See street view.