A hymn printed in 1714 by John Cluer in Bow Churchyard.
See full page. From British Museum.


John Cluer, born est c.1675.
He was a printer (publisher and printer of small items) in London.
He was apprenticed to Thomas Snowden in London on 6 May 1695.
See indenture from here in London, Freedom of the City Admission Papers.
He was freed from apprenticeship in 1702.
Freeman of Stationers' Company, 4 May 1702 [Stoker, 2014, p.155].

He set up his own printing business in Bow Church Yard, London.
The business is described on a visit to Bow Church Yard in 1763 as being run by the family for "fourscore" years, which would make it founded in 1683. This must be inaccurate. Most likely it was founded by John Cluer in 1702-1710.
The earliest surviving item from the Bow Church-yard press is dated 1710 [Stoker, 2014, p.155].
Mist's Weekly Journal for March 1718 had an ad for prints "At the Printing house in Bow Church Yard, London, by J. Cluer and Company".
In 1722 he partnered with his brother-in-law William Dicey in selling the patent medicine "Dr. Bateman's Pectoral Drops" (basically opium). He sold them in London.
He also sold the patent medicine "Daffy's Elixir".
He became a major publisher of music in London. He also did a lot of prints (pictures).
According to the London Journal of 13 July 1728, John Cluer and his foreman Thomas Cobb invented movable types for printing music.

A reference to an ad for Cluer's prints that appeared in Mist's Weekly Journal for March 1718.
From pp.282-283 of vol.3 of The Bibliographical Decameron (1817) by Thomas Frognall Dibdin.

1724 ad for "Daffey's Elixir" being sold by John Cluer in Bow Churchyard.
From British Museum. 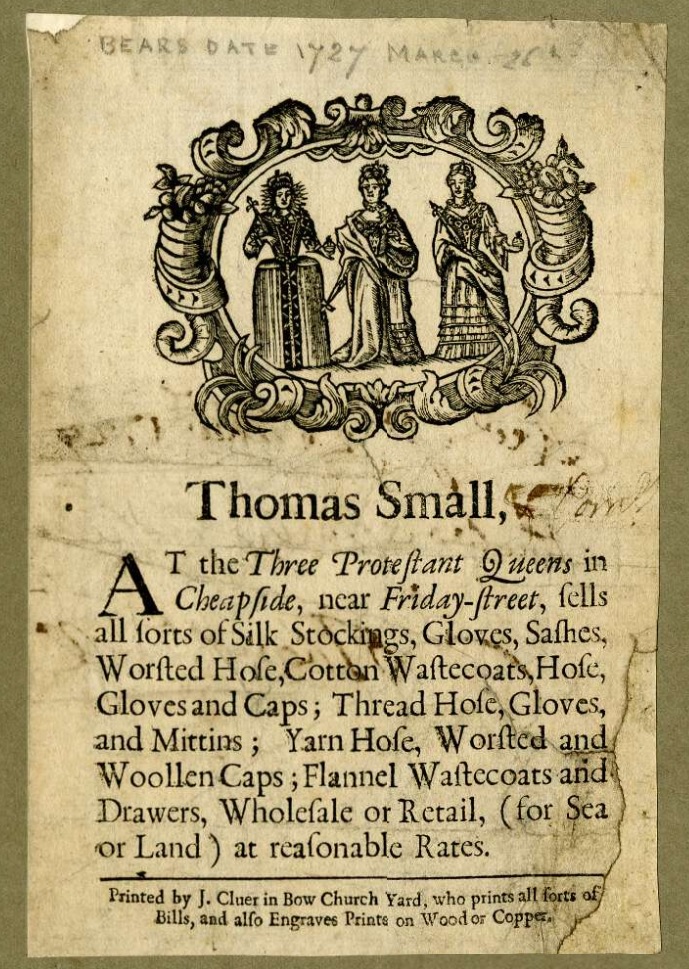 A trade card of 1727 printed by John Cluer in Bow Churchyard.
From British Museum.

Probate of will of John Cluer granted (in Latin) to Elizabeth his wife, 5 October 1728.