Cluer Dicey listed in the polling in the 1768 election for the 4 seats of the City of London.
Shows the 4 he voted for out of the 7 candidates (no secret ballot).
From here in UK, Poll Books and Electoral Registers, 1538-1893.
See front page.


Cluer Dicey (see here),
born 28 Jan 1715.
Printer and bookseller, newspaper owner, and patent medicine seller.
He joined his father in his printing and newspaper and medicine business in Northampton.
Like his father he was associated with the Leathersellers Company, though he did not practice that trade.
He became a freeman of the Leathersellers Company in July 1732 [Stoker, 2014].
In Nov 1736 his father took over the former John Cluer printing business in Bow Church Yard, London.
Cluer was sent by his father to London to run the business.

He mar 7 Oct 1738 to Mary Nutshawe [or Maria, of Cheshire].
She is "Mary" consistently in all children's baptisms.
He lived in London.
His children were bapt in parish of St. Mary le Bow, London, in 1739 to 1750.
He greatly expanded the business with his father.

1754 catalogue: Cluer printed a catalogue with his father in 1754.
His father died 1756.
Cluer inherited the business. Continued in both printing and patent medicines.

The young (22 year old) James Boswell visited Bow Church Yard in July 1763. He made a visit to: "the old printing-office in Bow Church-yard kept by Dicey, whose family have kept it four score years. There are ushered into the world of literature "Jack and the Giants", "The Seven Wise Men of Gotham", and other story-books which in my dawning years amused me as much as "Rasselas" does now".

In 1763, Cluer closed the printing office at Bow Church Yard, which now became dedicated to the medicine business. Printing moved to the Aldermary Churchyard office.
1764 catalogue: Cluer printed a 1764 catalogue with Richard Marshall. It shows they printed a range of maps, prints, music and chapbooks, "Printed and sold by Cluer Dicey, and Richard Marshall at the printing office, in Aldermary Churchyard, London".
[Simmons, 2000] says: "The 1764 catalogue .. was probably larger than any catalogue categorising and listing cheap maps, images and texts that had up to then appeared in the British Isles or probably in any European country."
Note says the 1764 catalogue "is an important source for the study of the lower end of the eighteenth-century book and publishing trade."
His company were the first printers of the nursery rhyme Simple Simon (1764).
He owned until his death the Northampton Mercury newspaper, which his father had founded.

In 1765 he purchased Claybrooke Hall, Leicestershire (some distance NW of Northampton).
The conveyance of Claybrooke Hall and lands from George Byrd to Cluer Dicey is dated 11 Oct 1767.
The family ended their printing business in London. There is no evidence of Dicey involvement in printing at Aldermary Churchyard after 1770 [Stoker, 2014]. Marshall and Co. continued to print at Aldermary Churchyard and became a huge operation.
Dicey printing continued in Northampton. Also Dicey ownership of the Northampton Mercury newspaper. And the patent medicine business in London.
His will is dated 17 Sept 1772. He is at Claybrooke. The will refers to Dicey business still at Bow Church Yard (patent medicine).

Cluer dies, 1775:
He died 3 October 1775, age 60 yrs, at Claybrooke.
His will says he is to be buried with his wife. But if she died before he came to Claybrooke, then he is apparently not buried at Claybrooke.
Memorial to him in St. Peter's Church, Claybrooke Parva (opposite Claybrooke Hall). The epitaph suggests he is buried here. Though, as we just explained, his will suggests he is buried elsewhere.
Dicey in DNB and [Burkes LG] think he was bur Claybrooke, though they may be just going by the memorial.
The religious writer Hannah More (a friend of the family) wrote an epitaph to him, which was inscribed on his memorial tablet.
Will pr 16 November 1775, Prerogative Court of Canterbury.
Cluer and Mary had issue:

Extract from DICEY in [Burkes LG, 1862].
This has Charlotte Kerr as dau of Cluer but she should be his sister.
See discussion: Charlotte Kerr is daughter of William not Cluer. 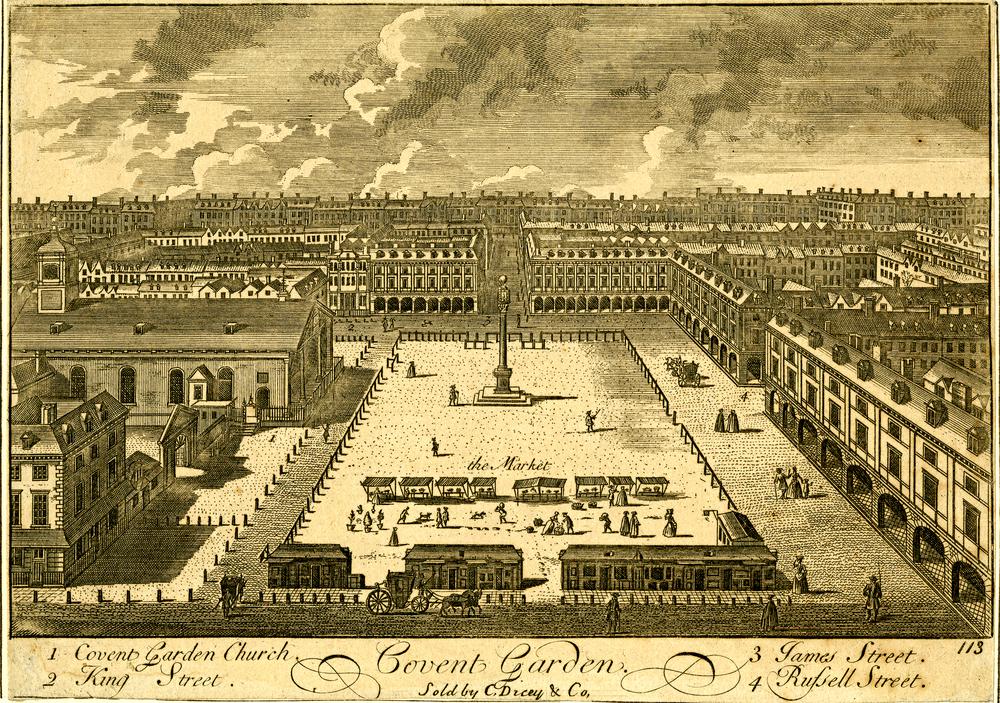 View of Covent Garden.
Print made by Cluer Dicey ("C. Dicey and Co."), c.1750.
Church on LHS. The house of Sir Thomas Orby is straight ahead here, in the arcaded building in the centre-left.
From British Museum.

The printer's name, "C. Dicey & Co." on a map of the Promised Land and Jerusalem, printed by Cluer Dicey, c.1765.
At this point the printing is all at Aldermary Churchyard.
See larger. For sale at Barry Lawrence Ruderman.

Cluer Dicey memorial, St. Peter's Church, Claybrooke Parva (opposite Claybrooke Hall).
The epitaph suggests he is buried here. Though his will said he was to be buried with his wife, which presumably is elsewhere.

Simple Simon met a pieman
Going to the fair;
Says Simple Simon to the pieman,
"Let me taste your ware."

Simple Simon (1764).
Cluer Dicey was the first printer of this nursery rhyme.