This medieval castle survives inside an 18th century house.

Booterstown Castle was built 1449 by Fitzwilliam of Thorncastle to defend Booterstown village.
It came into possession of their cousin Thomas Fitzwilliam before 1517.

One source identifies the small Wesley house of the early 1700s with Booterstown Castle.

[Ball, vol.2, 1903] says of Booterstown Castle: "vaults belonging to it are said to be incorporated in the house which stands upon its site".
No "vaults" are apparent today, but the N block of the house has 4 foot thick walls and is clearly the old medieval block, renovated in the 18th century.

Booterstown on John Rocque's map of Dublin, 1757.
Booterstown Castle is the L-shaped building opposite the "Mass House".
To the S of it, Booterstown House seems to exist.
There is a gap between the two.

Booterstown on map by Jonathan Barker, 1762.
Shows the old Catholic chapel.
Booterstown Castle is the small block opposite the chapel, a bit to the left.
To the S of it (to the left) Booterstown House clearly exists, opposite the lane.
There is a large gap between the two. 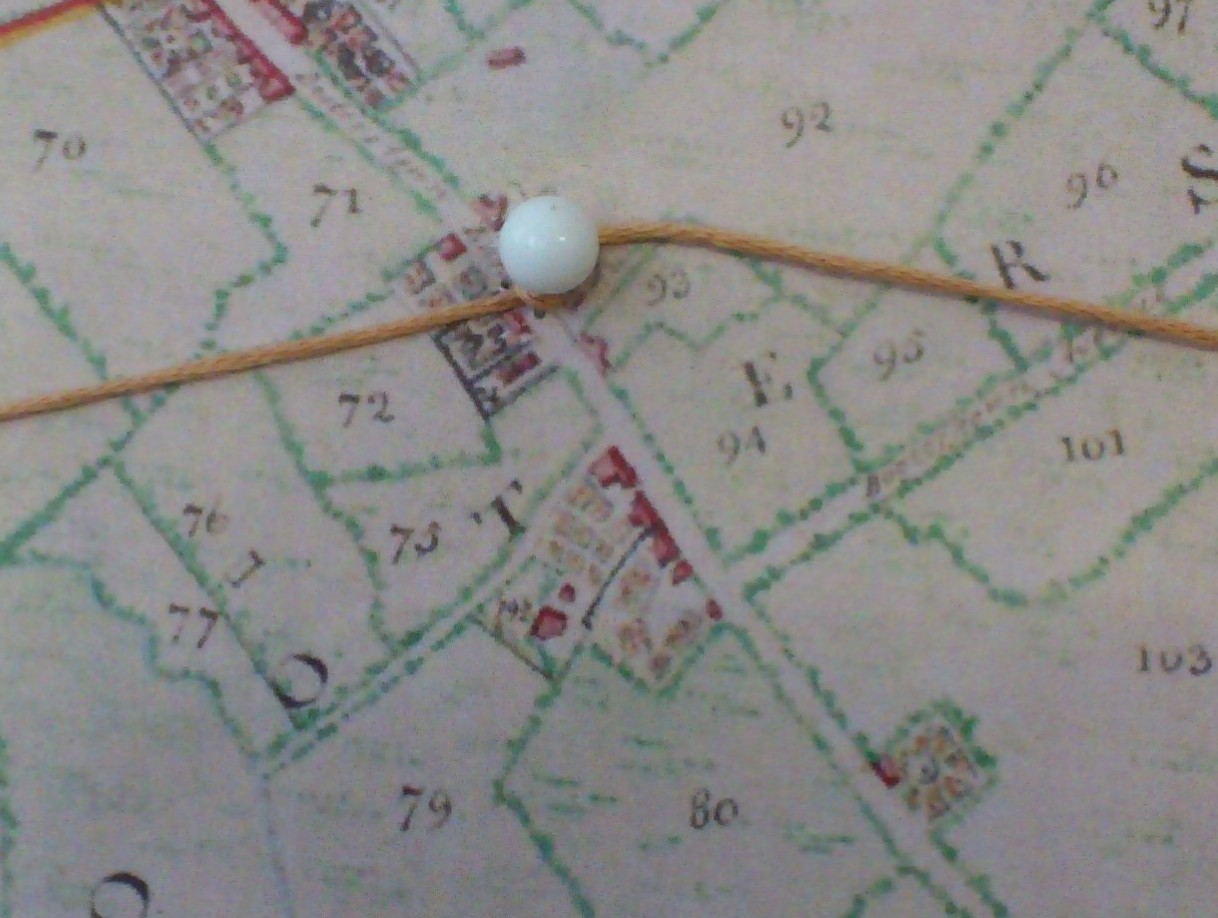 "The Castle House of Booterstown" for sale.
Freemans Journal, December 2, 1826.

[Pettigrew & Oulton, 1845] lists occupants of Booterstown in a line of houses.
When cross-referenced with the map, it can be clearly seen that Rev. Ennis is at Booterstown Castle.
Sweetman is at Booterstown House next door.
Rev. Byrne is in a house across the road, beside the church.
([McGahon, 2013] says a parochial house beside the old church existed by 1787.)

St.Mary's, Booterstown, rear.
The N part of the house (the RHS here) is the medieval castle block, renovated in 18th century.
The S part (LHS here) is an 18th century addition.
There is a lovely round window in the 18th century wall at the back.
Photo 2013. See full size.
See other shot.

The Wesley house at Booterstown

Richard Colley Wesley, 1st Baron Mornington, grandfather of the Duke of Wellington, had a small house at Booterstown in the early 1700s.
Mary Delany (see below) says this was in the time before he inherited the estate of Garret Wesley (i.e. before 1728).
An 1822 source (see below) identifies the Wesley house with Booterstown Castle.

Pat Roe's map of 1774 shows the medieval block was refurbished first, and only later (after 1774) was a S wing added. The medieval block by itself would have been a rather small house. It may be that the Wesley house was the small renovated medieval block alone, without any additional wing.

Mary Delany visited the Wesley house at Booterstown in 1732.
See p.345 of Vol.1 of Autobiography And Correspondence Of Mary Granville (pub 1861).
She describes the Wesley house as: "a little house about three miles out of town called Butlers Town".

The Freemans Journal, October 18, 1822, identifies the Wesley house with Booterstown Castle.
They also have a story that the 1st Duke of Wellington (born 1769) was born there (i.e. at Booterstown Castle).
It is generally thought that he was born in Mornington House, on Merrion St, Dublin (now a hotel).
The article is written after a speech in Dublin by Wellington's brother the 1st Marquess Wellesley (born 1760).
Note their aged mother Anne Hill was still alive at this point.

Famous quote about the 1st Duke of Wellington being born in Ireland: "being born in a stable does not make a man a horse".
This is often misattributed to Wellington, but in fact the remark was made by Daniel O'Connell about Wellington.
It is a put down of Wellington, not a put down of Ireland.
O'Connell made the remark at an 1843 speech, reported here at O'Connell's trial in 1844.
From Shaw's Authenticated Report of the Irish State Trials (1844), p.93.
Booterstown Castle may be the "stable".