And in particular the Garden Lodge in the formal gardens.


The Royal Hospital, Kilmainham, W of Dublin city centre.
Founded by 1st Duke of Ormonde for the care of old soldiers. It was inspired by the Hotel des Invalides in Paris.
Building started 1680, opened 1684.
The 1st Duke's arms are on the N front, looking over the gardens.
It is Dublin's first major classical building.
The gardens date from early 1700s.

The "Garden Lodge", built perhaps c.1730, is thought to be designed by Sir Edward Lovett Pearce, designer of the Irish Houses of Parliament.
It is a pretty little turreted house at the end of the formal gardens to the N.
You go down the stone steps into the garden, lodge at far end.
Two turrets, pointed roof, spiral staircase in RHS turret, gate into small enclosed stone yard at back.
Over the wall beyond it is St John's Rd, the dual carriageway running along past Heuston Station (the Garden Lodge is visible from the Dublin-Galway train).
[O'Brien and Guinness, 1994] say it was "originally a garden banqueting house".
Liam Cosgrave called it "the steward's or gardener's house", "The ruin of this house can be seen from St. John's Rd".

Heuston Station, then called Kingsbridge Station, and the GSWR line opened at the back of the house (to the N) in 1846.
Alderman Michael Flanagan lived in the Garden Lodge for a time around 1867.

The Royal Hospital was handed to Free State 1922.
The remaining pensioners left and the hospital closed 1929.
It fell into decay in the mid-20th century.

It was finally restored.
Beautiful restoration of main building finished 1984, like a new building suddenly arose in Dublin.
Although the interior was gutted to house the Irish Museum of Modern Art.
Garden Lodge beautifully restored 1991.
Also called the "Garden House". 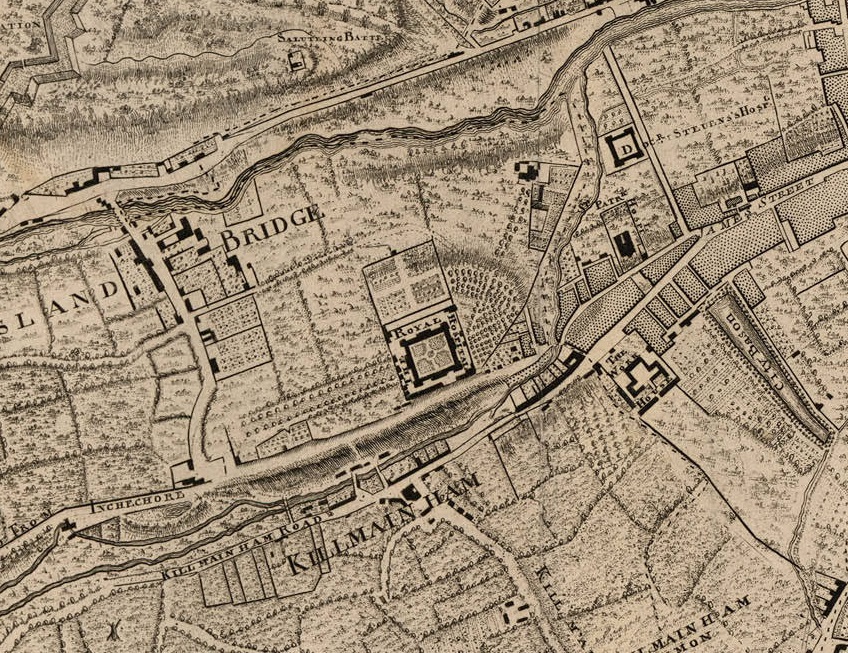 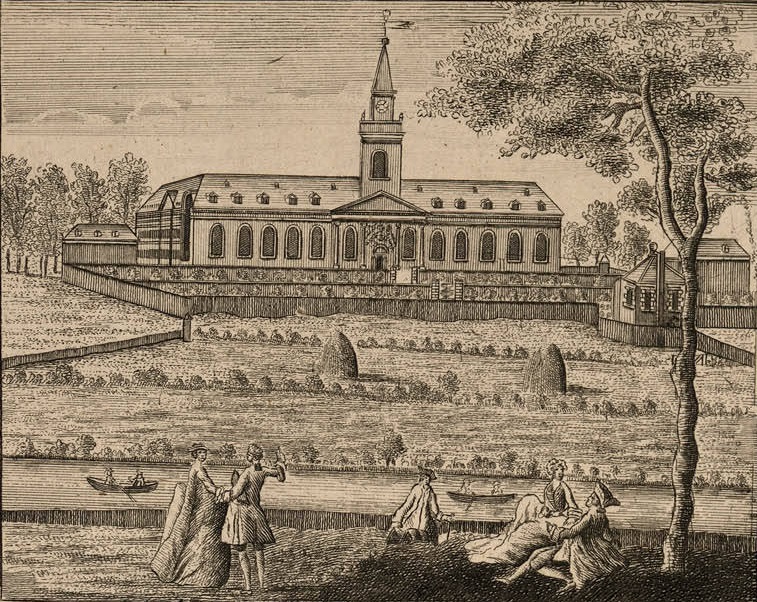 The Royal Hospital and the Garden Lodge.
Insert on John Rocque's map of Dublin, 1757.

The Royal Hospital and the Garden Lodge on 1797 map of Dublin.
See larger.

The Garden Lodge, N end of the garden of the Royal Hospital, Kilmainham.
On 1829 to 1842 map.
The road along the side and back of the garden seems to be a private road into the Royal Artillery Barracks to the W.
This barracks was later called Islandbridge Barracks, and then Clancy Barracks. It is now closed and being re-developed.

The Garden Lodge on map of c.1850 from askaboutireland.ie.
The railway has now been built.
The old barracks road is cut off.

The Garden Lodge (centre) in the formal gardens of The Royal Hospital, Kilmainham.
Photo from the SW (looking NE) 2000.

The garden, showing the Garden Lodge.
Photo 2007. See full size.
From here. See terms of use.

The Royal Hospital, from the garden (view from under the Garden Lodge).
Photo 2007. See full size.
From here. See terms of use.


Short movie about the Royal Hospital, Kilmainham.
From the RHK site.
Used here with the kind permission of the RHK.

Movie of courtyard.
From archiseek.com. Also here.
Starts in SE corner. Rotates to S side (museum) to W side (avenue) to N side, ends in NE corner.