Alderman Michael Flanagan (see here),
born Tallaght, Co.Dublin, bapt 29th Sept 1833.
For most of his life he was just called "Michael Flanagan", until he became an Alderman sometime in 1886-1894. After that, and after his death, he was always called "The Alderman" by the Flanagan family.
He was a hugely successful market gardener. Starting with very little he built up a business supplying the expanding Dublin city.
He eventually owned a massive farming estate across SW Co.Dublin, which reached 500 acres in size (was that size for all of 1895-1925 period).

Michael grew up on family farm, Greenhills, Tallaght, Co.Dublin.
He was taken by his father to see Daniel O'Connell speak c.1840.
He remembered The Famine (1845-50). [Frank Flanagan] said: "My father told me of the Famine, and the terrible times the unfortunate people went through".
He would be "Michael Flanagan" who sp bapt of his nephew Patrick Malone 1853.
He grew vegetables, starting on his father's small holding at Greenhills, Tallaght.
There is a story in the Ryan family that Marie Ryan (née Hughes) of Jamestown House, Inchicore (see 1829 to 1842 map), "walked out with" the Alderman when she was a widow [according to her descendant James Molloy]. The dates are unclear but it seems more likely she was a young widow (around the 1860s) rather than when they were both widowed in old age.
"Michael Flanagan" sp the bapt of his niece Mary Ellen Doyle 1865.
He wit his sister's mar, 6 Aug 1866 and got married himself days later.
He is listed as "gardener" (would be market gardener) at mar 1866 [GROI].
He is living Kilmainham at mar 1866 (possibly already living Royal Hospital, Kilmainham).
He mar 19th Aug 1866, RC chapel, Crumlin, S Co.Dublin [GROI] to Anne Collins [bapt 27th Nov 1842].
Marriage wit by Laurence Warren of Porterstown, Co.Dublin (see old map) and Mary Collins of Crumlin.

See entry in 1901 census at Portmahon House. He is listed as Alderman, Justice of the Peace, farmer.
Portmahon House has 13 rooms, 8 windows in front of house. There are 32 out-buildings - consisting of 6 stables, 3 coach houses, 1 harness room, 1 cow house, 1 calf house, 1 dairy, 1 piggery, 1 fowl house, 1 boiling house, 6 barns, 1 turf house, 1 potato house, 1 workshop, 4 sheds, 1 store, 1 forge and 1 laundry.
He is listed as Alderman, Justice of the Peace, in [Deed of 1902].
[Obituary of Nora Flanagan, 1957] says the hounds of the South County Dublin Harriers were kennelled at "Portmahon Lodge" around 1909. Think this is error for Portmahon House.
W.T. Cosgrave (son of Thomas Cosgrave) became Sinn Fein councillor for Usher's Quay ward in 1909. (W.T. would later marry Michael's daughter.)

The Alderman is listed in 1911 census as living Portmahon House. He is "agriculturalist", He and his children live with 2 servants. The house has 6 rooms, 3 windows at front of house. There are a total of 20 out-offices and farm buildings (consisting of 4 stables, 2 coach houses, 1 harness room, 2 cow houses, 1 calf house, 1 potato house, 6 sheds, 2 stores and 1 forge).
He sold vegetables to Covent Garden, London, 1912/13.
"He was most successful, and as well as supplying the Dublin market with vegetables, he exported to Liverpool and I think possibly the Continent before and during WWI." [Liam Cosgrave].
He exported hay to Glasgow, cabbages to Scotland.
The massive Flanagan estate of SW Co.Dublin probably reached its peak around 1914.
Liam Cosgrave says his father W.T. told a story of visiting Portmahon some time before he married the Alderman's daughter in 1919. The Bird was attacking Sinn Fein, not really to annoy W.T. but rather to annoy his own father. Eventually the Alderman said to The Bird: "Are you sober enough to know you're drunk?"

Retirement, 1919:
[Thom's, 1919] for Usher's Quay ward lists Michael Flanagan as Alderman, W.T. Cosgrave as Councillor, and two other Councillors.
Lived to see many great-grandchildren (1919 on), the grandchildren of Elizabeth and Larry.
He finally retired from Dublin Corporation 1919, age 86 yrs.
He was succeeded as Alderman by his son-in-law W.T. Cosgrave who became an Alderman after the Jan 1920 local election.
He lived to see a number of the 4th generation, outlived most of his children.
[Frank Flanagan's memoirs] said: "no matter how busy he was, he went to 12.00 mass daily until his last illness".
Liam Cosgrave remembers going to 12 mass in Adam and Eve's on Merchants Quay in the trap with his grandfather the Alderman, late 1920s. Poor fellas would be hanging round outside. The Alderman would throw them six pence.
Liam remembers the Alderman using a trap in the 1920s. He was not interested in getting an automobile. His son Frank eventually bought him his first car.
Liam said the Alderman had a strong voice. When there was a game of cards on "you could hear him in the next parish".
Liam recalls visiting Portmahon House in the 1920s, with the Alderman upstairs confined to bed, and his unmarried sons Michael (died 1929) and Frank living there.
There is a letter of 1980 by his great-grand-niece Marie Boyce (born 1923) recalling visiting Portmahon House as a child: "There was a very old gentleman on a couch who looked very much like George Bernard Shaw. My mother said he was Uncle Mike".
His will is dated 14 Mar 1930. Liam Cosgrave says the Alderman left a provision in his will that if there was any contest, they would forfeit - ensured no rows.

Death, 1931:
He died Portmahon House, 16th Oct 1931, age 98 yrs.
See obituary in Irish Times, October 17, 1931.
Funeral 19 Oct, bur Glasnevin Cemetery.
Mass celebrated by Fr. John Flanagan, also presiding was Michael Fogarty, Bishop of Killaloe.
Present at the funeral were the Alderman's son-in-law, the President of the Irish Free State W.T. Cosgrave, and his entire cabinet, and a long list of politicians and clergy, including Eoin MacNeill and John A. Costello and Sean Mac Eoin and Batt O'Connor and Sir Thomas Esmonde and The Ceann Comhairle and The Chief Justice and The President of the High Court and The Lord Mayor.
See funeral report and photo in Irish Times, October 20, 1931.
See notice to creditors in Irish Times, October 28, 1931.
Will pr 13th Nov 1931 [NAI] ref. IA-7-45, "farm produce merchant".
Personal assets £18,600, land £6,500. This totals about £5m in today's money. But also many debts.
Michael and Anne had issue:

Baronetcy story: The Alderman was apparently offered a baronetcy in 1900 if he would become Lord Mayor and receive a Royal visit, and he refused.
If he had accepted, he would have been the 1st Baronet.

Alderman Michael Flanagan with his grandchildren Liam Cosgrave (left, born 1920) and Míceál Cosgrave (right, born 1922).
Garden party at the Cosgrave house, Beechpark, 1925.
The officer on RHS is Free State General J.J. O'Connell, who was kidnapped by the republicans at the start of the Civil War, June 1922 (later released unhurt).
See larger and full size. 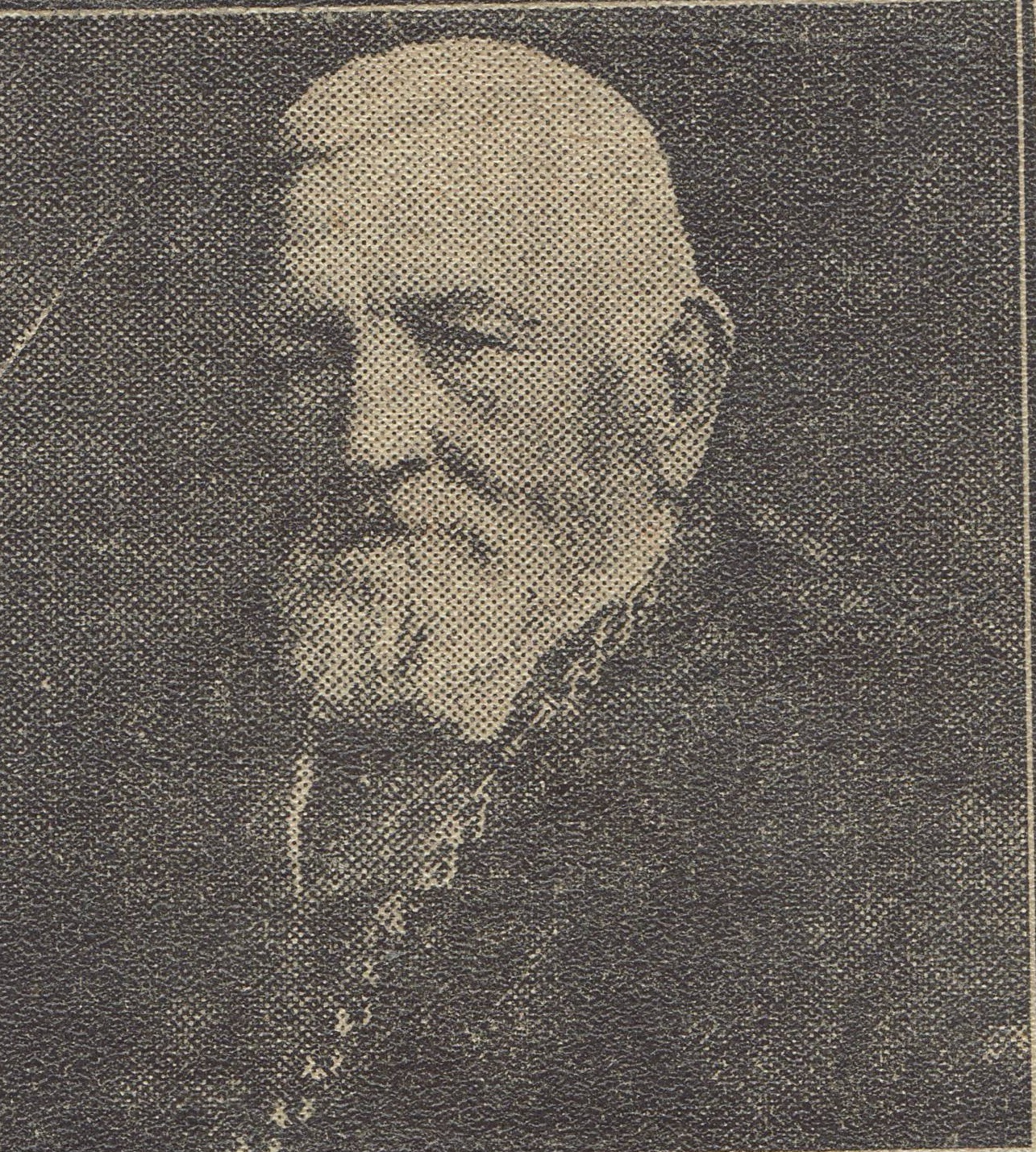 Deeds yet to be consulted