Of the family Keith, hereditary Marischals of Scotland:

Sir William Keith.
He mar Margaret Fraser [descendant of David I, King of Scotland and of Henry I].
Marischal of Scotland 1354.
He died 1407-1410.
They had issue: 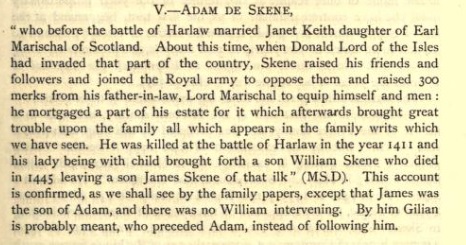 Extract from p.15 of [Skene, 1887].
This says that Adam Skene, Laird of Skene, married before the Battle of Harlaw, 1411, to Janet Keith, "daughter of Earl Marischal of Scotland".
Skene supported his father-in-law in the battle. He was killed in the battle.
Who Janet is is unconfirmed.
Donation Drive