Henry Noltie,
born c.1740, Germany.
Well educated, spoke a number of languages.
Trained as a barber surgeon.
Valet to Prince of Bar, apparently late 1750s:
[Noltie family memoir] says Henry went into the service of the "Prince de Baar" as a page or valet, and travelled on the continent with the Prince's young son (he had a tutor) "Count de Baar".
This probably refers to Charles, Prince of Lorraine and Bar (born 1712, died 1780) who by his mistress had a son Charles Frederic (born 1749, died 1810, age 61) and by his 2nd wife had a son, Charles Alexandre Guillaume Joseph (born 1757, died 1832).
[Noltie family memoir] says Henry once saved the life of the Prince's son, "the Count": "when crossing a river, being pursued by some German, or Prussian Hussars ... in which skirmish my father received a cut in his hand from a hussar's sword, for which service the Count became much attached to my father, as all the rest of the Count's retinue fled and left the Count and my father to defend themselves, the best way they could."
Note that during the Seven Years' War (1756-1763), Charles, Prince of Lorraine and Bar, was one of the leaders on the Austrian side against the Prussians. He commanded the Austrian army at several battles in 1757 against the Prussians, and in 1757 retired.
The dates would fit if it was his natural son Charles Frederic (born 1749, age 8 yrs in 1757).
[Noltie family memoir] says that Henry and "the Count" and his tutor fled to England, and took up abode in "the Cannon Hotel, Cannon St, Cockspur St, London".
This place is unidentified. Cannon St and Cockspur St are far apart from each other.
Henry left the Count's service after an incident with the tutor: "My father having charge of the Count's wardrobe and jewels, the Count's court dress, with the necessary jewels, was laid out for the Count to dress, to go to Court in, and the room being on the ground floor, the tutor opened the window, and some thieves entered, and stole the court dress and jewels. The tutor denied opening the window, and my father insisting that he did, angry words passed, which ended in my father leaving the Count's service, much against the Count's will, and although repeatedly requested to return, he would not so long as the tutor remained, and as the tutor was engaged by the Count's father, the Count had it not in his power to discharge him".

Valet to Capt. Boyd:
Henry, with the help of the Count, gained a position as valet to "the Honourable Captain Boyd", with whom he stayed for some years.
Given his later service to James Hay (formerly Boyd), 15th Earl of Erroll, this could be James Hay himself when he was known as Boyd before 1758, or it could be (perhaps most likely) his brother Capt. William Boyd, or (less likely) his brother Capt. Charles Boyd when he returned from exile around 1766.
Henry stayed with Capt. Boyd "till the Captain went to the E. Indies, his master pressing him, and making him handsome offers to go with him ... my father repented afterwards in not going to India with so generous a master."
He then travelled on the Continent with several families, as a courier and interpreter.

Valet to Earl of Erroll, and his widow, c.1768 to 1780:
Henry in c.1768 became valet to James Hay (formerly Boyd), 15th Earl of Erroll, "with whom he stayed for upwards of 10 years till the Earl's death" (Earl died 1778).
Henry settled in Scotland.
He would have worked at Slains Castle, Aberdeenshire.
Henry met his future wife Mary Hopper 1770. She was working as maid to Isabella Carr, wife of 15th Earl.
Dr. Samuel Johnson and James Boswell were guests at Slains Castle in 1773. Wonder if Noltie met them.
The Earl of Erroll died in 1778. Henry "remained with the Countess of Erroll, as her butler, till he married my mother" [Noltie family memoir].
He clearly set up in business shortly before marrying in 1780. At marriage he is listed as "merchant", living in Old Greyfriars parish, Edinburgh.

Henry mar 8 Jan 1780, Greyfriars church, Edinburgh, to Mary Hopper [born 18 Feb 1754].
[Noltie genealogy] says mar 10 Jan, but parish records say 8 Jan.
The marriage of her butler and maid "displeased the Countess, as my father would stay no longer with the Countess, but bought a house in .. Edinburgh" and left her service to set up business, and of course her maid left too.
The Countess of Erroll is Isabella Carr, widow of 15th Earl. Her sons were only children at this time.

Valet to Farquharson of Haughton, c.1790:
Henry was persuaded perhaps c.1790 to go abroad with Francis Farquharson of Haughton (born est c.1770, died 1808) as his valet and interpreter.
[Noltie family memoir] says Henry spent several years travelling on the Continent with Francis Farquharson.
When they reached Italy, Francis Farquharson became ill with a fever, and his younger brother Alexander Farquharson joined them at Rome (this is NOT the father Alexander Farquharson who died 1788). "and then [young] Mr. Alexander took the fever, and died near Rome in my father's arms, but Mr. Francis recovered, and returned home."
While Henry was gone his business in Edinburgh failed.
He was declared bankrupt. The house on Frederick St was sold.
In c.1792-93 Mary and her only surviving child Henry went to live with her parents in Durham.
Henry Noltie is not listed in [Edinburgh directory, 1793-94].

Henry dies, 1811:
He died at Haughton, 11th Sept 1811, age c.71 yrs.
His son on one sheet says Sept 1812, but the context suggests an error for 1811. His son on multiple other sheets says Sept 1811.
Henry was buried in the old Kirkyard of Alford, near Haughton. No gravestone.
It is the spot where his son's Henry's gravestone is. We know this because his son Henry said he wanted to be buried "beside my father in Alford Churchyard, where he is buried in the ground formerly occupied by the old Andersons of Dorsell. I think his is the 3rd grave from the Minister's garden dyke". This is exactly the spot where the Henry Noltie gravestone now is, so this is the spot where the father is buried too.

Charles, Prince of Lorraine and Bar.
Henry Noltie apparently worked as valet for him in late 1750s.
Portrait 1743.
From Wikipedia. Original at Kunsthistorisches Museum, Vienna. 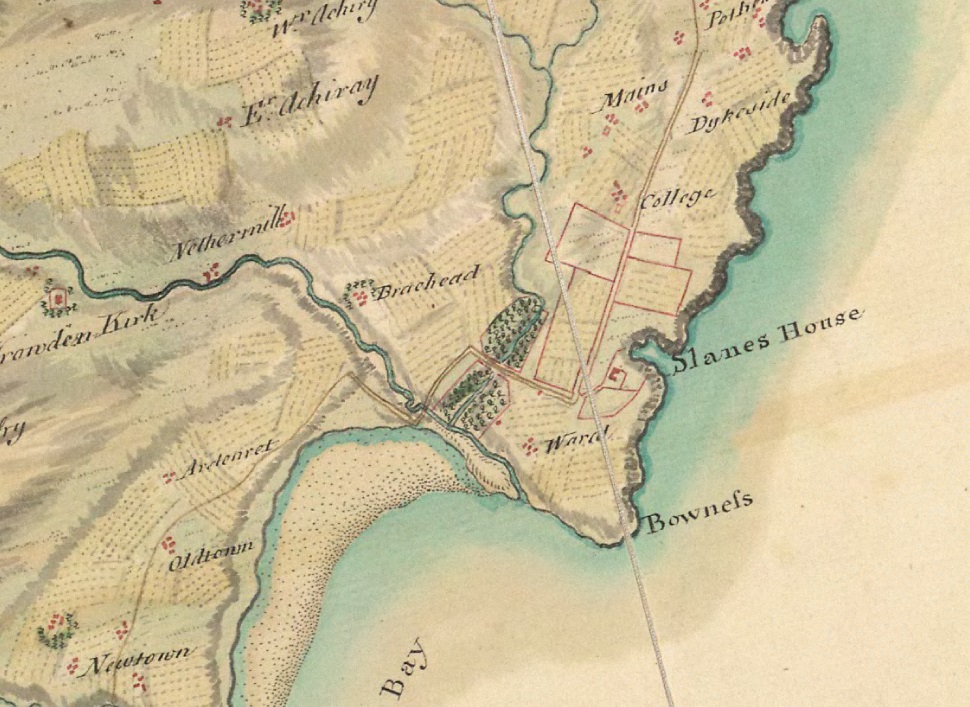 Slains Castle, Aberdeenshire (built 1597, seat of Earl of Erroll).
Detail of Roy Military Survey of Scotland, 1747-55.
Henry Noltie would have visited/worked here in c.1768 to 1780, as valet to the 15th Earl of Erroll and butler to his widow.

Henry Noltie listed as grocer at Rose St, Edinburgh, in [Edinburgh directory, 1786-88].
Later he was at Frederick St, Edinburgh.