Henry Noltie,
born Nov 1788 or 1789, Frederick St, Edinburgh.
In c.1792-93 he was taken by his mother to her parents in Durham.
He was educ in Durham.
Returned to Scotland c.1795-96.
He "was boarded at a farm called Ballgrave" near Edinburgh, where he went to school. This place is unidentified.

Becomes servant to Farquharson:
In 1800 (age 11 or 12) he became a servant to John Farquharson of Haughton (born 1779), brother of his father's master Francis Farquharson.
John Farquharson was then age 21 and an officer in the naval service of the East India Company.
Henry was sent to join Farquharson in London, arrived Jan 1801 [Noltie family memoir].
He was to join him as a servant at sea.
"It was most unfortunate for me that my father would send me to sea with Mr. F., as a little before he [Mr. F.] came home I was to have been put into Heriot's Hospital, Edinburgh, through the influence of the Earl of Erroll, and his [my father's] master Mr. Francis Farquharson, where I was to be educated for a Copperplate Engraver, which was the trade I chose."

In 1803 he first saw the infant Janet Smith, daughter of some other Farquharson servants. 20 years later he would marry her.
After about 9 months back in Britain (early 1804), he and Farquharson were again ordered to join the Perseverance.
They went to London, where Farquharson lodged at 32 Surrey St, Strand (this street has been heavily re-developed, no.32 may be gone, see map).
Farquharson fell dangerously ill with pleurisy.
As Farquharson got worse under treatment by the ship's doctor, Henry went and got another doctor, who bled him. Farquharson recovered, and [Henry's memoir] of course credits the bloodletting of the second doctor. (Modern medicine would suggest this was not the reason.)
Henry and Farquharson joined the Perseverance as it was about to sail from Gravesend to China.

Farquharson parted company with the Perseverance.
[EIC ships] shows 3rd voyage of Perseverance, left Britain on 4 Mar 1806, but without Farquharson. Also 4th voyage.
Henry met his father at Edinburgh and they travelled with the Farquharsons to the Farquharson country seat at Haughton, near Alford, Aberdeenshire (NW of Aberdeen).
"About the month of August" [year not specified] "my master, his brother and me came to Haughton; my father and me on horse back, and the gentlemen in a carriage."
Henry was left at Haughton at school, until his master got a new ship.
"then about December" [year not specified] he was told to come to Edinburgh as Farquharson needed him.
He sailed for Edinburgh from Aberdeen in a smack "on old Christmas day".
But off Inverbervie they were "driven back to Aberdeen by a violent gale of wind, and [I] was nearly lost in getting into a boat to be brought ashore."
He finally got to Edinburgh by mail coach.
In Feb 1808 his master John Farquharson was in London planning another voyage to Penang, Malaysia, when his brother Francis Farquharson died and he unexpectedly inherited. "if his brother had lived another month, he would have been on his voyage then".
Instead "my master gave up his situation" and after arranging his affairs, returned to Edinburgh in autumn 1808. The Farquharson house in Edinburgh was sold.
John Farquharson took a house nearby in Queen St, Edinburgh (see map), for a year "till Miss Ann died" [unidentified].
John Farquharson is listed at 58 Queen St, Edinburgh, in [Edinburgh directory, 1808-09].
Then "Miss F." [must be John's sister Mary] "and my master and my father" came to Haughton.
After a few months they left Henry's father living at Haughton, and he and Farquharson travelled round England with "Miss F." They visited London, Chudleigh, Bath, Cheltenham and other places. Periodically returned to Haughton.
They spent winter 1810 in Edinburgh. Came back to Haughton summer 1811.

Henry (unmarried) had a relationship (must be 1811-12) with Isabella Riddell [of Upper Banchory, Aberdeenshire].
Henry's own notes spell her "Isobel Riddle" and "Isoble Riddle" but elsewhere he is casual with spelling.
Not sure why he did not marry her.
[Henry's memoir] says in 1812 he and Farquharson went to Monymusk, Aberdeenshire.
Farquharson married Mary-Anne Grant of Monymusk on 17 Sept 1812 (days after Henry's illegitimate child was born).
Henry and Isabella had issue:

He mar 17th May 1823, Haughton, to Janet Smith [bapt 22nd Feb 1802].
He farmed at East Gallowhill from 1822 to his death.
He wrote Noltie family memoir c.1839.
He gives advice to his children: "I .. sincerely recommend to you all to cultivate brotherly love .. and to assist one another in every possible way ... either by precept example or worldly goods. Should any of you be more prosperous in the world than another, I think it is the bounden duty of the prosperous brother or sister to assist their poor brothers and sisters ... Now if you really believe (and I hope and trust there is none of you, my dear children, has a heart of even doubt, far less of unbelief) that there is a great and merciful God".
And some writing of its time: "having living examples of His judgements in His formerly highly favoured people the Jews, who are exiles and wanderers to this day to teach us to beware of disobedience".
He also made out a Noltie and Hopper genealogy.
They are listed in 1841 census at "East Gallowhill". He is "farmer".
Census of 1851 has them at "Gallowhill".
He is described as "farmer, Gallowhill" on grave. 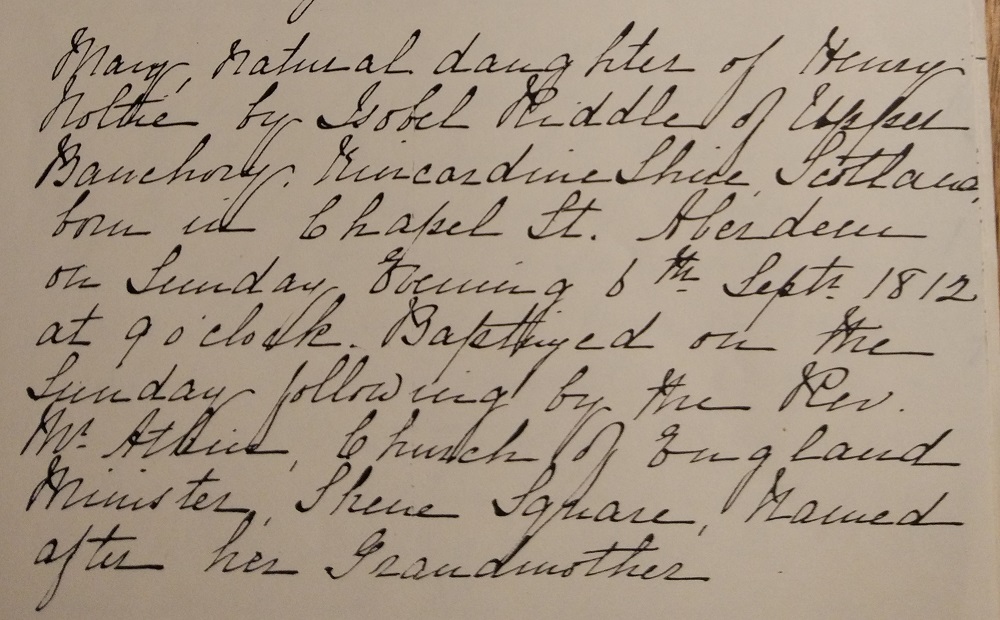 From p.10 of Noltie genealogy.
Henry Noltie acknowledges his own natural child.

Henry Noltie and family listed in 1841 census at East Gallowhill.
It notes that he was not born in Aberdeenshire.
See full size.

The bell of the Perseverance (launched 1801).
Recovered by divers at Whale Rock, South Africa.
Photo 2012 from Andy Walker, who sold the bell in 2012.
See full size.
This is a modified photo, with a busy background removed using clippingmagic.com. See original.
See also photos of left and centre and right, showing the bell spells it "PERSEVERENCE".
Though [EIC ships, 1811] spells it "PERSEVERANCE".

Grave of Henry Noltie (died 1852).
In the old Kirkyard of Alford, Aberdeenshire.
This is the spot where his father Henry Noltie of Germany is buried too (though without mention on a gravestone).
It is also the grave of his son Henry Noltie (died 1892).
Grave no. 46 in [Alford grave inscriptions].
Location of grave: Go in gate. Far LHS corner. 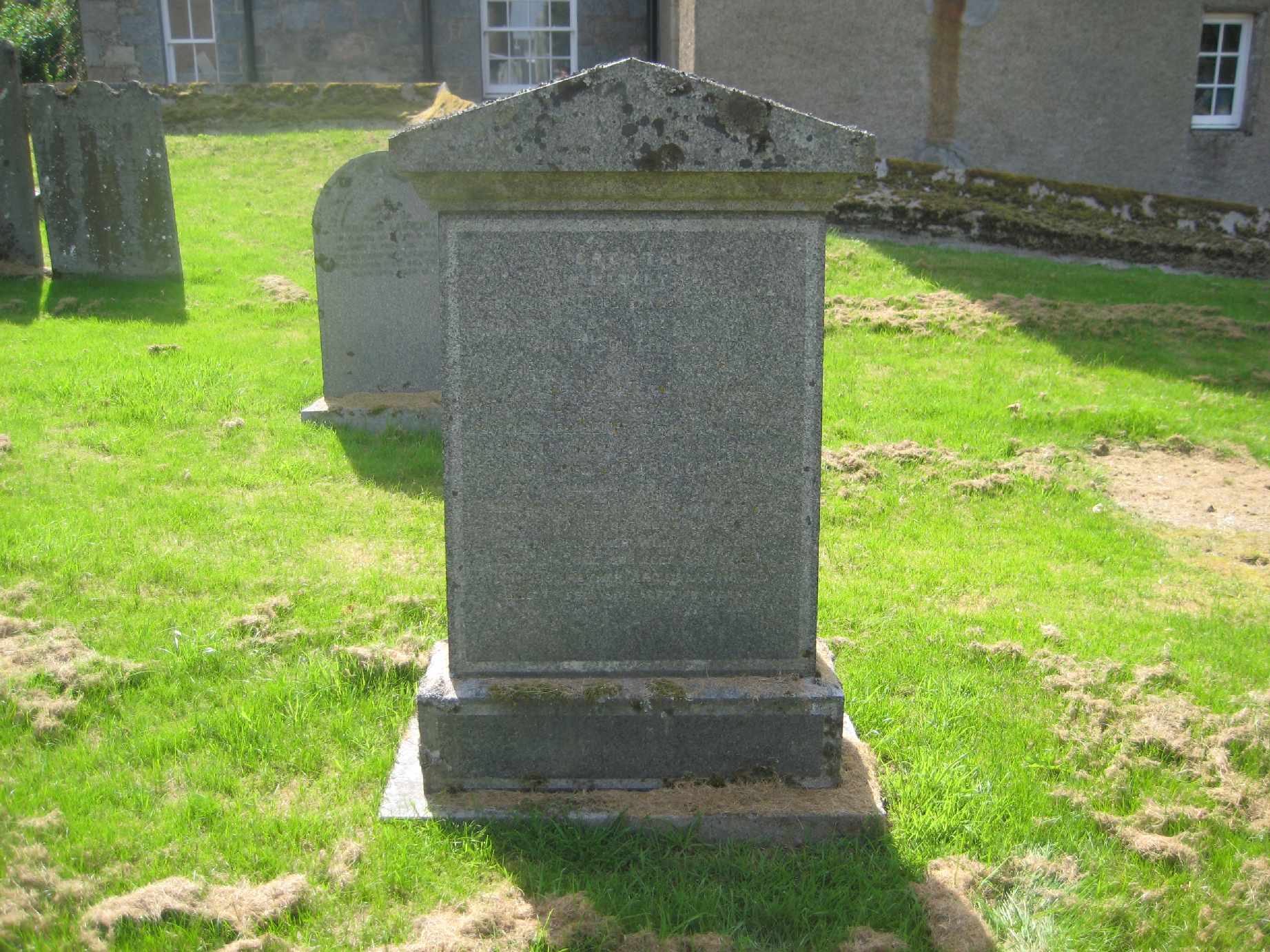 "As there is nothing so certain as death, and none knows how soon he may leave this world, we should frequently meditate on that event and accustom our minds frequently to think on that which is certain will happen to himself in a very few years at farthest"
- Henry Noltie.