Royal Descents of famous people - Common ancestors of all humans

Common ancestors of all humans

It has been known since Darwin's work in the 19th century that all of humanity (indeed all of life) is on one family tree. In other words, there existed in the past animals who are common ancestors of all humans now living. What this page is about is when was the most recent common ancestor of all living humans. A number of new strands of evidence indicate it was surprisingly recent, even within recorded history. 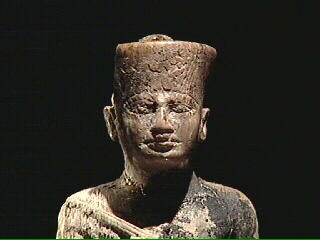 The Ancient Egyptian Pharaoh Khufu (or Kheops or Cheops) reigned 2589 to 2566 BC,
built the Great Pyramid, and left a line that almost certainly did not die out.
Hence he is probably the ancestor of every human on earth today.
Image from here. More here.

For ignorant reasons, the origins of life and humanity are often not discussed in schools, so you may need some background reading before you start:

The MRCA is human

[O'Connell, 1995] is wrong to suggest there is any doubt about the existence of CAs. Their existence is certain, as is the fact that the MRCA is human. The existence of genes for human abilities (e.g. language acquisition) in all humans is proof of this.

Ways to find the MRCA

In general, there are a number of ways to estimate the MRCA:

The conclusion of the above lines of evidence is the following.

This is not about DNA (Genealogy is not Genetics)

To see this, imagine one Western European sailor blown off course in classical times, say 100 AD, and landing in the Caribbean, with no way home. He is not killed but rather taken in by a tribe who need strong young men.

By 1492, all of the Caribbean is descended from him, but his DNA is extinct. There is no evidence of his existence in the DNA of the living. He is everyone's ancestor, but no one has his DNA.

In summary, we are interested here in genealogical descent, not genetic descent.

There are some interesting consequences of this world view.

If you have a line of descendants that doesn't die out, eventually you are the ancestor of the whole future world. Through this, you affect all future world history. If the humblest Ancient Egyptian peasant had done anything different (even just had sex 5 minutes earlier), there would have been no Jesus, no St.Paul, Muhammad, Copernicus, Newton, Darwin, Marx, Freud, Lenin, Stalin, Hitler or Mao.

There would have been no Christianity, Islam, Marxism, Freudianism, communism, Nazism or Maoism. These are belief systems, collections of beliefs accepted due to charismatic founders.

There would still have been Copernicanism, Newtonianism and Darwinism. - These are discoveries about the world, that would be made no matter what.

In the future, there will be a new MRCA

Finally, remember that all these CAs are moving targets. These CAs are defined relative to the world in the state it is in now, i.e. in 2000 AD. If we were living in 1000 AD, we would be talking about a completely different MRCA. Similarly, someone alive today (maybe you, maybe me) is an MRCA of the world at some future date.

There has been media coverage of my work on MRCAs. See various links in:
Radio interview with me on "The Connection", NPR, 2002.
Length 48 minutes.