William Cecil, 1st Baron Burghley.
Portrait by unknown artist. He wears his robes of a Knight of the Garter.
This is a picture from the NPG used at Wikimedia Commons. NPG has said low-resolution images can be used.

William Cecil, 1st Baron Burghley,
born 18 Sept 1520.
See Wikipedia and thepeerage.
For 40 years (1558-1598) he was a chief advisor (Secretary of State and Lord High Treasurer) to Elizabeth I.
He has been described as the "chief architect of Elizabethan greatness".
He was educ St.John's College, Cambridge.
He mar 1stly to Mary Cheke and had issue:

Mildred died 4 Apr 1589, at their townhouse, Burghley House, The Strand, London, age 63 yrs.
She was bur with her dau Anne in Cecil tomb at Westminster Abbey.

Burghley was Lord Privy Seal from 1590 to death 1598.
He died 4 Aug 1598, age 77 yrs, at Burghley House, The Strand.
Most sources say he was buried at St. Martin's church, Stamford, Lincolnshire, where there is a monument.
Though [Brayley, vol.2, 1823] says he was buried in the Cecil tomb at Westminster Abbey.
See Portraits of 1st Baron Burghley.
He had issue by 2nd wife: 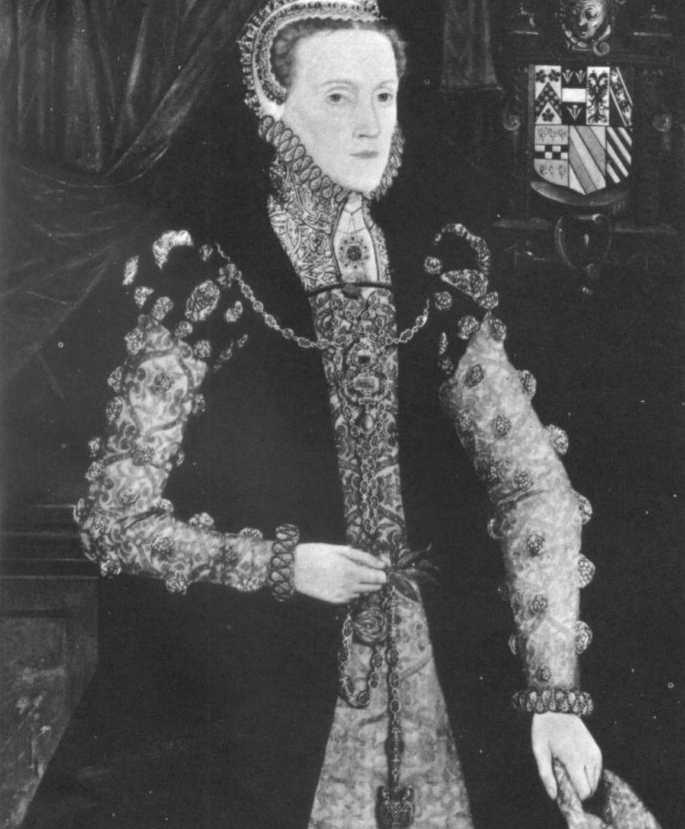 Death of Mildred in 1589 at Burghley House, Westminster, London.
On Cecil tomb at Westminster Abbey.

Birth of Anne Cecil in 1556, on Cecil tomb at Westminster Abbey.

Cecil House (later called Burghley House and then Exeter House), N side of The Strand, London.
London town house of William Cecil, 1st Baron Burghley.
Built as "Cecil House" 1560.
Became known as "Burghley House" after he was created Baron Burghley 1571.
His wife Mildred Cooke died there 1589.
Burghley died there 1598.
It became residence of his son the Earl of Exeter. Became known as "Exeter House".
It was replaced 1676 by Exeter Exchange.
See "Exeter Change", Exeter St and Burleigh St on 1792-99 map.
Exeter Exchange was demolished 1829.
The site is now Strand Palace Hotel.

The Strand, London, on Norden's map of Westminster, 1593.
Note "Burleigh House" on N side of The Strand.
See full size.
From London Maps and Panoramas.