He mar 8 Feb 1808, St.Peter's, Monkwearmouth, to Hannah Harrison [Hannah Joanna Harrison, born 1788, England].
Robert Gibbon, of Monkwearmouth, was owner of the ship Galatea from 6 Dec 1808 to 24 May 1810.
Robert Gibbon of Monkwearmouth subscribed to a book of poetry, Epistles in Verse between Cynthio and Leonora, in three cantos, descriptive of a voyage to and from the East Indies, by George Marshall, Newcastle, 1812.
"Robert Gibbon" and "Hannah Gibbon" witnessed his brother Arthur's marriage in Oct 1814 at Bedlington, Northumberland, N England (a bit N of Sunderland).
He might be "R. Gibbon" who was owner of the ship Castle Forbes (built 1818). "R. Gibbon" is still listed as owner in 1831.
They would be Robert Gibbon, born Scotland but not in Fife, and Hannah Gibbon, born England, who are listed in 1841 census at North Queensferry, Dunfermline, Fife (near Edinburgh).

Hannah died 1846, age 58 yrs.
Her address in burial record is Southwick, beside Monkwearmouth, Sunderland.
However the [England, Select Deaths and Burials, 1538-1991] index says she died in Liverpool (and was bur Monkwearmouth).
She was bur 15 Aug 1846 in Monkwearmouth.

Robert died 31 Dec 1848, age 67 yrs.
Gibbon papers say he died at what looks like "Perla Bella". Probably "Perta Bella" and this is Portobello, Edinburgh.
He was buried in, or at least named on, Gibbon grave at Nigg Bay, Aberdeen.
Robert and Hannah had issue:

Burial of Hannah Joanna Gibbon, 15 Aug 1846 in Monkwearmouth.
From here.

The letter is in collection BB.7.1 (1800-1804 papers) in section 2.2. C (Demerara: Court of Civil Justice) in 1.05.21 (Archives of the Dutch colonies of Essequibo, Demerara and Berbice, in what is now Guyana, South America). At the National Archives of the Netherlands.

How did the letter end up in Guyana papers? It is a complex story.
In the letter, Robert Gibbon writes to Capt. Napier of the British ship Margaret, departing from England, bound for Grenada, West Indies. Gibbon requests he accept on board a passenger Dr. Ironside, bound for Grenada.
The Margaret left Portsmouth on 2 or 3 Mar 1804.
It was chased and captured by a French ship in the West Indies on 23 Apr 1804.
The French captors landed in the Dutch colony of Berbice (now in Guyana), where they were detained, and hence these papers survive.

Map from Bing showing the area of the Margaret's capture.
The Margaret was headed for Grenada.
It was chased and captured by a French ship near Barbados on 23 Apr 1804.
The French captors took it E along the coast of South America, headed for Suriname or for Cayenne in French Guiana.
But, uncertain where they were, they landed early, in the Dutch colony of Berbice (now E Guyana, where New Amsterdam is), where they were detained.

Barbara Yates Gibbon writes on 14 June 1864 after her children died. 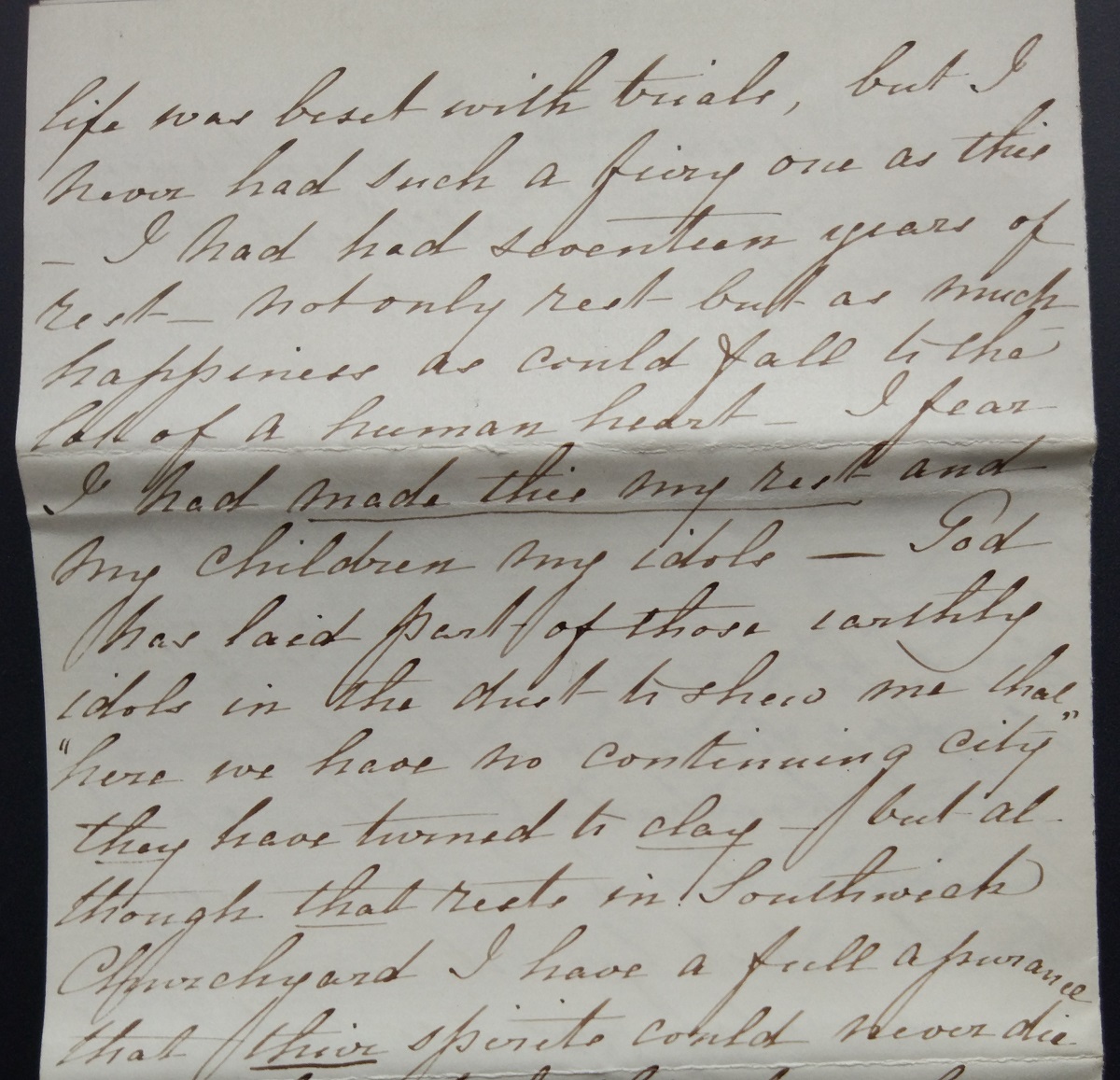 "My dear Arthur, my early life was beset with trials, but I never had such a fiery one as this. ... I had had 17 years of rest" [since her father died] "- not only rest but as much happiness as could fall to the lot of a human heart. ... As it is, a curtain has fallen down never to be raised on this side of Jordan."