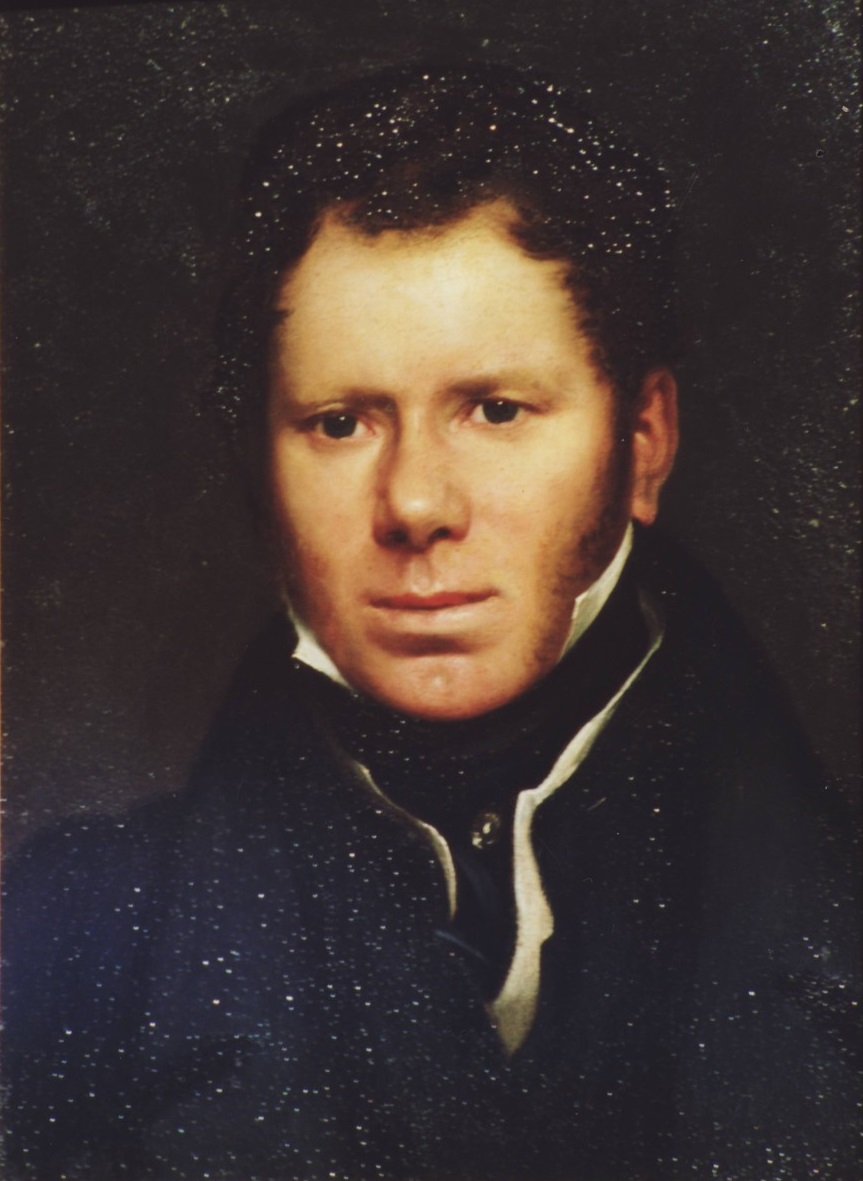 Arthur Gibbon.
Portrait perhaps c.1825 (it was a pair with the one of Elizabeth Montgomery).
See larger and full size.
See other scan.
See label at back.

Arthur Gibbon,
born 7 July 1780.
Descendant of Robert III, King of Scotland and of Henry I.
See Wikitree. This thinks he was a JP, but gives no source.
See entry in Wyndham Marsh genealogy.
He was from Aberdeen, Scotland.
At marriage he is described as merchant, of Aberdeen.
He mar 11 Sept 1814 to Elizabeth Montgomery [born 12 July 1796, descendant of Edward III].
See marriage in 1814.
He was age 34, she was age 18.
She was the niece of the 11th Earl of Pembroke and had a great inheritance.

Postmarital contract 2 May 1815, Aberdeen. He is described in it as merchant of Aberdeen.
He is listed as merchant of Aberdeen at Deed of gift from Sir Alured Clarke in June 1822.
See Letter of Aug 1822 from Elizabeth's uncle the 11th Earl of Pembroke to her.
Think he is "Arthur Gibbon, merchant" listed at 6 Castlebrae, Aberdeen in [Aberdeen Directory, 1824-25]. This is Castle brae, which ran from Castle St to Virginia St. Think now vanished, see map.
Think he is "Arthur Gibbon, merchant" listed at Commercial Bank Court, 42 Castle St, Aberdeen in [Aberdeen Directory, 1825-26].
See Letter of Nov 1827 from Elizabeth's brother to her, after the death of their uncle the 11th Earl of Pembroke. This and other letters are addressed simply to "Mrs. A. Gibbon, Aberdeen" but still got there!
The 11th Earl left her an annuity in his will (proved 1827). See extract. From Gibbon papers.
He is listed at the family home, 11 Virginia St, Aberdeen, in [Aberdeen Directory, 1827-28] to [Aberdeen Directory, 1829-30]. He is "Arthur Gibbon, merchant".
Arthur is listed at Arthur Augustus' bapt Apr 1829 as "merchant", living at Virginia Street, Aberdeen.
Their eldest child Emily died May 1829.

They move to England:
They seem to have left Scotland for England c.1830, and never returned except on visits.
He is listed as gentleman, living Acklington Park, Northumberland, as at birth and bapt of William Henry 1832.
Living at Acklington Park in 1833, when he gets shooting permission on the local estate.
There was an auction of all the beds, carpets, curtains, crockery and furniture at Acklington Park, 6 Apr 1836 and following days. See poster. It seems they were selling much of their possessions before moving to the Continent. No portraits in sale, they kept those.

Lived on Continent, around 1837 to 1857:
They travelled on the Continent widely. They were in Heidelberg, Germany, 1837, and seem to have lived there for some time (William Henry was educ there). Their daughters later married on the Continent.
They were in Heidelberg as at Letter of Dec 1842 and Letter of Feb 1843 and 1844 letter.
See poem of May 1849 written by Arthur's sister Ann Gibbon to Elizabeth. It lists what Elizabeth's children have done.
Arthur's sister Ann Gibbon in Jan 1850 letter seems to refer to Arthur and Elizabeth as now "the Munich people".
Catherine Woronzow (widow of the 11th Earl) writes to "my dear Elizabeth" in May 1850, settling further financial affairs on the "occasion of Margaret's marriage".
Letter of 1 Sept 1851 says they are living in Munich.
They are in Munich in letters of Nov 1851 to Mar 1852. See letters of 13 Nov 1851 and 28 Nov 1851 and 22 Feb 1852 and Mar 1852 envelope.
Arthur's passport survives, issued 3 Aug 1853.

See letter of 5 Nov 1853 from Elizabeth to her son Arthur Augustus, after the death of Margaret's children: "These, oh these, are some of the bitter trials of our lives, and those only who have experienced such bereavement can only know what others feel. It is indeed a very hard fate to think that dear Margaret has been doomed to lose both her children in so short a period of time."

Catherine Woronzow wrote to Elizabeth in Feb 1854. Elizabeth is at Stuttgart.
Catherine Woronzow left them further money when she died in March 1856. See extract from will and letter of June 1856. This was probably the final financial break with the Herbert family.
Arthur is described as "gentleman" at son William Henry's mar Nov 1856.
Elizabeth's passport survives, issued 8 July 1857. They travelled on Continent until late 1857. 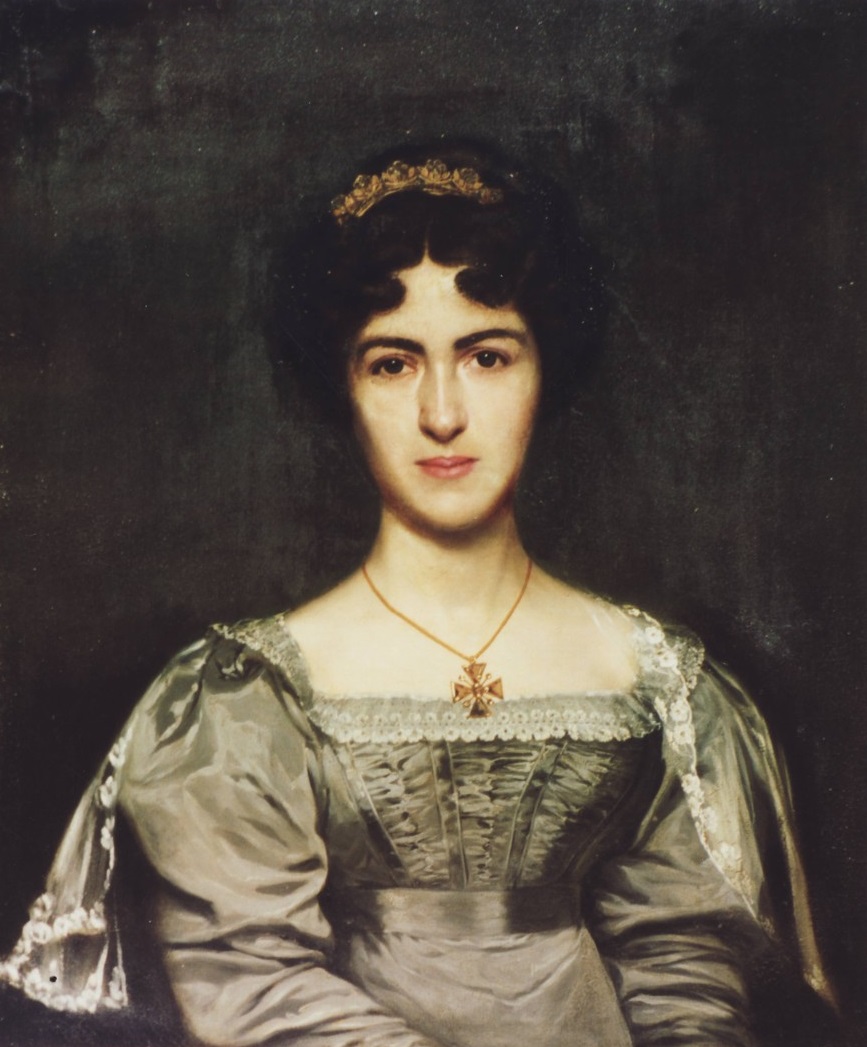 Elizabeth Montgomery.
Portrait perhaps c.1825 (it was a pair with the one of Arthur Gibbon above).
See larger and full size. 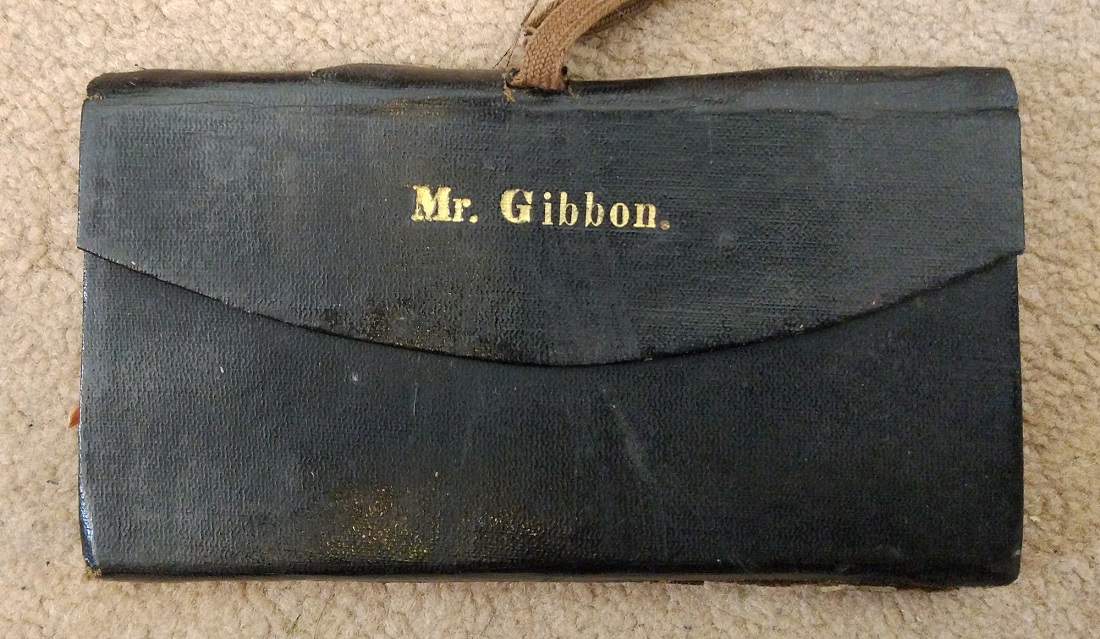 Arthur's passport from 1853.
See larger and full size.
See UK government travel declaration inside, dated 3 Aug 1853.
Passport is for Arthur Gibbon, with wife and servant, "travelling on the Continent". 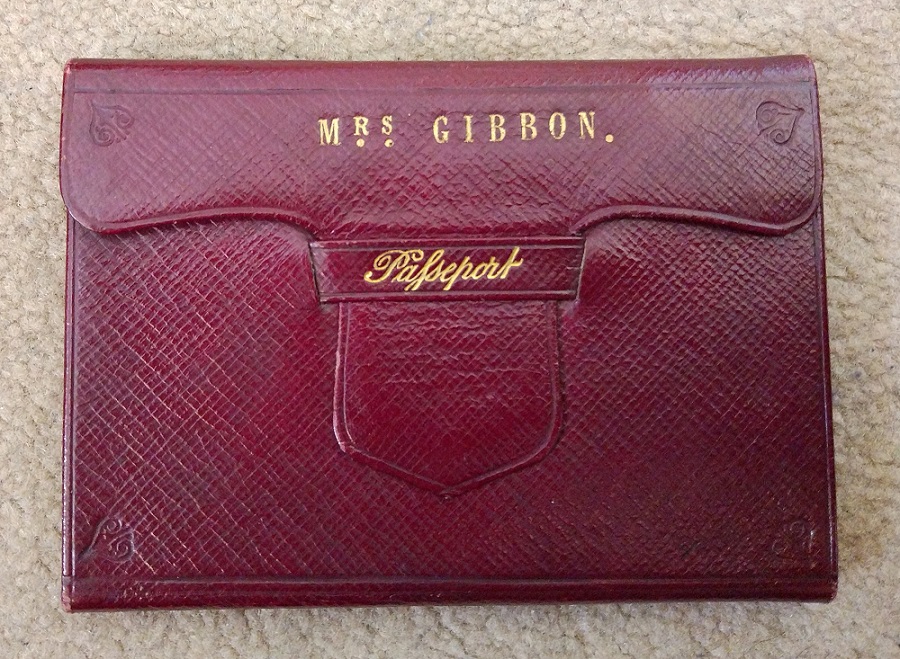 It was my initiative that got Arthur Gibbon into Burke's Peerage.
Burke's Peerage announced with the re-booted 106th edn in 1999 that they would list natural children of the Peerage. So I contacted them and told them about the Reebkomp-Gibbon line. This was included in the 107th edn in 2003. 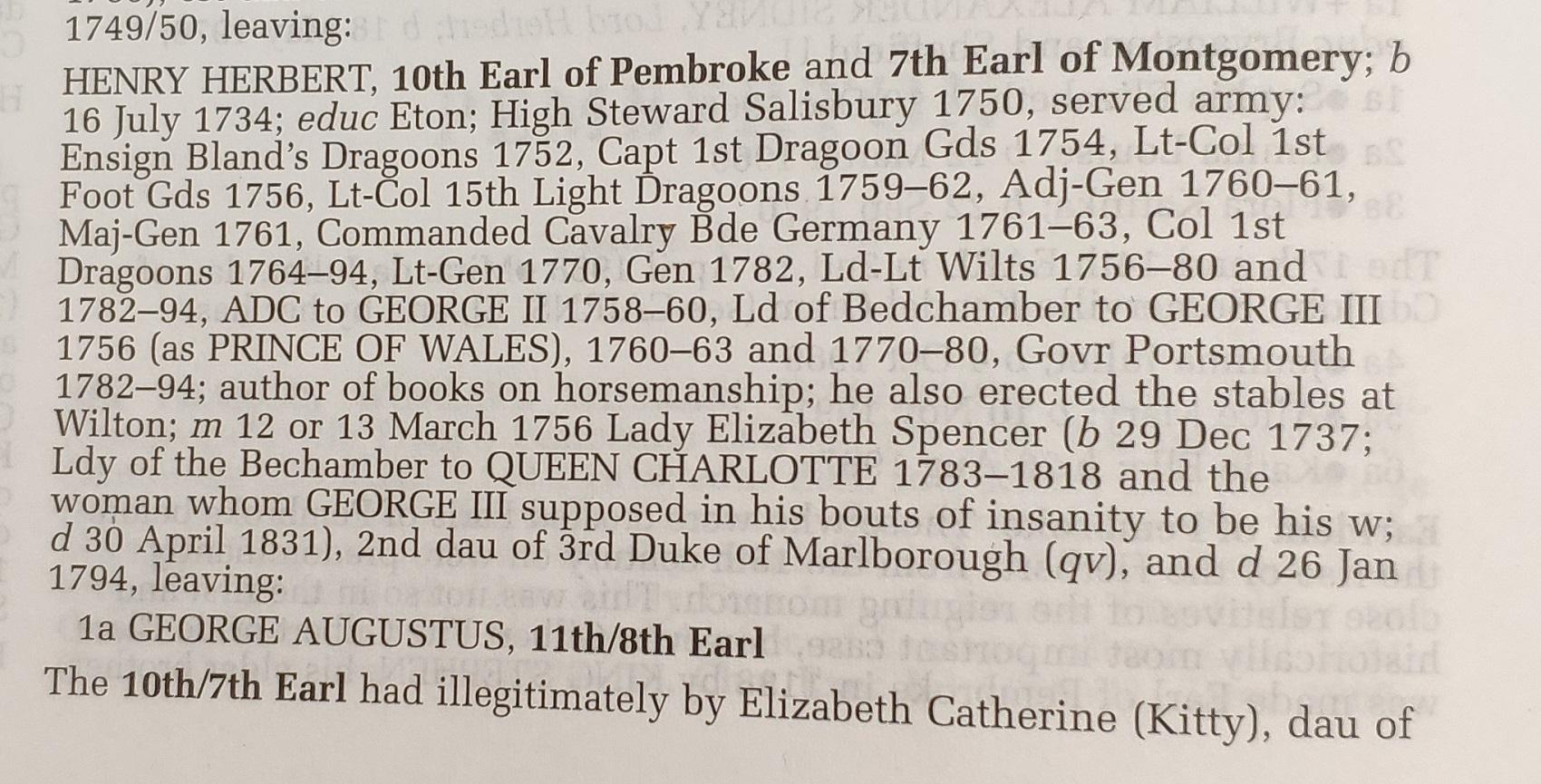 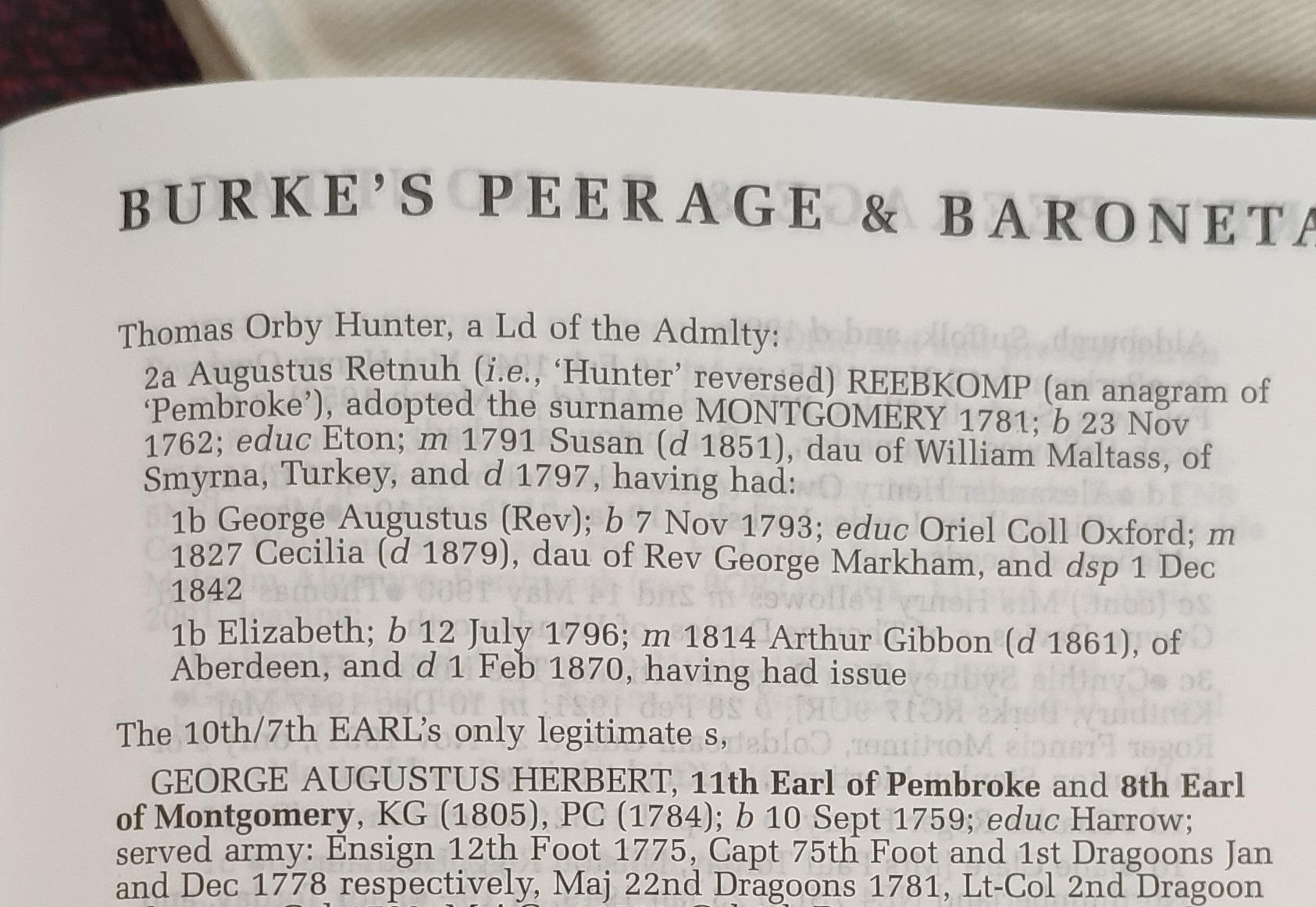 Gibbon listed under PEMBROKE in online version of [Burke's Peerage, 2003].
See other version.