Humphrys ancestral farm, Doonane townland (341 acres), Killoscully par, NE of Newport, Co.Tipperary.
On slopes of Keeper Hill. In the Barony of Owney and Arra. Not far from Co.Limerick border.

Humphrys (or Humphreys) at Doonane

Humphrys came to Doonane by mid 18th century.
Doonane was home of William Humphrys (born 1717 or 1720, died 1792 or 1799) as shown by his grave.
[Religious Census 1766] shows Humphrys family on N and NE side of Newport. In Union of Kilnarath, it shows William Humphrys, family of 5. This may be our William Humphrys of Doonane. Though Doonane is Killoscully par, further N than Kilnarath par.

Michael Humphrys is listed at Doonane at bapt of his children in 1815 and 1820.

See Doonane on p.66 of [Griffiths Valuation, 1850]. This shows the following Humphreys plots:

Around 1850, the Humphreys were evicted from their ancestral home of Doonane, for non-payment of rent.
The story was that the old landlord had died, leaving Doonane to his nephew. The nephew was killed in an accident (he fell from a horse). The land went to Phillips, the magistrate. The Humphreys could not locate the agent to pay the rent. In the meantime a family named Coffey located the agent, paid the rent due, and subsequently became the new tenants. Coffeys paid rent to Phillips.
Coffey may be related to these Coffeys.
The locals disapproved of the Coffeys' actions. It was said that from the day the Coffeys took over the Humphreys' holding, they were inflicted with bad luck.
The story was that it was Patrick Humphreys who was evicted, but this seems wrong.

David Humphreys left Doonane by Feb 1849.
Johanna Humphreys emigrated in 1850.
This indicates that the eviction was probably around 1849-1850, during the Famine.

At one point the landlord of Doonane was thought to possibly be Kingscote, the owner of Ciamaltha House (or Kimalta House or Kimaltha House), Garraunbeg townland, Killoscully par (N of Doonane).
Benjamin Bloomfield, 1st Baron Bloomfield, built Ciamaltha House shortly before 1840.
It was inherited by his descendants the Kingscote family. See KINGSCOTE in [Burkes LG, 1937, p.1297].

The Land Commission divided up Doonane, setting up a forest park on some of the land: "Doonane Woods".
On 23rd Sept 1958, Patrick Ryan of Gortnaskehy (no relation of John Ryan of Shower) is registered as full owner of the 42 acres around the old house [Folio 33536].

John Ryan of Shower (descendant of Patrick Humphreys) bought Doonane in Nov 1972.
He was registered as owner of Doonane 12th Mar 1973 [Folio 33536].
John Ryan demolished the old dwelling house in 1980.
As at 1990, gable end of dwelling house survived, as did ruined outbuildings and boundary wall.
Site may now be totally cleared.

The death of a William Humphreys of Doonane is recorded on 18 Mar 1800 in Newport RC par records.
From here.

Michael Humphrys at Doonane at bapt of his son John on 22 Apr 1815.

The death of Nicholas Humphrys, of Doonane, from "decay", is recorded in Newport RC par records, 28 Nov 1817.
From here.

The death of David Humphrys, of Doonane, from "inflammation", is recorded in Newport RC par records, 1 Dec 1820.
From here.

William Humphreys, farmer, of Doonane, in list of voters in 1840.
From Nenagh Guardian, January 4, 1840.
It has Doonane in townland of "Shanballyemun". It is the right Barony (Owney and Arra), but this townland name is not found today. Maybe Shanballyemun is an old name for Doonane townland.

Entries for Doonane on p.48 of [Griffiths Valuation, 1848].
From askaboutireland.ie.
Oddly, this shows four small houses. Whereas the map seems to show one big house.

Entries for Doonane on p.66 of [Griffiths Valuation, 1850].
From askaboutireland.ie.

The map linked to [Griffiths Valuation] at askaboutireland.ie does not match the plot numbers in the text.
The map only shows a single plot in Doonane - plot 1.
Try here.

The only house marked in Doonane townland in 1829 to 1842 map.
Not confirmed if this is the Humphrys house.

The same house. The only house marked in Doonane townland in 1887 to 1913 map.
Not confirmed if this is the Humphrys house.
Doonane was said to be long and low, maybe single storey.

Satellite view of the same site today.
Looks like site is cleared. Not confirmed if this is site of the Humphrys house.
Drag to move.
From Google Maps.
See street view. 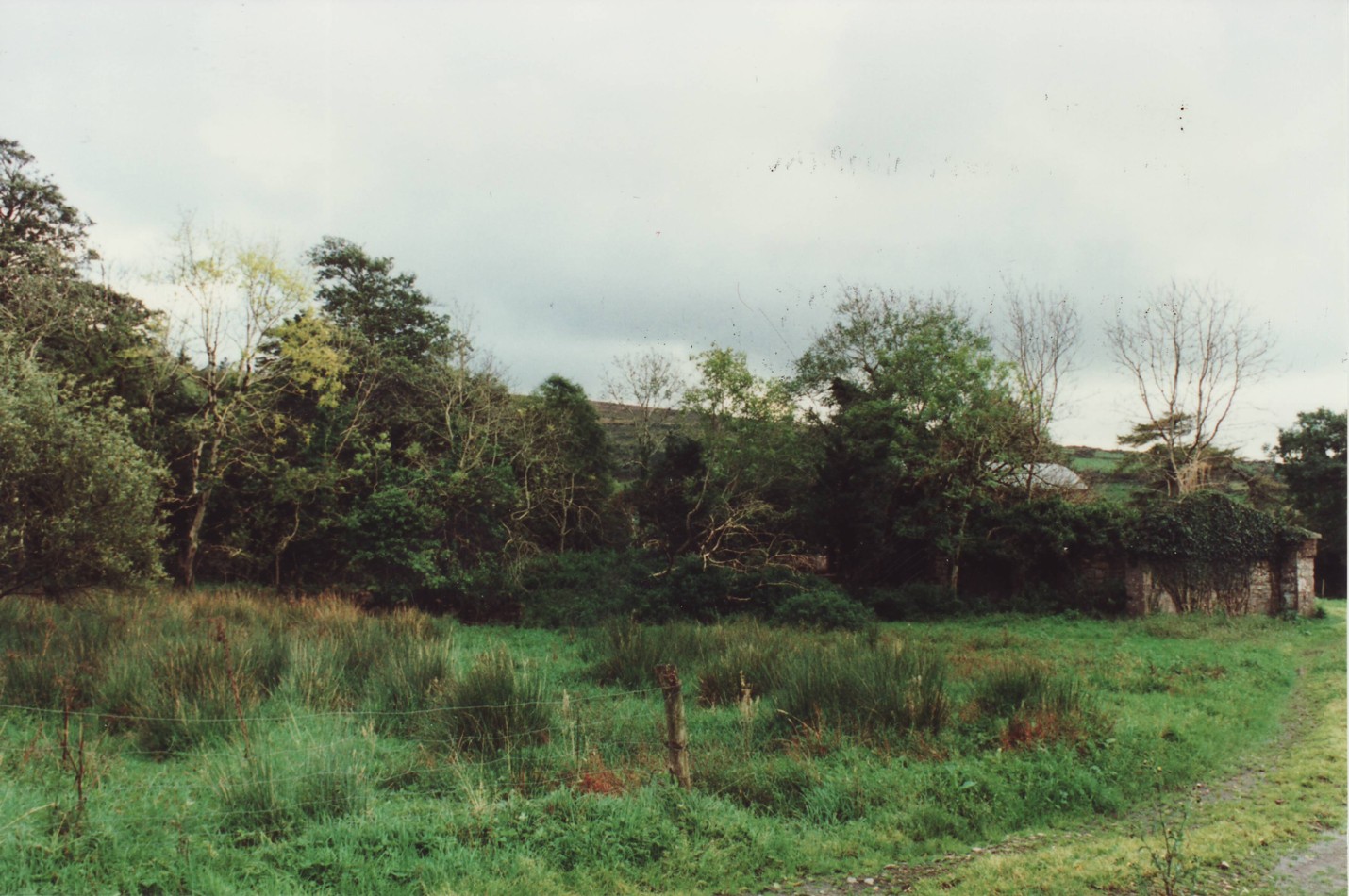 The entrance to the ruin of the old Humphrys house at Doonane.
Photo by Paddy Humphreys 1990.
See larger and full size. 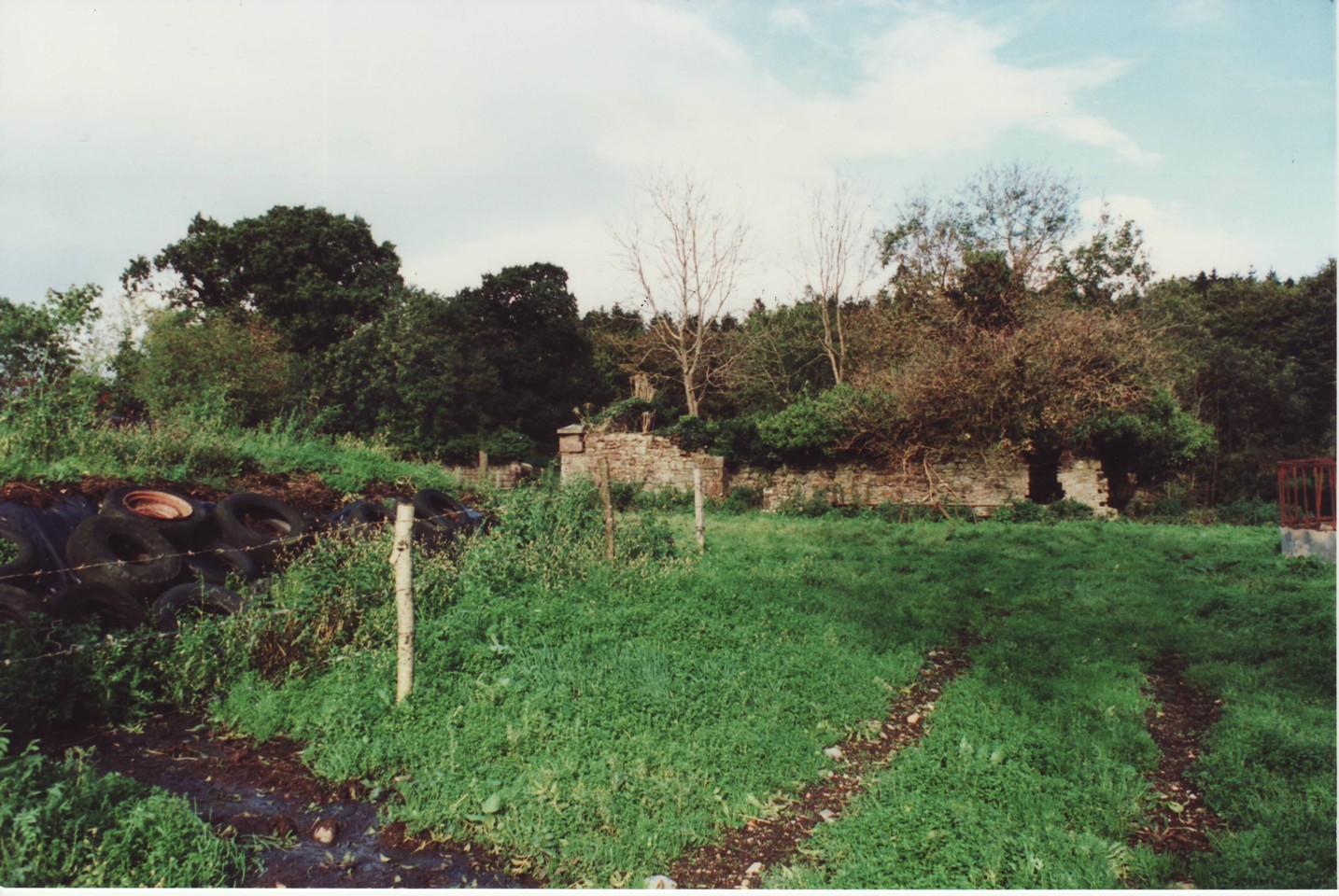 Doonane. The ruin of the old house.
Photo by Paddy Humphreys 1990.
See larger and full size.
See other scan. 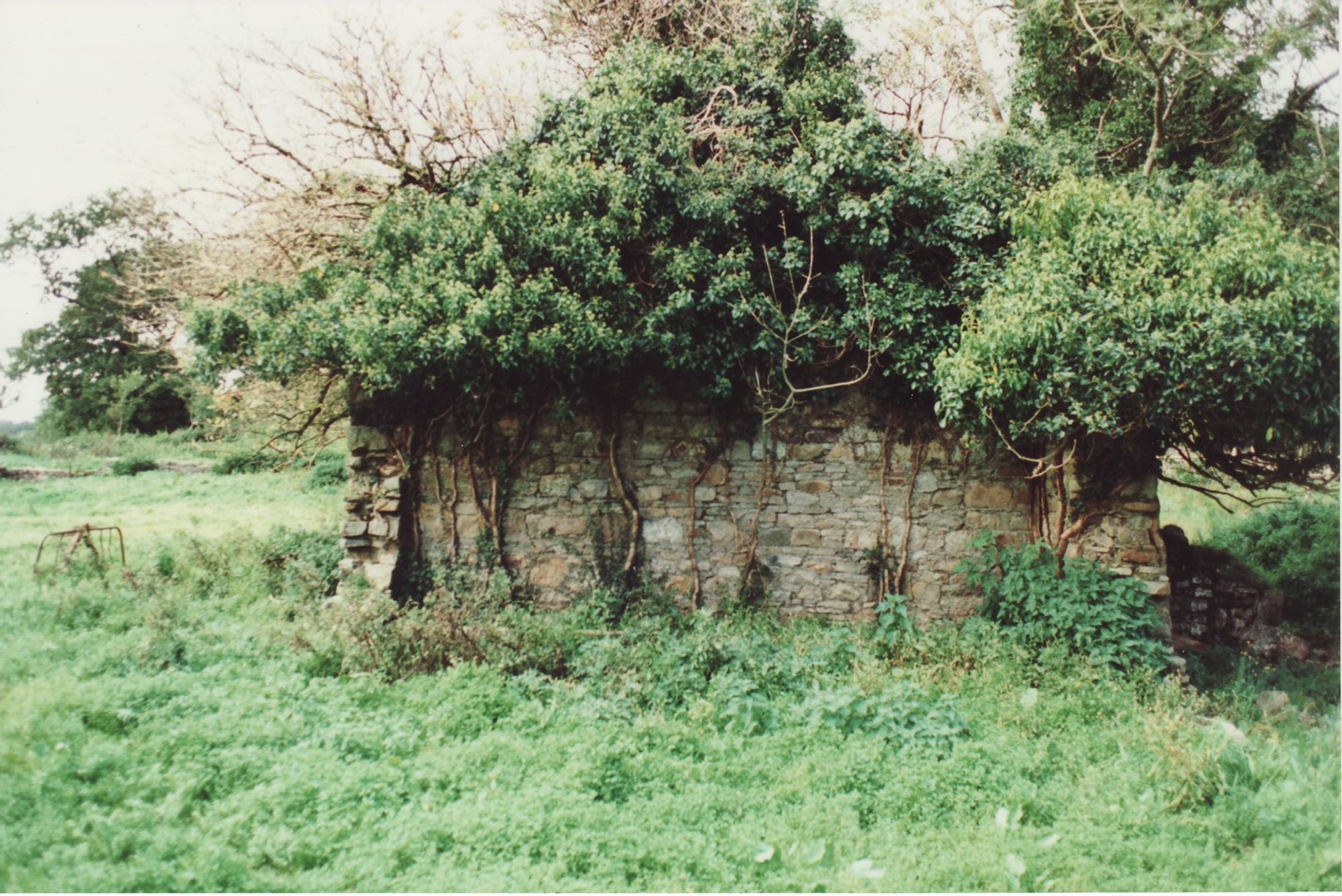 The ruin at Doonane.
Photo by Paddy Humphreys 1990.
See larger and full size.
See other shot. 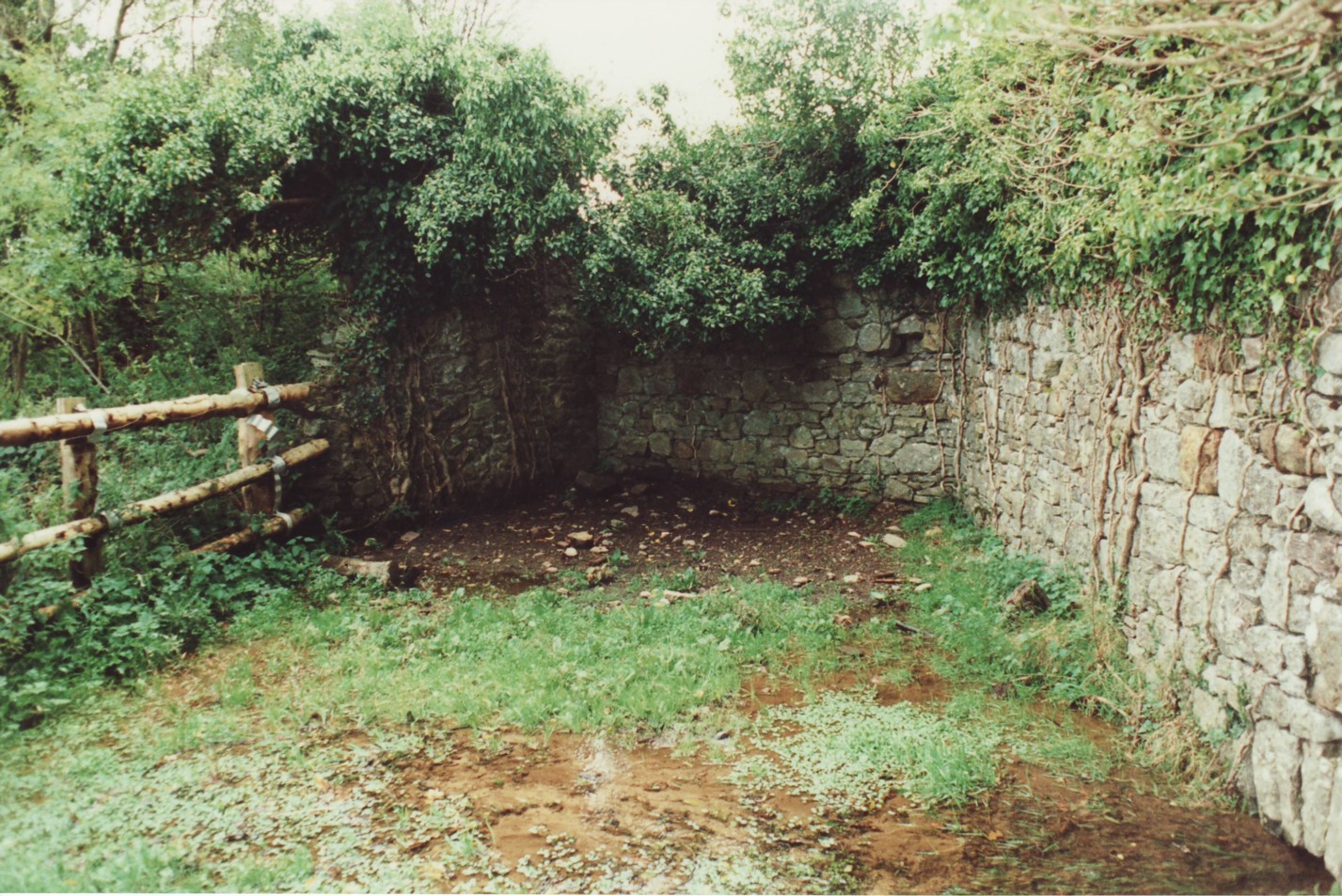 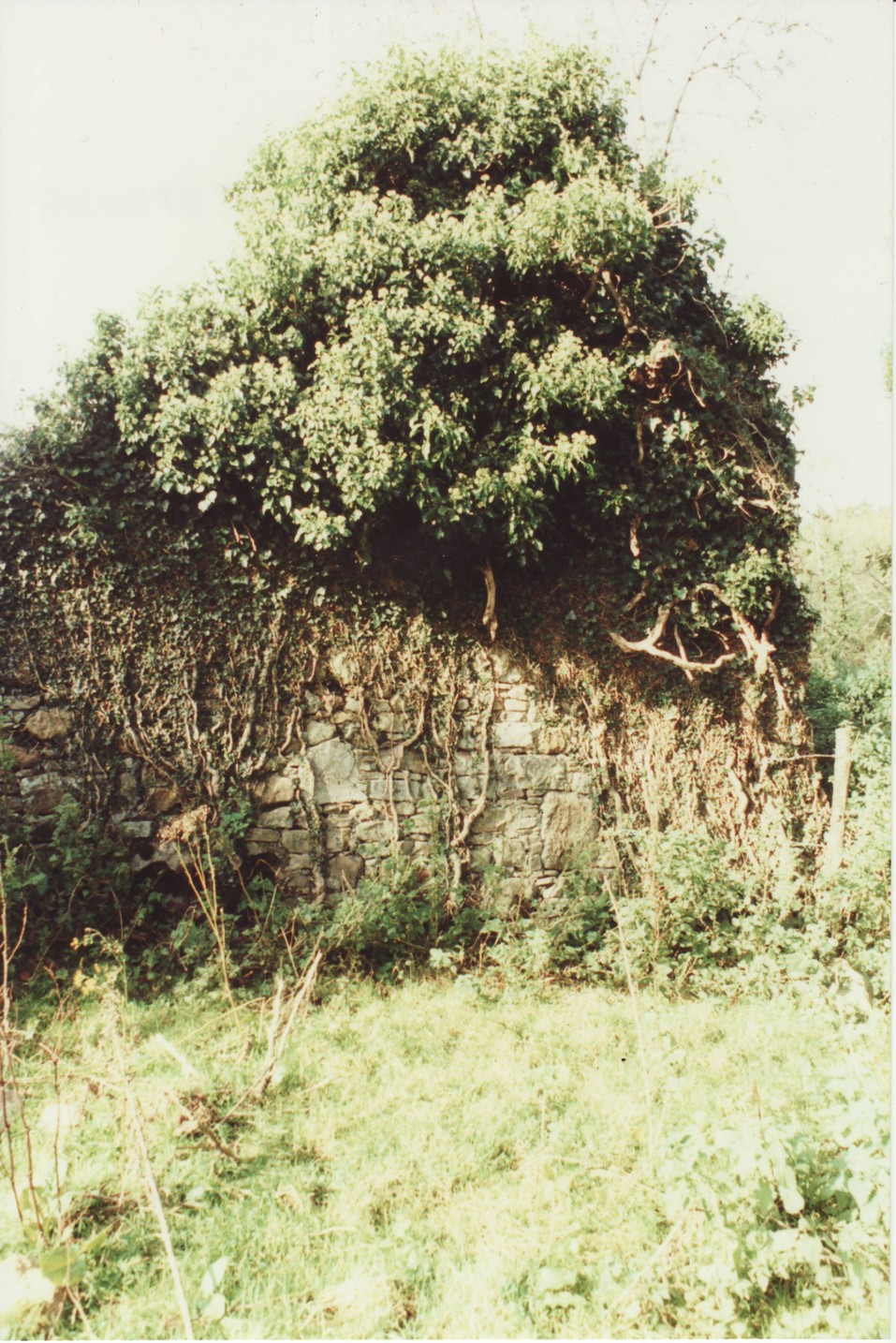 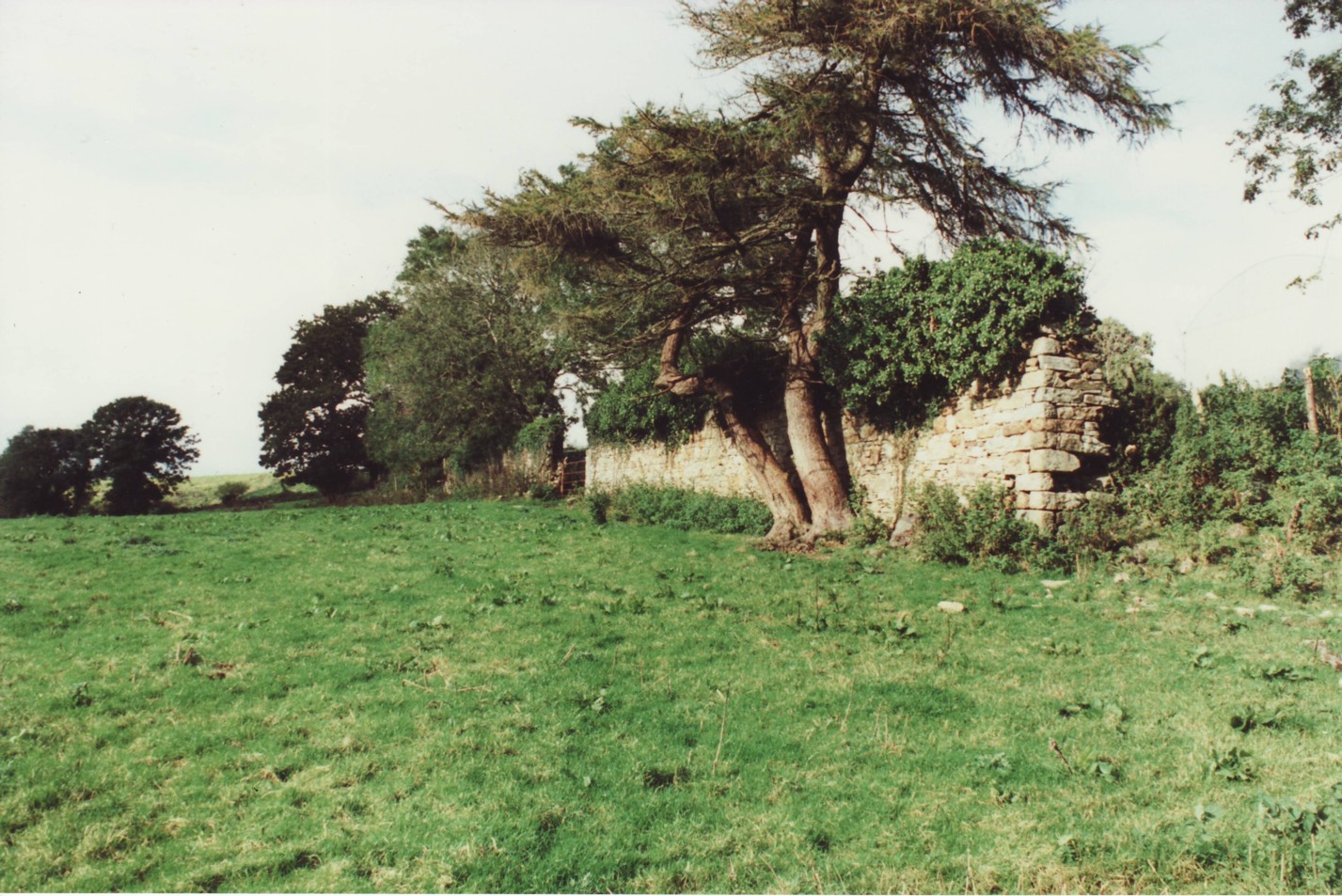