John MacNamara (ancestor of Lysaght and Rynne) acted as agent for Earl Nugent (died 1788), and was said to be a relation.
This is an early claim, made in 1830.
It seems possible, but the exact relationship is unknown.
If he is in any way a close relation, through Nugent, then he is a descendant of Edward I and of Aoife Mac Murrough and of Brian Boru, and so are Lysaght and Rynne.
John MacNamara,
born maybe c.1730.
He was agent for Robert Nugent (later Viscount Clare and Earl Nugent).
Letters survive of 1765 to 1769 from Robert Nugent in England to "John McNamara" in Galway. John is acting as his agent for his Irish estates.
Nugent was cr Viscount Clare in 1767, cr Earl Nugent in 1776, and died 1788.
John died before 1788.
Nugent left a pension to John's widow in his will of 1788.
John and unknown wife had issue:

John MacNamara was definitely the agent for Earl Nugent.

John MacNamara was said to be related to Earl Nugent

The claim that John MacNamara was related to Earl Nugent is an early claim, made in 1830.

[Letter of 1855] from Michael Lysaght says that the Nugent family regarded Hugh MacNamara as a relation in the 1780s.
Michael says he was told this by Hugh in 1830. 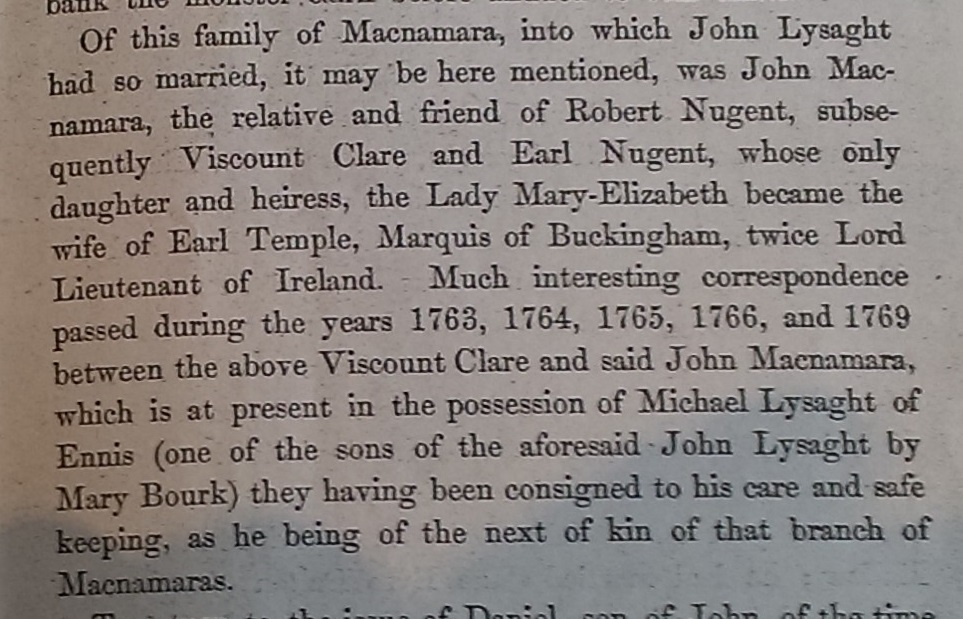 Extract from p.377 of [D'Alton, 1860].
This says that John MacNamara was "relative and friend" of Robert Nugent, 1st Earl Nugent.
See full size.

The Nugent relationship was thought to come through an ancestor "Joan Nugent".

This casts doubt on the idea that John MacNamara's wife was the Nugent:
The will of Robert Nugent, 1st Earl Nugent, in 1788 leaves a small pension of 5 pounds per year for life to the widow of John MacNamara.
It does not refer to her as his relation, in a section of the will mentioning various of his relatives.
The 1760s letters do not mention John's wife.

Aidan McMahon Glynn inserts "Joan Nugent" and "Mary Lynch" into the tree.
He thinks the connection to Nugent is through Edmond Nugent (or Edmund), brother of 1st Earl Nugent. 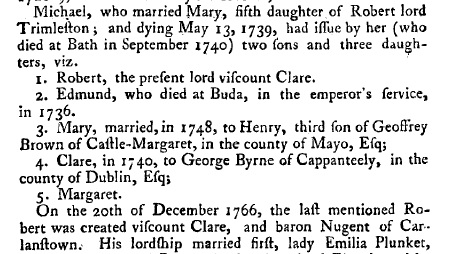 However, this idea does not fit with the peerages.
Above is an extract from Nugent, Viscount Clare, on p.127 of [Peerage of Ireland, 1768, vol.2]. Just after Nugent was created Viscount.
This says that his brother Edmund Nugent died at Buda, Hungary, in 1736. (Other peerages say at age 21.)
This is only 32 years earlier. It would be strange if this was false.

Aidan McMahon Glynn thought John MacNamara was of Doolin, Co.Clare.
The tree below shows that MacNamara of Doolin may descend from Edmond Nugent, grandfather of Earl Nugent. So that could explain the link.
But there are problems:

Question: Why does William Nugent MacNamara, MP (born 1775) have middle name Nugent? His supposed Nugent ancestor is too far back.

We start the family of MacNamara of Doolin as follows:

Tiege MacNamara,
of Ballynacraige (or Ballynacraggy), Newmarket-on-Fergus, Co.Clare.
This might be Ballynacragga, Kilnasoolagh par, Co.Clare.
He settled in Drumcreehy par, Co.Clare, in 1659.
[Mac Mahon, 2017] says he married Ann Nugent, "daughter of Edmund Nugent of Colmanstown, Co. Kildare".
Tiege and his wife had issue:


Bartholomew MacNamara,
born 1685,
of Muraghlin (or Murrough), Burren barony, Co.Clare.
Think this is Murrooghkilly or Murrooghtoohy, both in Gleninagh par, Co.Clare.
He mar Dorothy Brock.
He died in 1761.
They had issue:

Note 9 above leads to p.440 of The history and topography of the county of Clare, James Frost, 1893.
This shows entries from the Book of Forfeitures and Distributions listing the confiscations after 1652. See pp.390-526.
See facsimile of originals for Drumcreehy parish on pp.476-479 of Books of Survey and Distribution, Vol.IV, Clare.
This shows a way that MacNamara of Doolin could be related to Earl Nugent:

The Twigge Mss. Collection at the British Library is a vast archive of research into MacNamara of Co.Clare.
[BL] Add. Mss. Mss 39259-39270.
Research by Robert William Twigge, F.S.A. [died 1915].
Presented to the BL in 1916 by Mrs. Frances Susan Twigge, daughter of Francis Macnamara, of Ennistymon and Doolin, and widow of Robert William Twigge.
Includes transcripts and abstracts of many items that were burnt in 1922.
Donation Drive