Michael Rynne,
Dr. Michael Andrew Lysaght Rynne, Doctor of Law,
born 12 Sept 1899.
He is not listed with mother at Strand House in census 1911, must be at boarding school.
He was educ Clongowes Wood College 1912-1917.
He wrote on 18 Oct 1913 to his mother from Clongowes.
He was educ UCD, went up 1917.
He joined the IRA 1917.
He was an extra in Jim Sullivan's film Knocknagow (shot 1917, released 1918).
Over his life he published many writings in newspapers and magazines under the name "Andrew Lysaght". He wrote articles, letters, poems, stories, radio plays and marching songs. Collection in P133/4/2, starting on 22 Sept 1917 (him age 18).
See letter of 17 Oct 1918 addressed to him at Strand House. Forwarded to his aunt's house, 43 Pembroke Road, Dublin. He must have been staying with his aunt and uncle while at UCD.
On 5 Dec 1918, Fr. David Humphrys published a letter in the Irish Independent extremely hostile to Sinn Fein. Michael ("Micheal Ua Rinne"), from UCD, age 19, replied in a letter in the Irish Independent, 6 Dec 1918. He defends Sinn Fein and attacks the Irish Parliamentary Party.

He qualified as a barrister in Dublin, possibly 1926.
He went to the Continent to study law.
Doctor of Law (LL.D.), Doctor of International Law, University of Munich. His thesis was pub as book 1929. See cover.

Michael and Nathalie lived in 1930s (temp 1931-34) with his mother at Airfield, Stillorgan Rd, Donnybrook.
Michael worked for Irish Ministry for External Affairs 1932 to 1955. He was legal advisor to Minister for External Affairs.
They later lived St.John's, Kimmage Rd East, Terenure. There as at [Thom's, 1945]. There in 1949.

He retired from the civil service in 1961 and moved from Spain back to Ireland.
They settled in Sydenham House, Dundrum.
He is listed at Sydenham House in [Thom's] from 1965 to death.
He died 8 Feb 1981, St.Michaels Nursing Home, Dun Laoghaire, age 81 yrs [GROI].
He was bur Drumcliff Cemetery, Ennis, Co.Clare.

Michael Rynne writes on 18 Oct 1913 to his mother from Clongowes.
He draws a cartoon of John Redmond speaking at a rally.
His mother stands beside Mrs. Redmond holding a "Home Rule" sign.
See larger and full size. 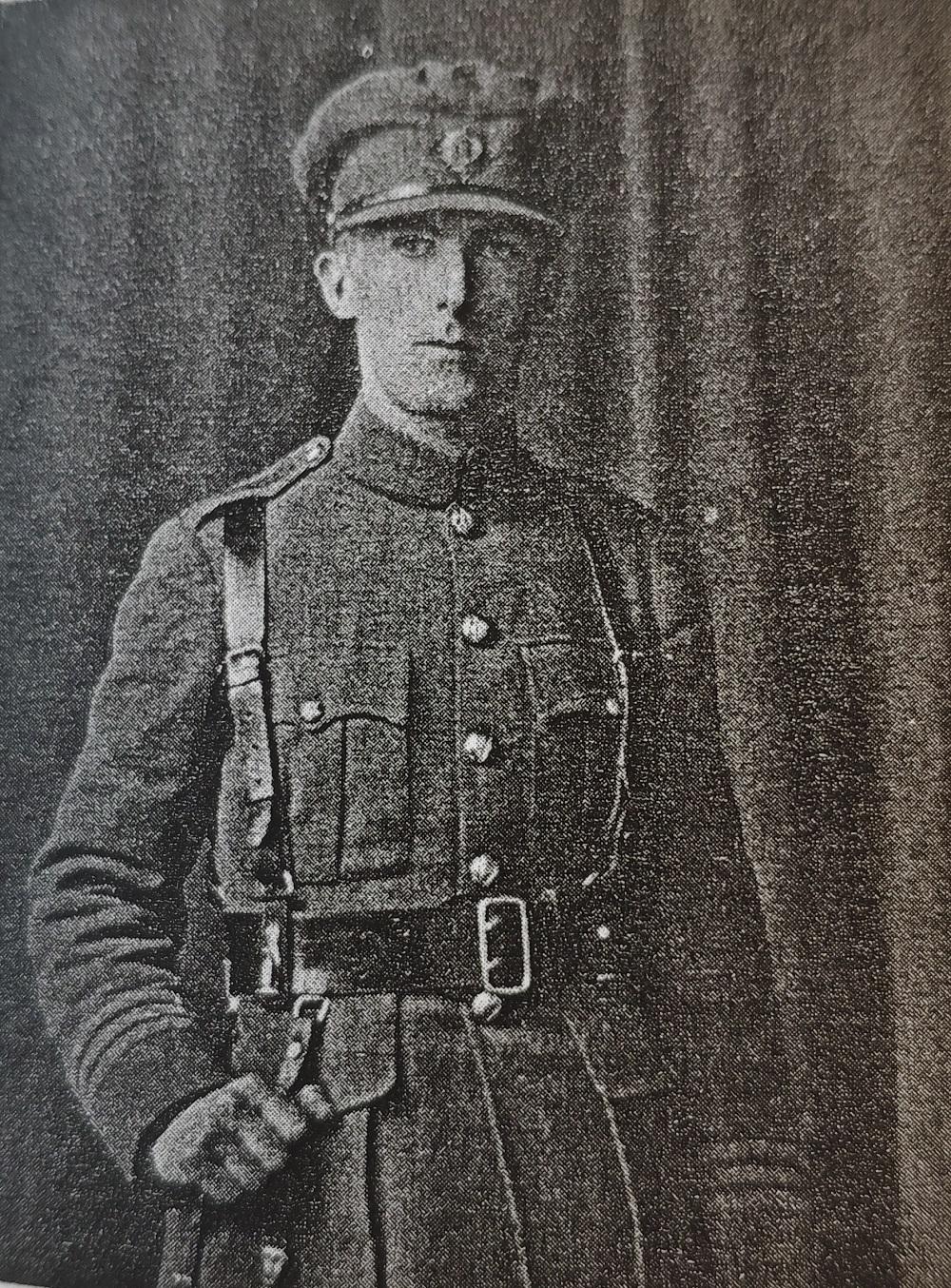 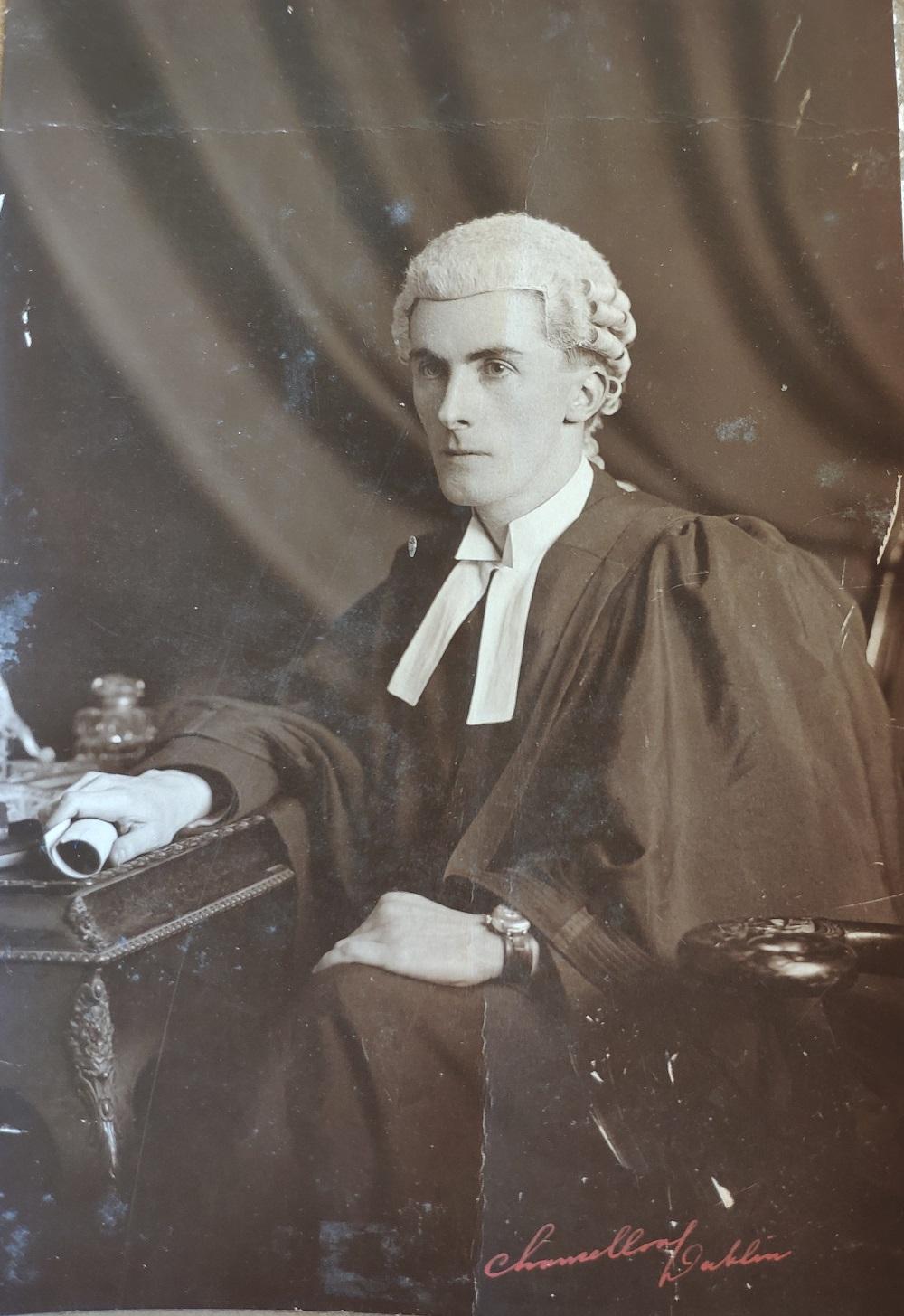 Michael Rynne qualifying as a barrister in Dublin, possibly 1926.
See larger and full size. See back. From P133/4/15.

Michael Rynne shaking hands with Franco, having presented his credentials as Irish Ambassador to Spain, 1955.
See larger and full size.
See also photo of him in Spanish ceremonial coach (and back). The date 1951 is wrong.