The High Kings of Ireland

Brian Boru, High King of Ireland (see here).
King of Munster 978-1014.
High King of Ireland 1002-1014. (Though some regional rulers did not accept his authority.)
He led the Irish of Munster to victory against the Irish of Leinster and the Norse Vikings of Dublin at the Battle of Clontarf, Co.Dublin, on 23 April 1014.
But he was famously killed himself by fleeing Norsemen, 23 April 1014.
He mar Eachraid and had issue:

He mar Gormlaith ingen Murchada (see here) and had issue: 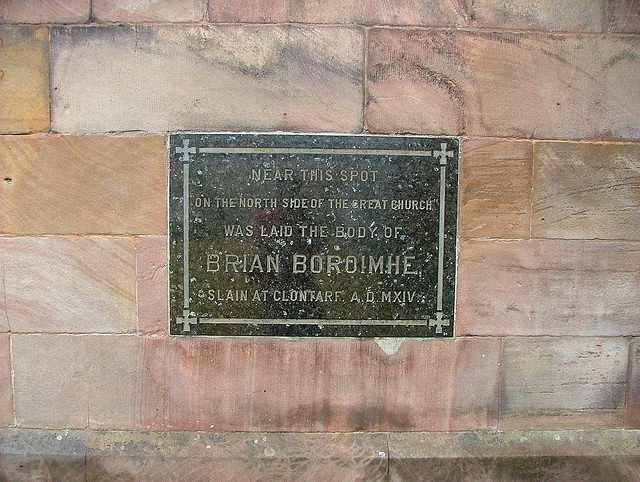 Tradition says Brian Boru was buried in 1014 at Armagh Cathedral (which has been re-built many times since).
Photo from here.

Elizabeth II (see thepeerage) descends from, among others:

Prince William descends from, among others:

English and British monarchs since Henry II.
Henry II invaded Ireland in 1169. It took just over 200 years for the English royal family to be descended from the Irish kings.
Every English and British monarch from Henry IV on (succ 1399) descends from Brian Boru.
Extract of "Coins of English monarchs" poster. See full size. You can order it here.
It incorrectly labels Richard I the Lionheart as "Richard II".

The Queen's visit to Ireland in May 2011 was such a success, and filled with such unexpected warmth, that I thought I would point out how Irish she in fact is.
The Irish Times published my letter on 21 May 2011.
See screenshot from here.
THE QUEEN'S IRISH ANCESTORS

In terms of Gaelic families, the Queen descends (remarkably) from the rebel Hugh O'Neill, Earl of Tyrone (died 1616) and also from Diarmaid O'Brien, 5th Baron of Inchiquin (died 1624). Through the latter she descends from Connor O'Brien, King of Thomond (died 1540) and Domnall Mor O'Brien, King of Thomond (died 1194). Ultimately, she descends from Aoife Mac Murrough (who married Strongbow in 1170) and from Brian Boru, High King of Ireland (died 1014).

In fact, Ireland is littered with her ancestral homes and her ancestors' tombs. Her most recent Irish-born ancestor was apparently Richard Wellesley, 1st Marquess Wellesley (died 1842). Given all this, it does seem unfair that she was never allowed visit her ancestral homeland until now.