Theophilus Yielding (see Wikitree),
or Yeilding.
He is party to [Deed of 1761] with his father.
He was admitted to [King's Inns] as an Attorney in 1762. See entry.

He had relationship with Mary ---- (illegible, looks like "Galihue").
Their son was bapt Catholic in 1772. Mary must be Catholic.
It is unclear but looks like baptism says illegitimate.
Looks like he had a natural child that Mary raised Catholic, and later Theophilus married normally to a Protestant and had other children.
Would explain why son seems to be Catholic and daus seem to be Protestant.
Theophilus and Mary had issue:

"Caher Anne", W side of Tralee.
From 1829 to 1842 map.
Caherina House would be the large building at the junction of the two roads. This is where the new Caherina House is.
The location is now junction of Caher Anne Rd and Spa Rd.

There is an early 20th century Caherina House at the junction today.
See street view.
Map from here. 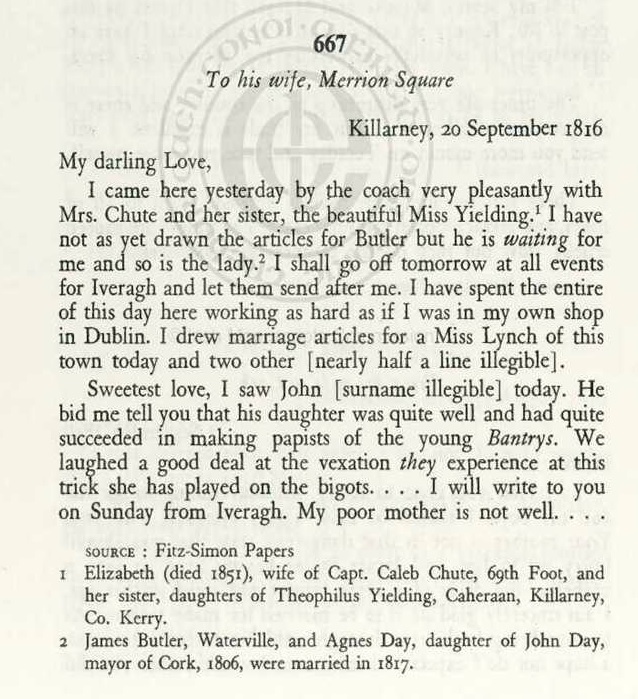 Letter of 20 Sept 1816 from Daniel O'Connell to his wife.
Mentions Elizabeth Yielding (Mrs. Chute) and one of her sisters. (Note her sisters would be age 39 and 37.)
"Butler" is James Butler of Waterville, 2nd cousin of the Yielding sisters.
From p.118 (letter 667) of [Correspondence of Daniel O'Connell, vol 2].

The burial of Catherine Yielding and her sister Letitia Yielding, 1844, Ballymacelligott CoI church.