William Miller,
William T. Miller.
Policeman in the County Constabulary (which much later became the RIC).
No service record found for him in police service records (only includes those who were serving in 1836 and later).
He is listed in [RIC officers].

Chief Constable of Listowel, Co.Kerry, 1827-29:
He was appointed 1827 as Chief Constable of Listowel, Co.Kerry. Apparently appointed Apr 1827 [CSORP, 1827].
He wrote from Listowel on 30 Mar 1828 [CSORP, 1828, no.410] to William Gregory, Under-Secretary for Ireland, Dublin Castle. He is worried about a report "that a reduction will take place in the police establishment". He says that if he loses his position his life will be at risk.

He mar 28 June 1828, Kilflynn, Co.Kerry, to Mary Ponsonby [bapt 20 February 1804, descendant of Henry VII].
Marriage settlement is about her Ponsonby inheritance. It covers a sum of £1,880, the remainder of her inheritance of £2,000, her share of the £4,000, the remainder of the original £6,000 inheritance on Ponsonby lands in Co.Kerry.
Marriage settlement witnessed by William Ponsonby, junior, of Crotto and John Herbert, carpenter, of Crotto.
They are living Listowel as at [Deed, Apr 1829, Crosbie].
[Patrick Carroll's Notebooks] list him as Chief Constable of Listowel in 1829, living Listowel.

William Miller is party to [Deed, 1842] about his wife's Ponsonby inheritance. His wife is not listed as one of the parties. She might be dead.
Not known if any issue.
In letters of 1830-31 above he said he had to take money in order not "to see my family starve" and of "not having the means of supporting myself or wretched family", but it is unclear who his "family" refers to.

This must be William Miller's father:

James Miller,
born 1773 or 1774,
listed in [Letter, Nov 1829] as age between 55 and 56,
policeman,
[RIC officers] says he was first in Dublin Police, then joined Peace Preservation Force 1816,
[Letter, 1829] says he had 12 years of service as Chief Constable in the Barony of Clanwilliam, SW Co.Tipperary (the area of Kilfeakle, where William Miller was a policeman),
[Patrick Carroll's Notebooks] say he was Chief Constable of the Barony of Clanwilliam as at 1822, he was then living Tipperary town (the main town of Clanwilliam barony),
described in [Letter, 1829] as "Late Chief Constable", pensioned after 1826,
[Letter, 1829] is a letter dated 14 Nov 1829 from him, from Kilfinane, Co.Limerick (must be living with his son William), to the Chief Secretary, Lord Francis Leveson-Gower, saying he wants his pension converted to a lump sum payment because of certain difficulties he has (perhaps bailing out his son),
the request was apparently refused.

Christy's pub ("The Well"), E corner of The Square, Listowel. From Google street view.
[Griffiths Valuation, 1852] lists the "Police-barrack" at property no.31, The Square, Listowel.
Local historian Vincent Carmody says this is now Christy's pub.
He says "The Well" was short for the Bridewell (the local prison).
This may have been Miller's station.

The "Bridewell" (the prison), Church St, Listowel.
From 1829 to 1842 map.
This is the site of the modern police station.
[Gaughan, 1974] says that as at 1845 the modern police station site was the Bridewell.
A bridewell sometimes had a police station attached, but that does not seem to be the case here.
[Griffiths Valuation, 1852] lists the Bridewell at property no.70, Church St, Listowel, but has a separate listing for the police barracks in The Square.
Church St used to be called Church Lane in the 19th century.

The constabulary barracks, Church St, Listowel (at Bridewell Lane, later called Forge Lane, now Colbert St).
From 1887 to 1913 map.
The magnificent new Listowel RIC station (which stands today) was built maybe around the 1880s at the site of the old Bridewell.
See Listowel police station in 1901 census.
In 1918, Church St was renamed Ashe St but the new name did not catch on.
Listowel police station was in 1920 the site of the Listowel Mutiny. 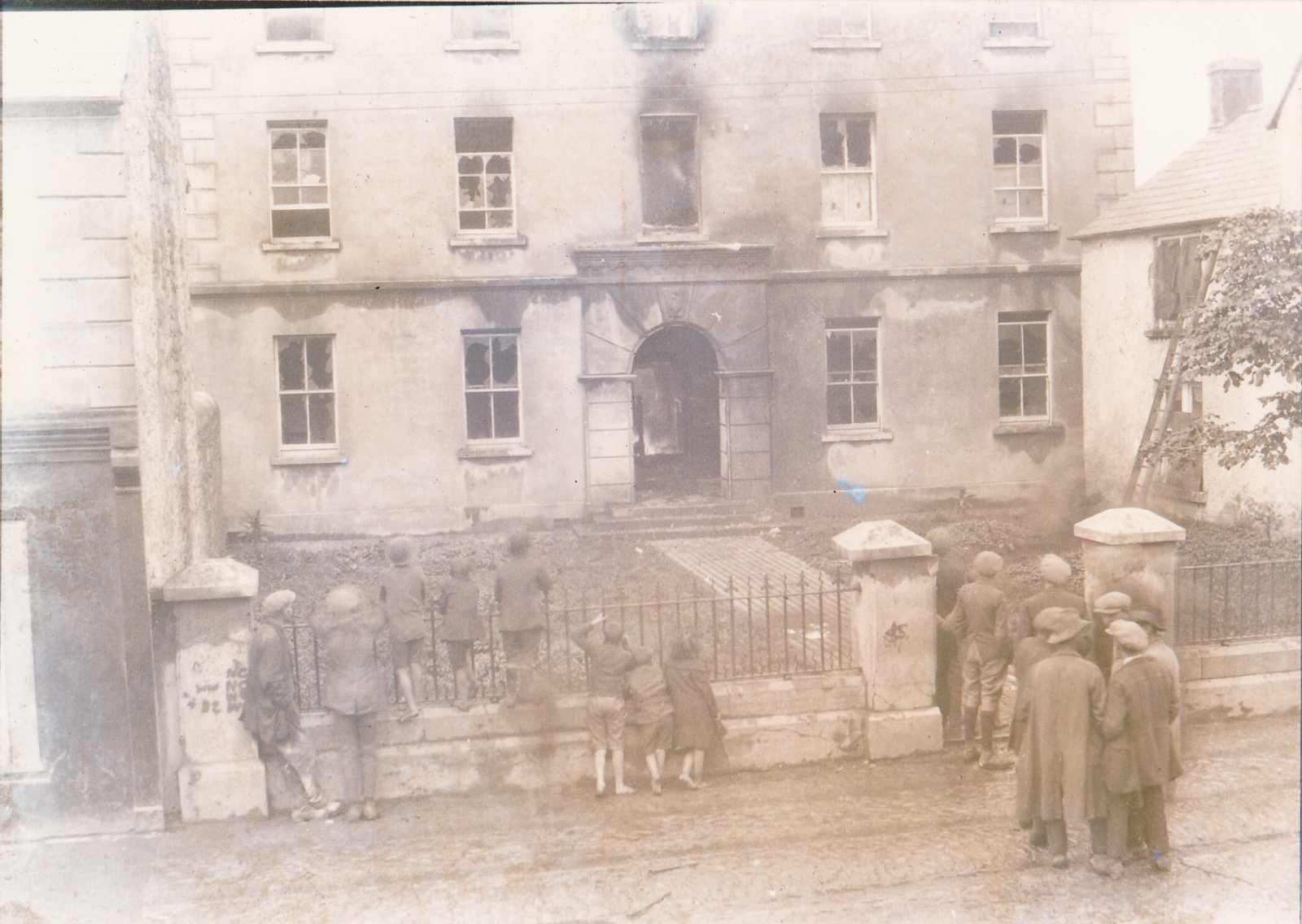