Major (William) Ponsonby of Crotto.
Sold at auction by Phillips, London, 7 Nov 2001.
See bigger.
(todo) See entry at artprice.com.
Military history expert Peter Walton says about this picture: "The uniform is probably nearer to 1810 but could be right for the Kerry Militia whose uniform was scarlet with yellow collar and silver lace (including the epulettes)."

He mar 1stly, Jan-May 1794, to Elizabeth Gun [born post-1765, descendant of Edward III].
Elizabeth was widow of James Fuller Harnett. Her children by him came to live at Crotto.
William's father died 1796. He inherited Crotto.
He must be "William Ponsonby" who was High Sheriff of Co. Kerry (like his father) in 1797-98.

Arthur Wellesley (later Duke of Wellington), Chief Secretary for Ireland, wrote to him in Dec 1807, authorising Ponsonby to reward informers.
Wellesley wrote to him in Jan 1808 about the possibility of a position for Ponsonby.
In Aug 1808 he was appointed to the office of "Collector of Excise duties in Kerry". See item in Freeman's Journal, 23 August 1808.
He is listed as "Major" at 1809 reception.
His step-dau Sara Harnett married against his wishes c.1809.
His brother Richard died 1811, and then Richard's children seem to have come to live with him at Crotto rather than with their mother, who remarried.
Elizabeth dies, 1812:
She died Cork, Fri 19 June 1812, age less than 47.
See death notice in Freemans Journal, Tuesday, June 30, 1812.
William had issue by 1st wife:

William is listed at Crotto in [Pigot's directory, 1824].

at Crotto in [Tithe Survey] 1825, lands of 142 acres.
His nieces Louisa and Mary Ponsonby were living with him at Crotto as at 1825, when Louisa became pregnant outside marriage. She left to go to her mother some time after this.
His niece Mary Ponsonby was still living with him at Crotto in 1828.
William was living Crotto as at [Deeds, 1829], at which time Louisa has left Crotto and is now with her mother.
William Ponsonby, senior, JP, of Crotto, and William junior are listed in a petition in Chutes Western Herald, 17 February, 1831 and 21 February, 1831.
Two of his sons, George and William junior, died in June-Aug 1831. William died a few months later.
"William Carrigue Ponsonby" is listed in House of Commons Parliamentary papers, Volume 35, 1832, as one of the Magistrates in the Commission of the Peace in Co.Kerry.

His son Thomas Carrique Ponsonby inherited Crotto.
Honoria is party to [Deed, 1842], in which Thomas is selling off Crotto and the Ponsonby estate.
She is listed in 1842 as of Tralee (has left Crotto).
[Slater's directory, 1846]

lists her at 7 Day Place, Tralee.
She was next door to Rowland Blennerhassett of 6 Day Place. (In 1849 her dau married his son.)

Meant to be Elizabeth Gun ("mother of Mrs. Guion - Mrs Harnett") except seems far too old for her.
She was born born post-1765 and died 1812, age less than 47.
Courtesy of Sylvia Goiran and Adair Hobson.

William Ponsonby, High Sheriff of Co. Kerry, and others offer a reward for the conviction of the murderer of a soldier at Tralee on 21 Dec 1797. Also offering rewards are John Blennerhassett, Clerk, and George Cashel and John Blennerhassett and George Cashel junior.
From Chute's Western Herald, 22 Dec 1797.
Printed on p.100 of Historical Record of the 2nd (now 80th) or Royal Tyrone Fusilier Regiment of Militia (1872).

William Ponsonby listed as Captain of the Clanmaurice Corps of infantry in Co.Kerry.
From p.92 of List of the Volunteer and Yeomanry Corps of the United Kingdom, 1804. 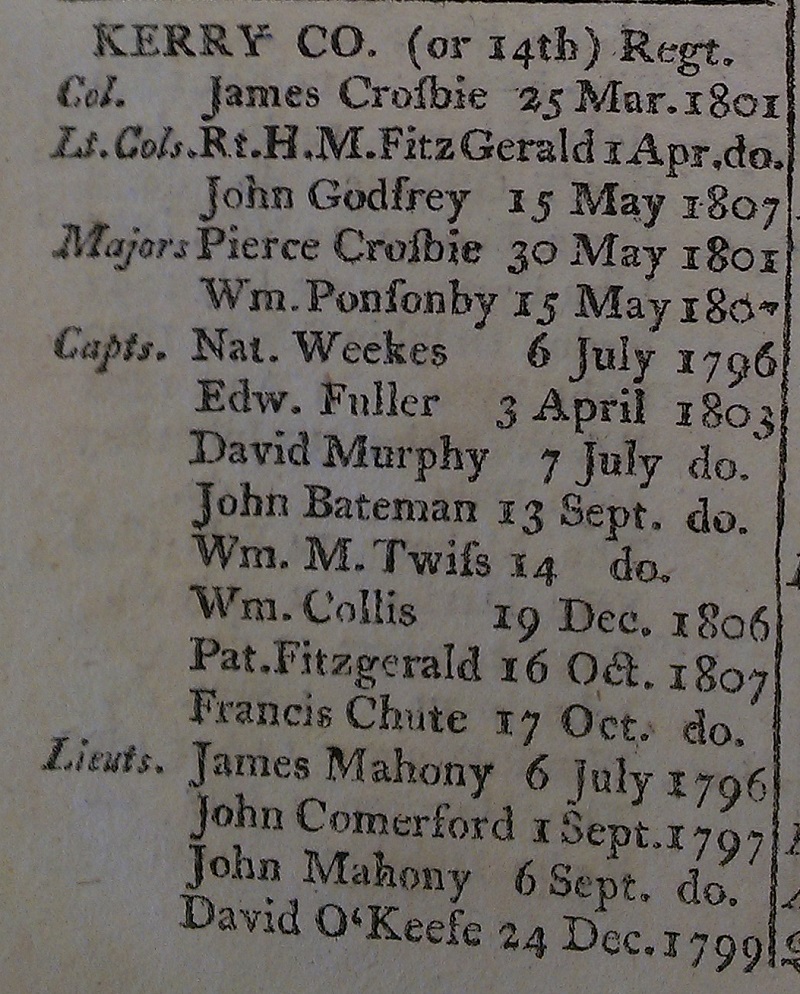 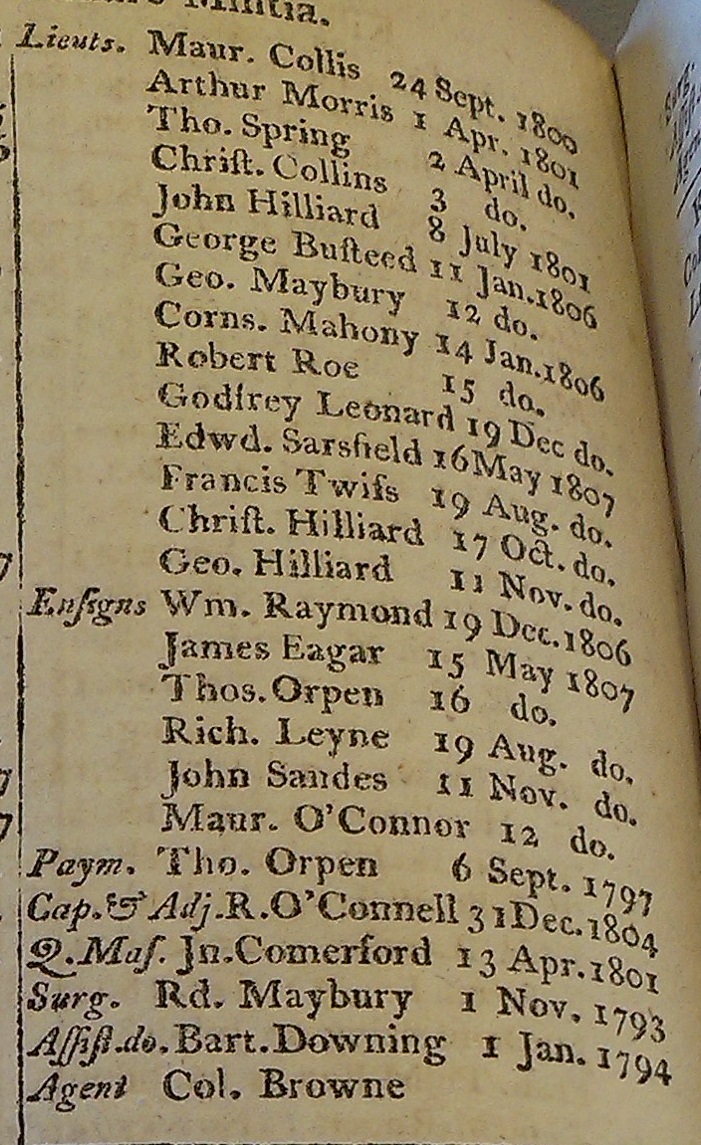 CROTTO in [Leet's Directory, 1814] gets the alignment of the 4th column wrong.

Map of Ponsonby and Lindsay graves inside Aghavallen church.
From [Letter, 1898].
The above Ponsonby tomb is "a".

Lament for William Ponsonby and his sons.
Tralee Mercury, 4 January, 1832.