Tarbert Island is on the Shannon estuary just to the N of the town of Tarbert, Kilnaughtin par, N Co.Kerry. See map.
Tarbert House is on the road to Tarbert Island.

Tarbert was an important strategic location in the late 18th to early 19th centuries for both defence (protecting the Shannon against foreign naval invasion) and revenue and customs.
In the late 18th to early 19th centuries there was a regular threat of French invasion.
The French attempted to invade Ireland in 1796. They landed forces in 1798. French plans to invade Britain and Ireland intensified under Napoleon in 1803-05. The Shannon was high on the list for possible invasion places in French planning.
Many British and Irish defences against invasion were built.
The military battery at Tarbert Island was built 1790s, replacing earlier works. Land and naval forces from different parts of Ireland were stationed there.

Richard Ponsonby died 1811. [Joseph Lindsay, 1897] says that a house came with his job, and when he died his widow Letitia Blennerhassett had to leave. She "was obliged to give up the government house and went to Limerick to live".
Letitia Blennerhassett married 2ndly in 1811 to William Lindsay.

A view of Tarbert, Co. Kerry, from the Co.Clare bank of the River Shannon.
Tarbert House is visible centre-left on the Co.Kerry bank. Tarbert Island is centre-right on the Co.Kerry bank.
Painted c.1782 by Francis Wheatley.
[Pielou, 1935] says it refers to an incident in 1781.
From the Glin Castle collection. Sold by Christie's 2009.

Shipping off Tarbert, Co. Kerry.
Tarbert town to LHS, Tarbert House in centre, Tarbert Island to RHS.
Painted 1795 by Joseph Charles Barrow.
From the Glin Castle collection. Sold by Christie's 2009.
Richard Ponsonby and his wife Letitia lived on Tarbert Island on the RHS.

Detail of above showing Tarbert Island.
Richard Ponsonby and Letitia probably lived in one of these buildings.
See larger.

Detail of above showing Tarbert Island (where Richard Ponsonby and his wife Letitia lived).
See larger.

This map, identical to above, says "Surveyed in 1897" and printed 1898.
See larger and full size.
See close-up and close-up. 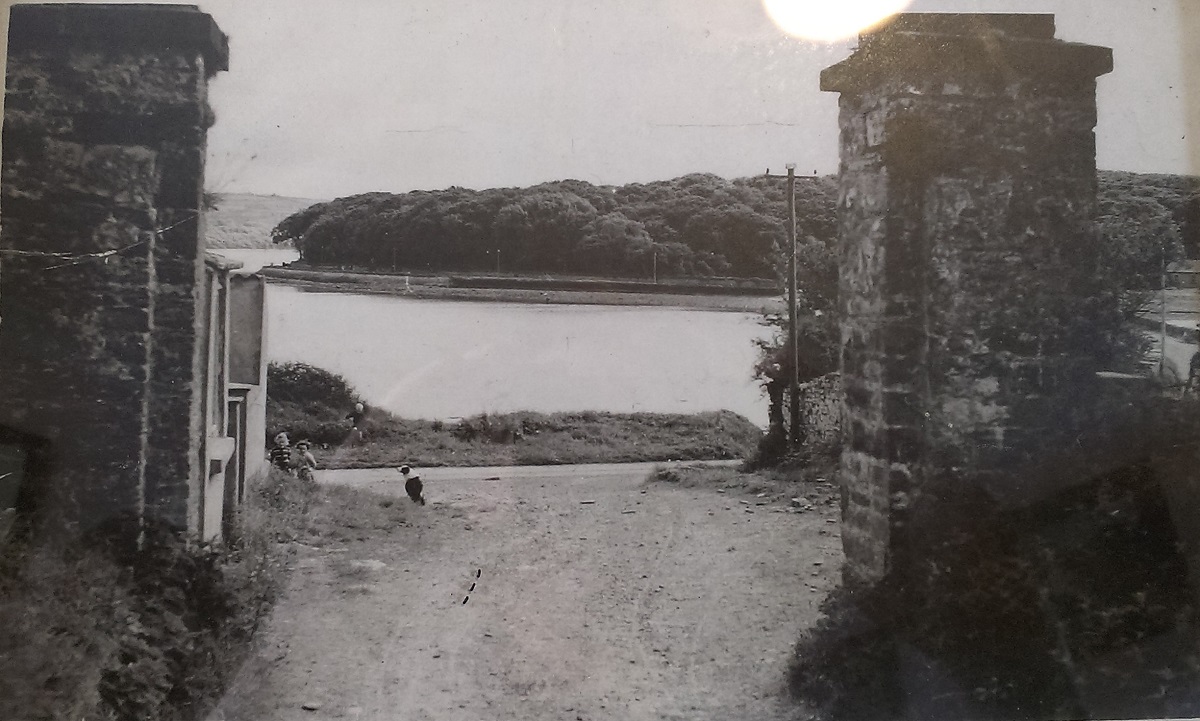 The old gates into the coastguard station. Looking out. At the bend in the road.
Old gates now gone. See modern street view (then turn around).
See larger and full size.

The pier on Tarbert Island.
Photo 2006 from Geograph. Creative Commons.