Baron Adolf de Roeder,
or Adolph [letter of 1852],
"Baron Adolphe F.F. Roeder" (according to mar notice),
of Diersburg, SE of Hohberg, some distance N of Freiburg, Baden, Germany (see map),
of the old noble family of Roeder of Diersburg.
At marriage he is listed as of Diersburg, an officer in Austrian service.

He mar 1stly, 19 Dec 1846, to Georgina Gibbon [born 10 Aug 1823, descendant of Edward III].
They mar at the British Embassy, Frankfurt. See marriage notice in The Times, 1 Jan 1847.
They lived Innsbruck, Austria.
A letter survives from Adolf to his mother-in-law Elizabeth Gibbon, written from Innsbruck, 10 Apr 1849, detailing the bravery of William Henry Gibbon in battle in Mar 1849.

Georgina dies, 1850:
Georgina died 5 Dec 1850 at "Wiltau" [according to grave], Innsbruck, Austria, age 27 yrs.
Wiltau is now called Wilten and is an area of Innsbruck (see map).
She was bur 8 Dec 1850 in the military cemetery near Wilten, Innsbruck. Large burial monument.
Name recorded on grave at Nigg Bay, Aberdeen, but she is not bur there.

Adolf mar 2ndly, 8 Nov 1851, to ----.
In letter of 13 Nov 1851, Georgina's father expresses their surprise: "Roeder has married on the 8th!" Adolf said: "he was sure poor Georgy would bless him in heaven for having provided .. a second mother for her dear Boys". In an enclosed note, Georgina's mother complains it is very insensitive of him to marry so soon. She is upset that he married on the 8th of the month, when Georgina was buried on the 8th of the month.
In letter of 28 Nov 1851, Georgina's mother says: "I answered de Roeder's letter very sharply, and told him plainly what we thought of his marrying eleven months after he had followed our dearest Georgina to her grave."
[Letter of 1852] from Georgina's sister Margaret says the Gibbons were not informed about the new marriage but found out indirectly. Margaret says she is told that: "Adolph .. speaks continually of "his poor Georgy whom he says he never can forget", all in the presence of the new wife, who sits and listens to this with the greatest composure".
Baron Adolf had issue by 1st wife Georgina:

Arms of Roeder of Diersburg.
See full size. From here.

Arms of Roeder of Diersburg.
See full size. From here.

Georgina Gibbon (Baroness de Roeder) was bur in 1850 in the "Militärfriedhof" (military cemetery) near Wilten (Wiltau), Innsbruck, Austria.
Does the grave survive?

19th century map of "Wiltau" (Wilten) showing location of "Militar Begrabniss" ("Military Funerals").
This must be the "Militärfriedhof" (military cemetery) where Georgina is buried.
This is between Wilten and Pradl.
This is now called the K.u.k. Militärfriedhof Pradl (Pradl military cemetery for the Austro-Hungarian Army).
See full size. From here. 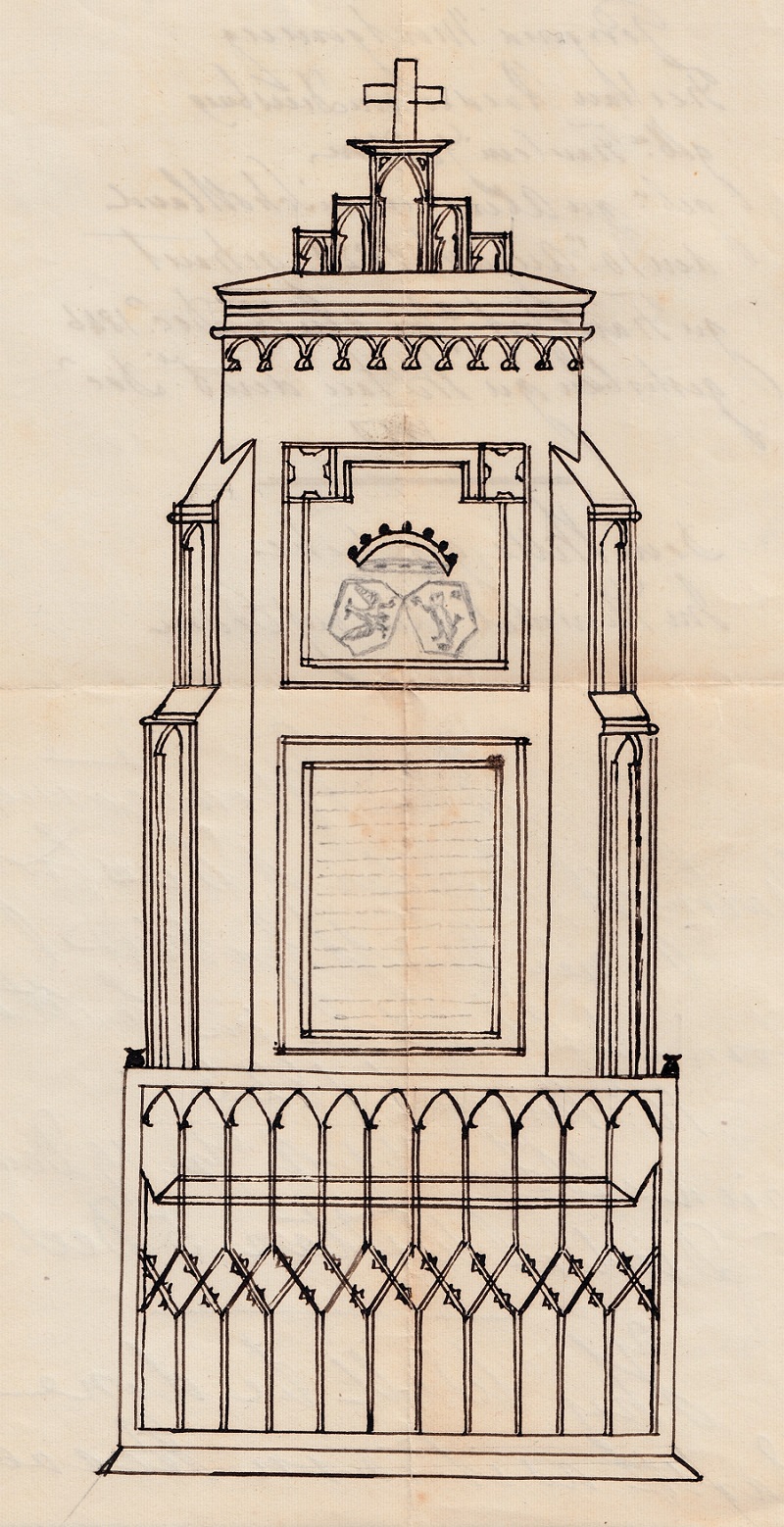 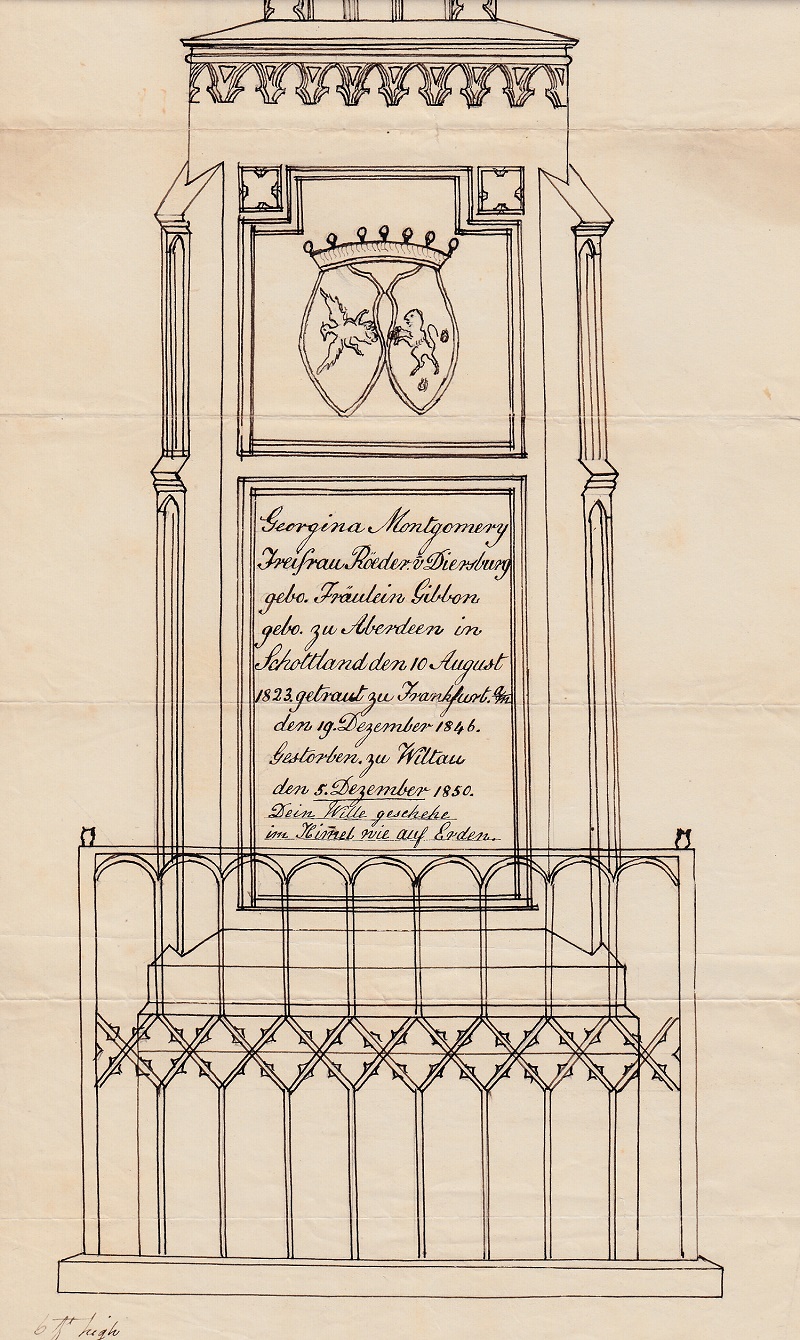 The cup with the de Roeder arms.
See full size. 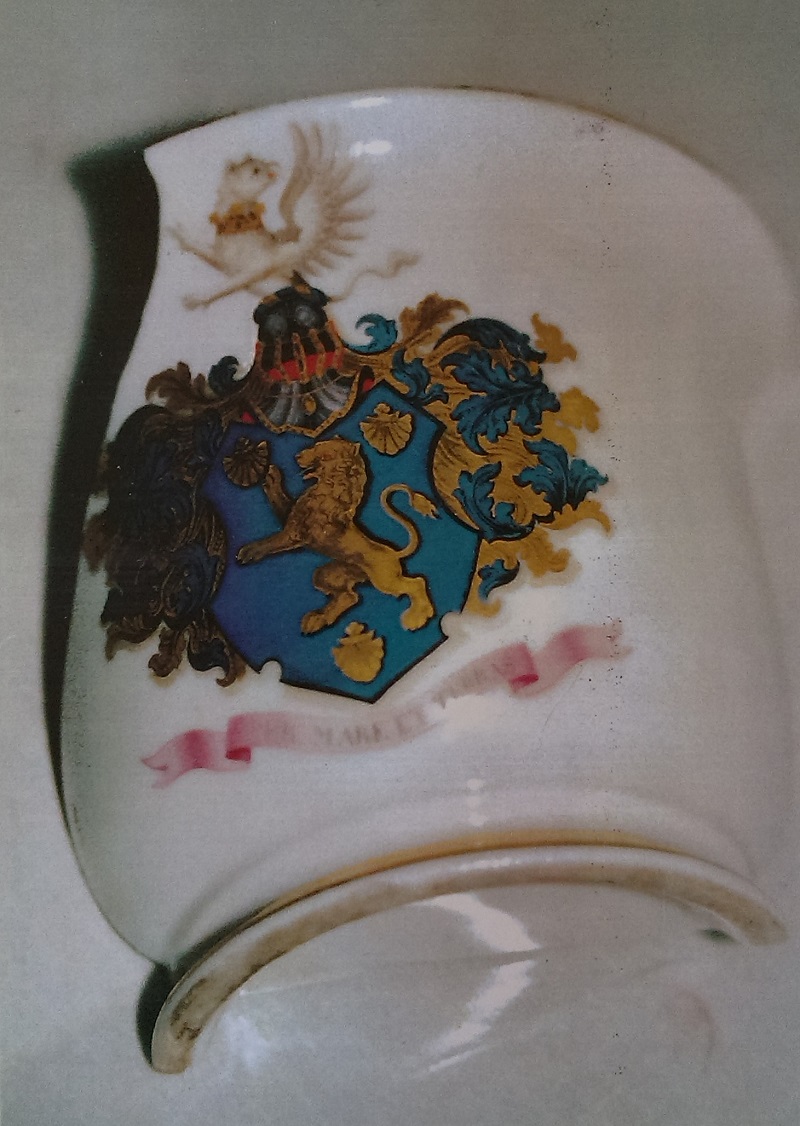 The cup with the Gibbon arms.
See larger and full size.