Baron Charles de Stentzsch,
or Baron Charles von Stenksch-Prittag,
born perhaps c.1815.
He was in the Austrian army.
Joined his regiment in 1835 [see letter of 1852].

He mar 20 July 1850, Cathedral Church, Munich, Germany, to Margaret Gibbon [born 30 Apr 1818].
In letter of 28 Nov 1851, Margaret's mother Elizabeth is with her, as the birth of her first child draws near. Elizabeth says: "I wish to God it was all well over, and am sometimes sorry that Charles will not be here, but when I think of what a noisy man he is, perhaps it is better he comes when all is over."
In letter of 22 Mar 1852, Margaret says Charles was promoted to "1st Captain". Says he is leaving his old Regiment after serving in it for 17 years. She tells her brother that she is recovering from the birth of her child, and she is "so much occupied with my little darling".
They moved around with the Army.
At daughters' deaths in March and Oct 1853 they are in Transylvania [then part of the Austrian Empire, now in Romania].
Both of their children died in 1853. At the end of the year they had no children.
The Crimean War started Oct 1853, Austria neutral at this point, later sided with Britain.
At dau's birth Nov 1855 they are in Bochnia, in Galicia [then in the Austrian Empire, now in SE Poland].
At dau's birth Feb 1857 they are still in Bochnia.
Letter of 21 Apr [think 1857] says: "You will be glad to hear that Margaret is now with Charles at Altona, her life there will be."

The expenses book of Arthur Augustus Gibbon lists presents to "Margaret de Stentzsch" at various dates up to 1893.
Margaret lived at Lannach Castle, near Graz, Austria.
She lived to see great-grandchildren.
There is a letter written by her from Lannach Castle to her then-unmarried niece Ruby Gibbon (later Hilligan), 13 Jan 1910. 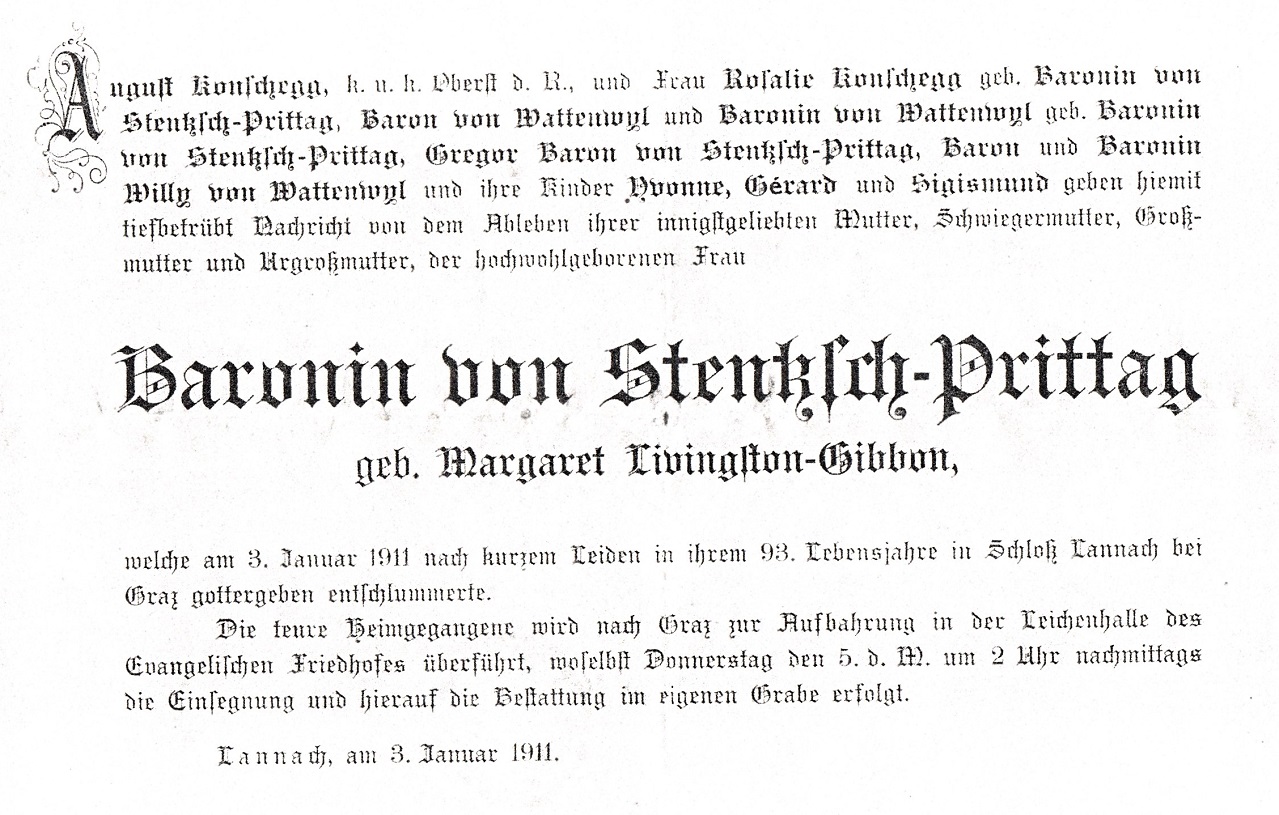 Translation into English.
See other translation.

Possibly the same person as: