William Henry Gibbon, would be sometime 1848-1857.
Probably in uniform of Austrian Empire.
Though possibly uniform of British German Legion.
Image courtesy of Mike Hilligan.
This is probably one of the two portraits of him being critically discussed in Letter of 21 Apr [think 1857].

William Henry Gibbon,
William, born 14 Jan 1832.
He was educ English Grammar School, Heidelberg, Germany. NOT at University of Heidelberg.
Heidelberg was not in the Austrian Empire, but he would go on to join the Austrian Army.
His sister Georgina married 1846 to a German Baron and they lived Austria.
He received a note of introduction from Lady Pembroke in Feb 1848 (him age 16), addressed to the British Ambassador to Austria. She "ventures to give this line of introduction to Mr. William Gibbon, a young man she feels interested in owing to the circumstance of his mother having been a ward of her husband, the late Lord Pembroke and the whole family more or less under his guardianship." Letter says William has intention of entering the Austrian Army.
He was in Heidelberg as at 1848.

Officer in Austrian Empire:
William joined the Austrian Army in the war between Austria and (most of) Italy, now called the First Italian War of Independence, in 1848 (he was only age 16). The Austrian Empire at this time included part of northern Italy.
He started as an Ensign. Rapidly promoted to Captain for gallantry on the battlefield.
He was described as "formerly an Officer in the Austrian Army" in will of Cecilia Markham 1866.
[Bentley's Miscellany, 1853] says that in 1848, Gibbon "together with Count Spaur, an Austrian, followed by 30 men only, stormed a breach at Rivoli" [Rivoli Veronese, NE Italy] "and carried it, driving back a considerable force" [of Piedmontese] "who were defending it. To the young ensign," [Gibbon] "who was instantly promoted for his gallant conduct, was due the credit of having proposed this daring exploit to Count Spaur. Mr. Gibbon escaped unhurt, but Count Spaur received many wounds."

After a truce in 1848, war broke out again in 1849.
William distinguished himself again in the Battle of Novara, NW Italy, March 22-23, 1849.
One army letter said about him and a few other officers also praised: "It is a pity that they are so young that one can not give them a large body to command, they would do wonders".
After hostilities ended (must be the time in 1849) he was decorated by the new young Emperor Franz Joseph I (succ December 1848) in person.
Poem of 1849 references him: "And Willy, with his curling locks; Was then a baby in your arms; Dreaming not then of "War's Alarms"; But since these years have taken flight; Your hero bold has learned to fight".
His sister Margaret married 1850 to a Baron in the Austrian army.

William mar 1stly, 24 Mar 1854, to Flora Fogolari [Flora Elizabeth Francisca Fogolari, born 26 Oct 1832, dau of Joseph Fogolari, banker].
She is also listed as "Flora de Fogolari D'Asolda". NOT Fogalari. NOT Franzisca.
"Willy" and "Flora" are mentioned before their marriage in letter of 5 Nov 1853 from Willy's mother.
They were married at Venice, Italy, by a Catholic clergyman.
And again later at Colchester (see below).

Goes to South Africa, 1857:
After the Crimean War, Britain had the problem of what to do with all these foreign nationals it had recruited, many of whom were now unwelcome in their home countries. Britain decided to use them to help settle South Africa. Land was granted by Britain to members of the British German Legion in the Eastern Cape, South Africa.
An effort was made to get all these young single men married before they went, so that they might settle in South Africa and not wander again. Wives and children got free passage. This might have prompted Gibbon's second marriage ceremony, to make sure he was married under English law.
The men were settled in Eastern Cape 1857, though they still had some military responsibilities.
William Henry went to South Africa (The Cape Colony, or "The Cape"), 1857.
He was living at Grahamstown, Eastern Cape, South Africa (see map) as at 1857.

He settled in 1858 at Alexandria, Eastern Cape, South Africa (between Port Elizabeth and Grahamstown, see wider map and closer satellite view). He lived there for rest of his life.
Grave says he arrived at Alexandria 16 March 1858.
The South African British-German Legion finally disbanded 1861.
Letter of 10 Oct 1869 to William's mother Elizabeth Gibbon expresses concern about "your poor daughter in law at the Cape, for whom I am aware you have ever cherished a sincere affection". This is after the death of Flora's son age 5 in July 1869. Letter says Flora has taken it hard: "no wonder her mind was unable to stand the shock."
He is listed as "late Captain, German Legion", living Alexandria, at son Sidney's bapt 1870.

Divorce case:
William and Flora divorced, after "a long drawn-out affair".
Flora committed adultery with an Officer on a ship on a voyage from South Africa to England.
She signed a confession at Alexandria, 13 Aug 1872. She says: "I left Algoa Bay on 29 Jan 1871" [her age 38, apparently leaving her new baby and other children behind] "as a 1st class passenger in the steamer 'Northain' bound to Southampton. The vessel touched at Table Bay ... After leaving Table Bay and recovering from sea sickness I met on board a person styling himself Captain Valler, an officer belonging to the Union Mail Service." [the shipping line, the Union Mail Packets Company, which later merged to form the Union-Castle Line] "I occupied a cabin alone ... About 12 days after leaving Table Bay, after myself and all the passengers had retired for the night, on two several occasions the said Captain Valler entered my cabin, and on his persuasion I on both occasions committed adultery with him, and I make this voluntary admission as an atonement to my husband for the wrong I have done him."
Letter of 22 Mar 1872 to William's brother says "I hear your sister in law, Mrs. William, is just on the eve of returning" [i.e. returning to South Africa from her trip to Europe].
William and his wife eventually divorced 12 July 1883.
Their divorce is not found in UK list of Private Acts (including divorces) 1866-1910.
After divorce she settled in Romania. All surviving children grown-up at this point except Sidney.
William Henry is listed as an "Inspector of Roads" at 2nd mar 1883. He is described as "widower" but think this is wrong.

He had issue by 1st wife:

They lived Alexandria.
He died Alexandria, 16th Feb 1894, age 62 yrs.
He was bur at Alexandria cemetery, Eastern Cape.
After his brother's death, Arthur Augustus Gibbon paid an allowance to Elizabeth (in Alexandria) until his own death 1907.
Elizabeth died Alexandria, 6 Feb 1930, age 80 yrs.
William Henry had issue by 2nd wife:

Extract from [Bentley's Miscellany, 1853] about William Henry Gibbon's exploits in First Italian War of Independence in 1848.

Supposed to be Elizabeth van Niekerk.
But does not match pictures above. Must be an older woman.
Image courtesy of Mike Hilligan.

Sketches of a girl

There are two, almost identical, sketches of an unknown girl.
The envelope seems to say that the sketches are by William Henry Gibbon in 1848 (when he was age 16).
A note says: "Sister? Georgina?"
This sheet may refer to the picture and say it is Georgina.
However, William's sister Georgina was married, age 25, in 1848. This girl looks too young. And doesn't look like her.
And also too young for his sister Margaret (age 30 and married). 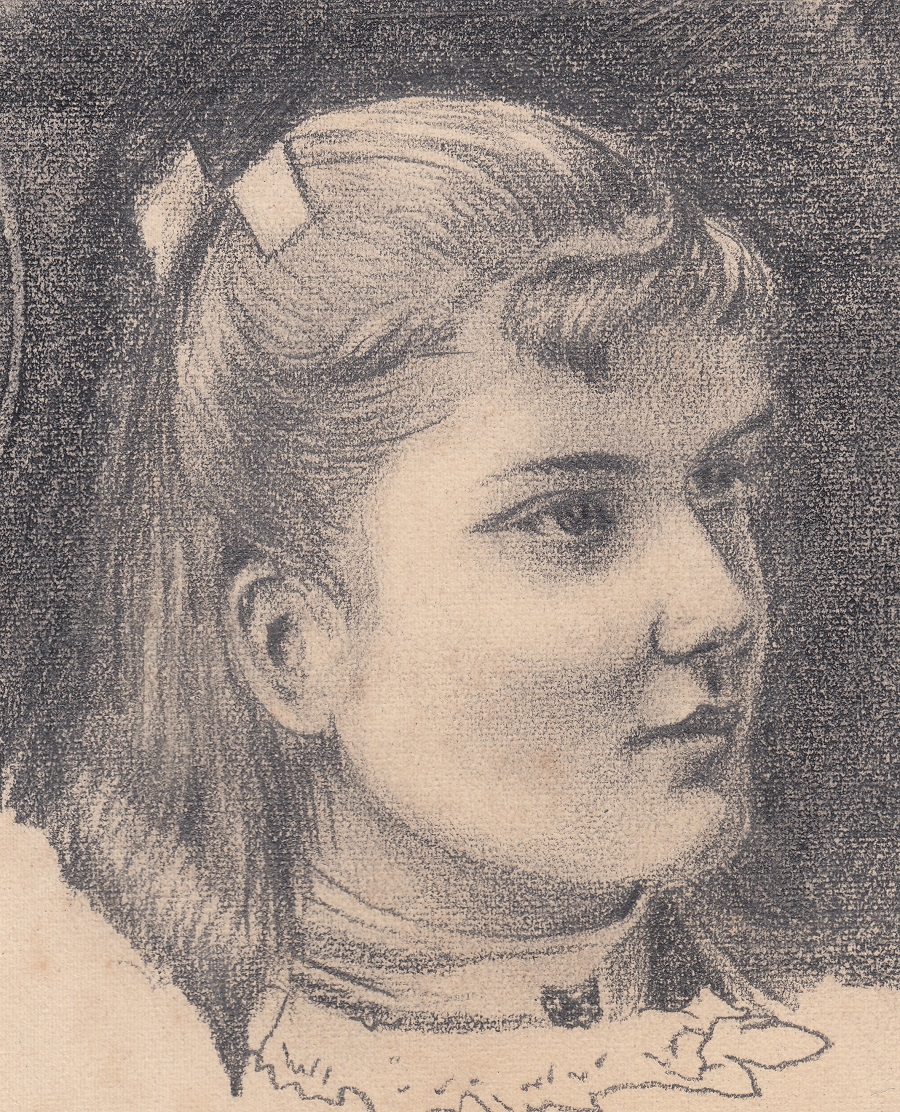 These are prob. relations of one of the wives of William Henry Gibbon.

Unknown.
This picture was found among the possessions of Ruby Hilligan, with "Your Great Aunt Jessie" written on it.
Was thought to be Jessie Mary Flora Gibbon, but she died as a child.
Image courtesy of Mike Hilligan.

Count Carlo Guicciardi.
This picture was found among the possessions of Ruby Hilligan, with "your cousin Carlo" written on it.
Image courtesy of Mike Hilligan.

Albina Guicciardi, Contessa di Cervarolo,
who married Antonio Winspeare [born 1840, Prefect of Florence, Prefect of Turin, Prefect of Milan, Prefect of Venice, died 1913, NOT Heanspeare].
Winspeare were an old English Catholic family who left for exile in Italy after the fall of the Stuart cause.
Albina is probably sister of Count Carlo Guicciardi.
Image courtesy of Mike Hilligan.

"There is one warning lesson in life which few of us have not received, and no book that I can call to memory has noted down with an adequate emphasis. It is this: "Beware of parting!" The true sadness is not in the pain of the parting, it is in the "When" and the "How" you are to meet again with the face about to vanish from your view! From the passionate farewell to the woman who has your heart in her keeping, to the cordial good-by exchanged with pleasant companions at a watering place, a country house, or the close of a festive day's blythe and careless excursion - a cord, stronger or weaker, is snapped asunder in every parting, and Time's busy fingers are not practised in re-splicing broken ties. Meet again you may: will it be in the same way? - with the same sympathies? - with the same sentiments? Will the souls, hurrying on in diverse paths, unite once more, as if the interval had been a dream? Rarely, rarely! ... Are you happy in the spot on which you tarry with the persons whose voices are now melodious to your ear? - beware of parting; or, if part you must, say not in insolent defiance of Time and Destiny, 'What matters! - we shall soon meet again.'"
- William Henry Gibbon, 27 June 1886.