A miniature copy of a portrait, inherited in the Kerr/Gibbon family.
Written on the back: "Colonel Kerr?"
This must be John Manners Kerr, Lieutenant Colonel and Colonel in 1794-1808.
He did have a grandson who was a Colonel William Frederick Kerr, maybe around the 1860s, but the portrait is too early to be him.
See larger and full size. Photographed by me in 2016. See alternate shot and alternate shot.
See small shot. Photographed by me in 2007. John Manners Kerr,
General in British Army, Sheriff of Merionethshire,
born 30 Oct 1766,
descendant of Robert III, King of Scotland and of Henry I.
See entry in tree by Jenny Poll.
See entry in Wyndham Marsh genealogy.
See entry in Maesmor tree by Lavinia Phillips.
His father was a surgeon in Northampton.

West Indies:
He went with his regiment to Barbados in the West Indies. He was in the West Indies for over a decade.
Listed as Captain at mar 1791.
He mar 1stly, 25 Apr 1791, in Barbados, to Isabella Errington [born 17 Apr 1774, Barbados]. She was age 17. He was age 24.
Britain and France went to war in Feb 1793.
He was Captain of the 60th Foot in the attack on Tobago, which they captured from the French in Apr 1793.
Became Major 29 June 1794.
Became Lieutenant colonel 25 Oct 1794.
Stayed in West Indies until May 1795 [Obituary].
Appointed 1794 or 1795 commander of Northampton Regiment of Fencible Infantry with rank of Colonel-Commandant. This regiment was raised in 1793 by his father Dr. William Kerr. John Manners Kerr was their commander until the regiment disbanded in 1801.
The Northampton Fencibles were based in Ireland.
He transferred to the 62nd Foot in Mar 1798.
His son was bapt at Tiverton, Devon, in May 1799.
Appointed Colonel 1 Jan 1801.
He was Commander of the Forces in the islands of Grenada, Dominica, Barbados and St. Vincent 1801-04.
Child baptised in Northampton in Sept 1801.
He was appointed Brigadier General in West Indies on 5 Feb 1802 [Obituary]. 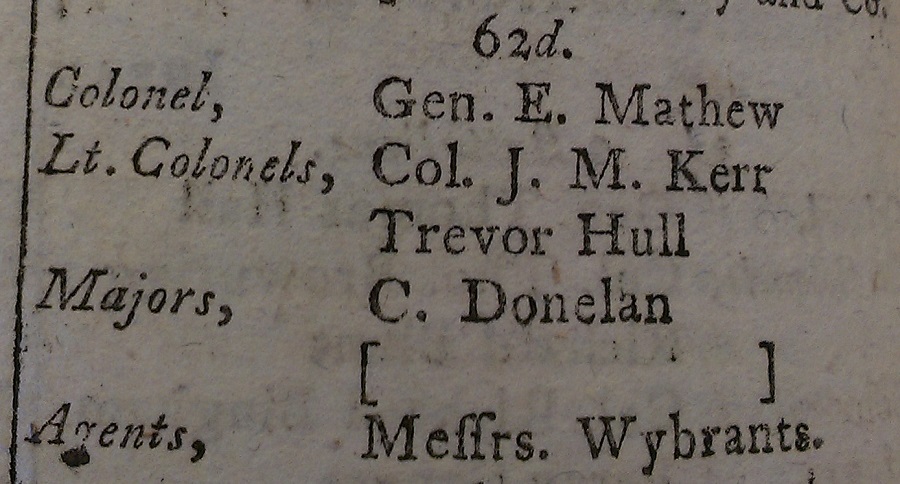 John Manners Kerr listed as Colonel with the 62nd Foot in [Dublin Almanack, 1804].
He is serving in Ireland.
See full size. 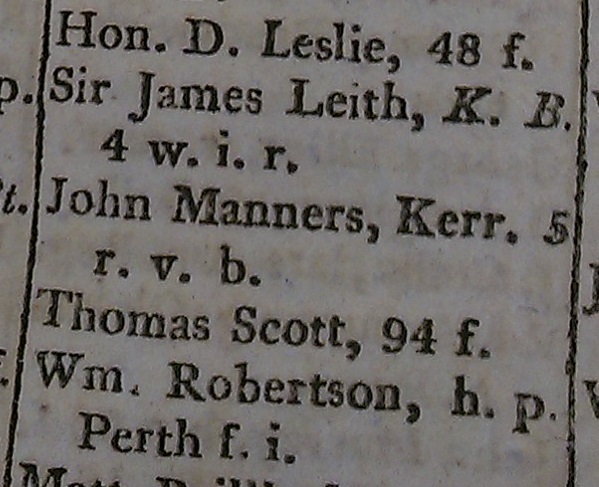 John Manners Kerr listed among the Lieutenant-Generals in [Dublin Almanack, 1814].
He is with the 5th Royal Veteran Battalion.
See full size.

Letter from John Manners Kerr to A. Campbell. From Paris, 27 January 1820.

Signature of John Manners Kerr.
From the 1820 letter.