His father came to Maesmor, Wales, through a 3rd marriage in 1829.
His children were born in various places as he travelled with the Navy.
His son was born at Selsey, near Portsmouth, in Apr 1830.
He was appointed Lieutenant in Royal Navy on 13 Aug 1830.
He is listed as Lieutenant in [Navy List, Sept 1830].
His son was born in Jersey, Channel Islands, in 1832.
His son was baptised at Boulogne-sur-Mer, NE France, in 1836. At son's baptism he is listed as Lieutenant, living Rue de l'Hopital, Boulogne-sur-Mer (outside the old city, see map).
At dau's birth 1838, he is living at the port of Harwich, Essex. Lieutenant in Royal Navy.
Another dau born Harwich in 1840.
They are listed in 1841 census at High St, Llangollen Abbot (or Llangollen Abad), Llangollen, Denbighshire, Wales (see map, some distance E of his father's house Maesmor).
His dau was born 1842 or 1843 at Llangollen.
His father died 1843.
His son Frank possibly born Northampton in 1844.
Still listed as Lieutenant in [Navy List, Jan 1850].
His step-mother died 1859.
Listed as Lieutenant on half-pay in [Navy List, Mar 1860].
They moved to the area of Crickhowell, NW of Abergavenny, SE Wales (see map).
They are listed in 1861 census as living in lodgings at Oak House (unidentified), Crickhowell. He is Lieutenant.

He moved to Moor Park, Llanbedr, near Crickhowell, Wales.
He wrote letter of 2 Feb 1870 from Moor Park to his son-in-law Arthur Augustus Gibbon. After death of Arthur's mother.
Listed as Commander on retired list in [Navy List, June 1870] and [Navy List, Dec 1871].
They are listed in 1871 census at Moor Park. He is "Retired Commander R.N."
At death he is described as "Captain in the Navy, on half pay". But can't see how he could be Captain (already retired as Commander). Described as Captain at his son Frank's mar.

[House Book of Arthur Augustus Gibbon] records payment of a periodic allowance to (his mother-in-law) "Mrs. Kerr", late 1870s to early 1880s.
Harriett is listed in [UK census, 1881] at Cwmbach, near Glasbury, Brecon, Wales (some distance N of Crickhowell, see map). She is widow, living on (navy) pension.
She is NOT Harriett Kerr, died Islington, 4th qr 1893 [GRO.UK].
[House Book of Arthur Augustus Gibbon] refers to "Mrs. Harriet Kerr" on 16 Aug 1900. This could be her.
John James and Harriett had issue: 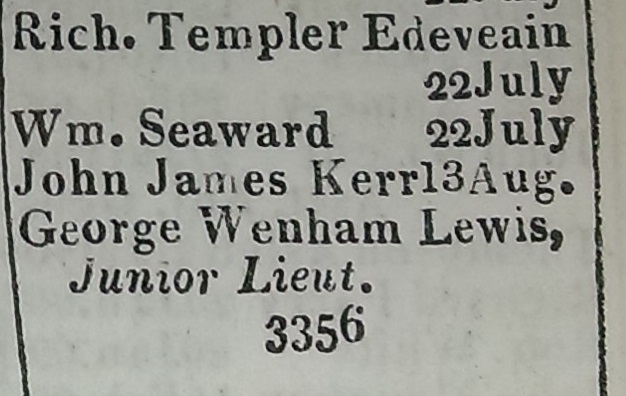 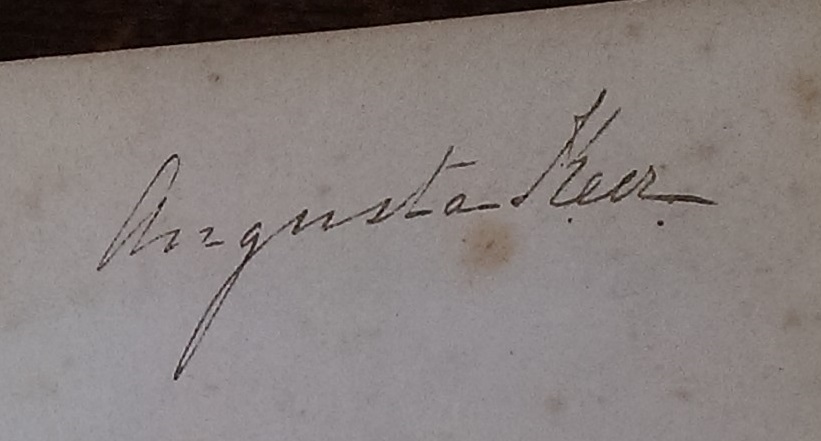 Signature of Augusta Kerr in a book.
See full size.
The book is a copy of the poetry of John Milton, dated 1844. See cover page. 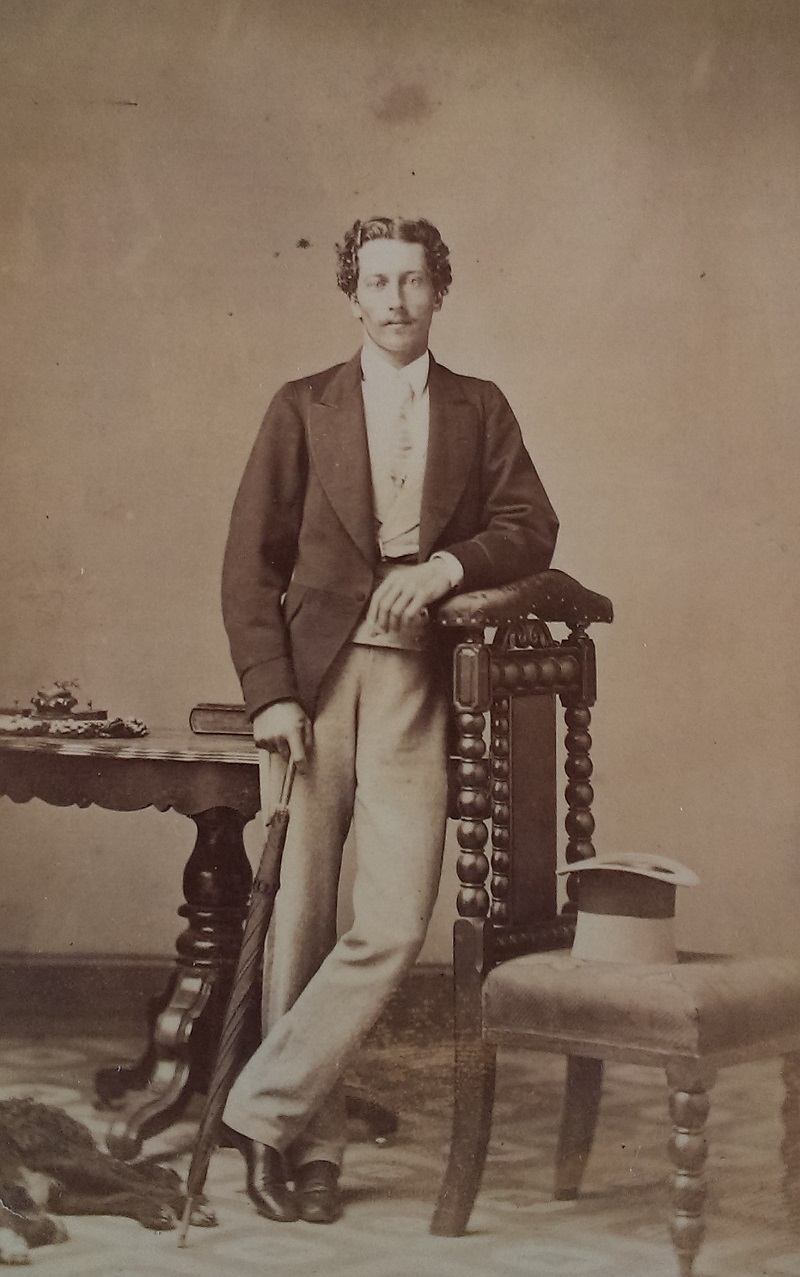 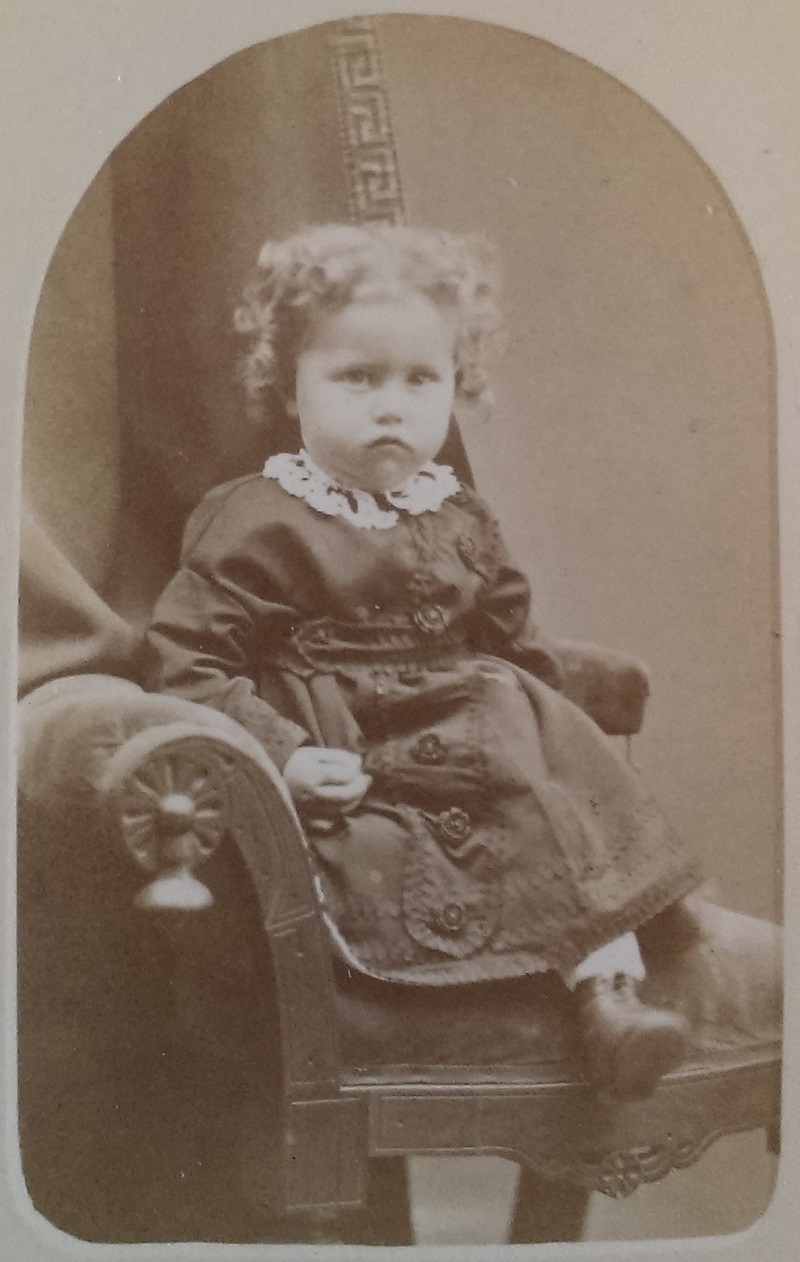