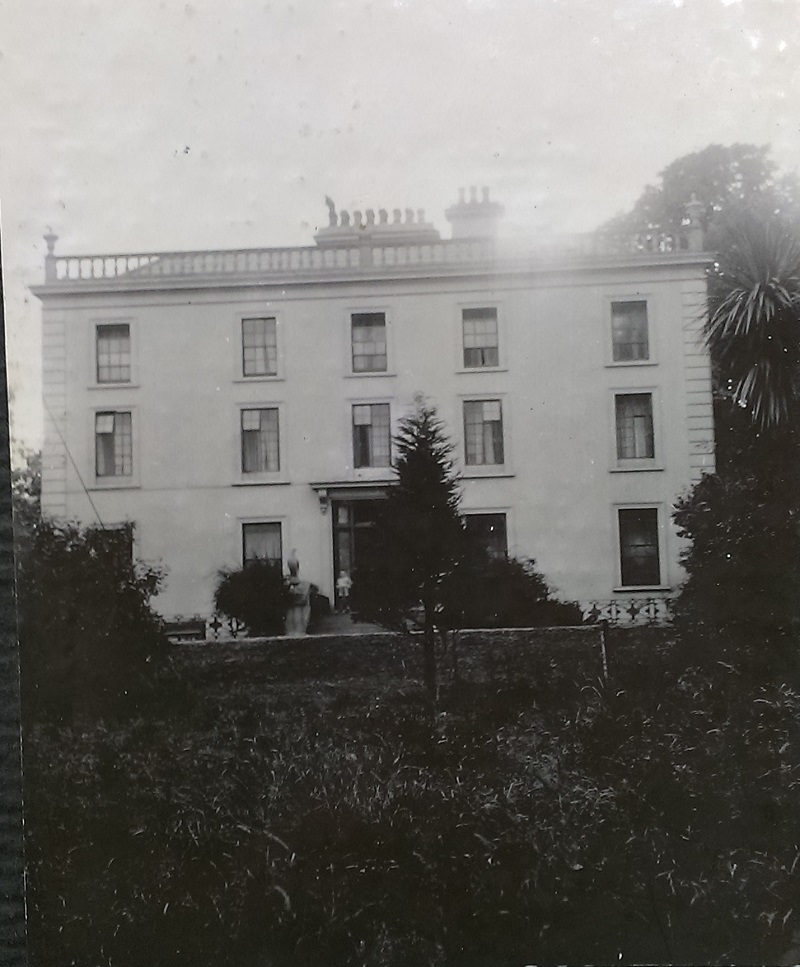 Strand House stood in extensive grounds, near the river at Sarsfield Bridge, at the start of the Ennis Road, Limerick city.
It appears to be the house known as "Stonetown House" built between 1760 and 1770 by Vandeleur.
In the 19th century it was the residence of Gabbett.
Daniel Gabbett is listed at "Strand House" in [Slater's directory, 1846].

Stephen O'Mara moved to Strand House c.1909.
His widowed daughter Mary Rynne moved in there with him. (Her husband had died in 1907.)
Mary Rynne writes letter of 25 Jan 1910 from Strand House.
Stephen's wife Ellen Pigott died at Strand House in Oct 1910.

Stephen O'Mara and his daughter Mary are listed in 1911 census at Strand House. There are two servants living with the family.
The house has 16 rooms, and 14 windows in front of house.
There are 6 out-buildings - consisting of 1 stable, 2 coach houses, 1 harness room, 1 cow house and 1 fowl house.

Stephen O'Mara died 1926.
The younger Stephen O'Mara then lived at Strand House.
His sister-in-law, the writer Kate O'Brien, often stayed at Strand House and wrote there. She finished writing The Ante-Room there in 1934. The dedication in the book reads: "To Nance and Stephen O'Mara under whose kind roof the greater part of this book was written, I dedicate it with my love and gratitude."

Limerick Corporation did not use the Strand House grounds for a new town hall.
In 1962 they sold the site to InterContinental Hotels, gave money to O'Mara family.
Hotel built on site.
The hotel was bought in 1970 by Jurys Hotels.
It was Jurys Hotel, Limerick, for many years.
The old hotel is now demolished. Site was re-developed as "The Strand", Limerick (apartments) and the Strand Hotel.

The first and second Strand Houses are both demolished.
Ivy Bank ("New Strand House") survives.
No trace of Strand House left. Some of the old wall survives.

The grounds of Strand House before re-development.
See full size.
Formerly at thestrandlimerick.com.

Eamon de Valera staying with Stephen O'Mara at Strand House, as the Treaty was being signed in London, night of 5-6 Dec 1921.
This was taken the morning after the Treaty was signed, 6 Dec 1921.
Back (Left to Right): Michael Rynne (aide-de-camp to Dick Mulcahy), Dick Mulcahy (Chief of Staff of IRA).
Front (Left to Right): Mary O'Mara, Eamon de Valera (President of the Irish Republic), Stephen O'Mara, Cathal Brugha (Minister for Defence).
This is front door (see doorbell).
This has been printed elsewhere flipped left-right. But apparently the above is the correct way round (doorbell on RHS).
See full size.

The documentary An Conradh 1921

The murdered Mayors of Limerick

During the War of Independence, Stephen O'Mara of Strand House was elected Mayor of Limerick on 22 March 1921.
His two predecessors, Michael O'Callaghan (Mayor 1920-21) and George Clancy (also here, Mayor Jan-Mar 1921, killed in office) had just been murdered in their homes by the Black and Tans in the small hours of 7 Mar 1921.

Stephen O'Mara's life was under threat until the end of the War of Independence.
He served as Mayor of Limerick until 1923.
He later organised a memorial to O'Callaghan and Clancy at the corner of the Strand House site near the bridge. See street view.
The two parts of the strand are named O'Callaghan's Strand and Clancy's Strand after them. Also O'Callaghan Ave.

The memorial to the murdered Mayors (and others) at the Strand House site.
Photo 2016. See larger and full size.
See other shot.

The memorial to the murdered Mayors.

Strand House - The garden side