Dr. Michael Rynne,
born 29 Sept 1867, Ennis, Co.Clare.
He may descend (not proved) through Nugent from Edward I and Aoife and Strongbow and Brian Boru.
He was educ St. Flannan's college, Ennis.
He was educ TCD, BA 1889 [TCD Calendar].

Became a doctor, surgeon. LM, MB, B.Ch., B.A.O, all in 1890. MD 1893 [TCD Calendar].
Assistant Surgeon at Mayo Infirmary.
Also worked in Dublin hospitals, and on an American line of steam ships.
He went to England. Became a doctor at Southampton. He was ship's doctor (merchant navy), stayed in port.
Letter of 10 March 1897 says he is living Beaconsfield House, Totton, just outside Southampton.
At marriage 1898 he is living Totton.

He mar 1898 to Mary O'Mara [born 11 June 1876].
They lived Southampton. Letter of 1899 is addressed to them at Beaconsfield House, Totton.
At children's births 1899 to 1901 they are listed as living Eling Lane, Eling, near Totton, near Southampton (see map).
At dau's birth 1904 and Christmas card 1905 they are living Eling Lodge, Eling.
They moved to Cheltenham, Gloucestershire, early 1907, where he purchased a medical practice (also his residence), "Mangalore", 1 Osborne Villas, Queens Rd, Cheltenham.
Letter of 22 Jan 1907 is about his forthcoming move to Cheltenham.

Mary was left with 3 small children.
She came back to Ireland with children and moved into father's new house, Strand House, Limerick.
She writes letter of 25 Jan 1910 from Strand House.
Her mother died in Oct 1910.
Mary continued to live at Strand House with her father. She was the lady of the house.
She is listed at Strand House with father in census 1911.
She went to Connie von Trapp's wedding, Austria, 1914.
She had a role in Jim Sullivan's film Knocknagow (shot 1917, released 1918). She went under a pseudonym since it wouldn't have been quite the thing to do for such a respectable lady, a director of O'Mara's company.
She did not sell "Mangalore", Cheltenham, until 1919. She must have kept it and rented it out until then.

She was living in 1930s (temp 1931-34) at Airfield, Stillorgan Rd, Donnybrook.
She was a Director of O'Mara's bacon company at time of O'Mara's centenary, 1939.
Grandchildren called her "Grakkie".
She lived to see great-grandchildren.
She was living "Greenfields", Milltown, Co.Dublin, from at least 1947 to death.
She died 6 Feb 1961, 96 Lr Leeson St, Dublin, age 84 yrs [GROI].
Her death cert incorrectly describes her as widow of a "solicitor".
She was bur Drumcliff Cemetery, Ennis, Co.Clare.
Dr. Michael and Mary had issue:

Eling Lodge, Eling, Southampton.
Christmas card 1905.
See full size.
Eling Lodge was a doctor's surgery until it was demolished in the 1930s when the Totton bypass was built.

Home of Mary O'Mara in 1930s.
Not to be confused with Airfield, Dundrum. 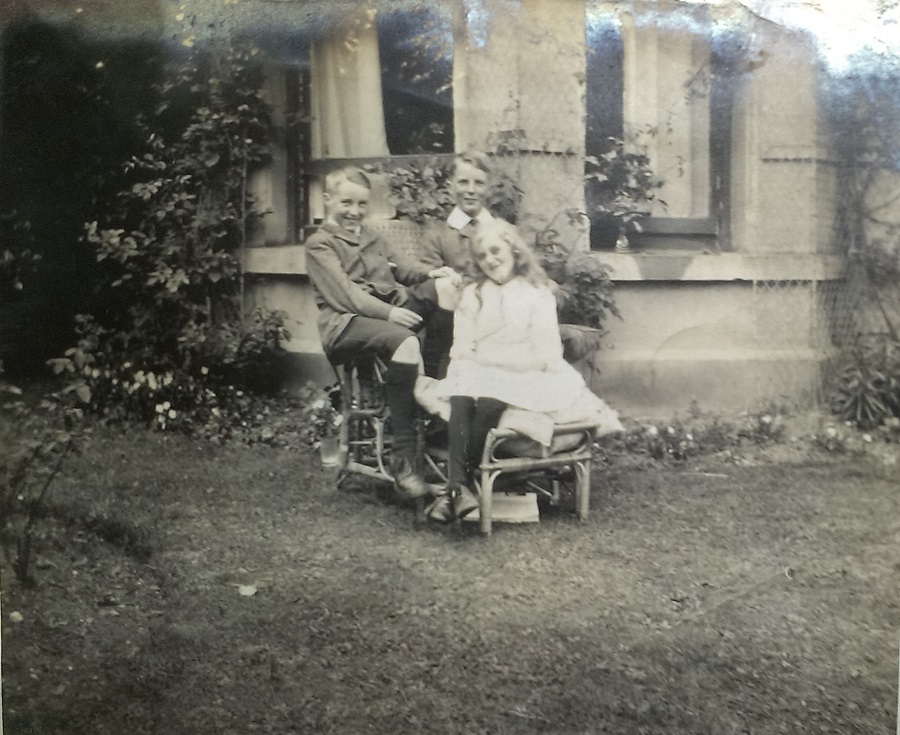 Stephen, Michael and Mary Rynne.
This would be the S end of Strand House.
See larger and full size.
From [P40/910]. Used with permission of [UL Archives]. 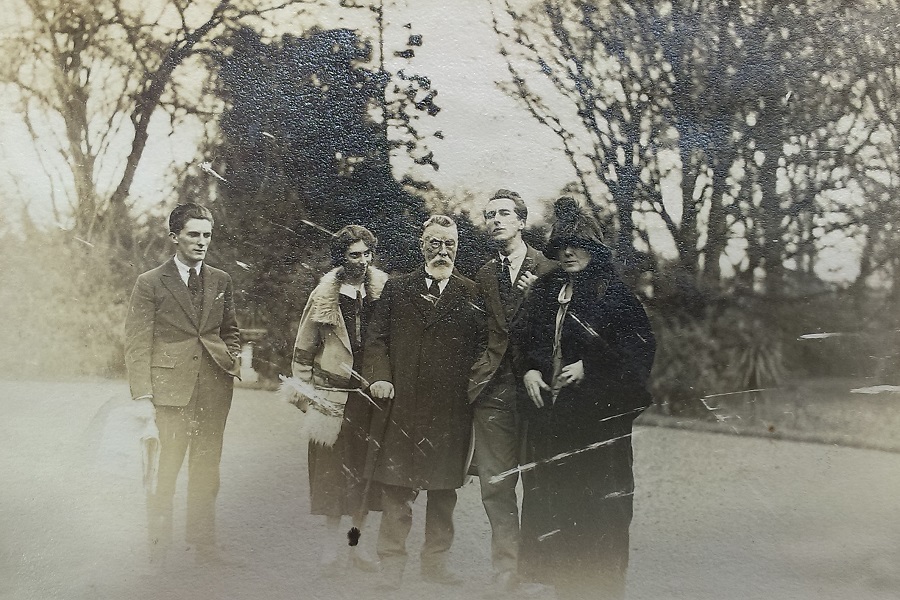 Stephen O'Mara and the Rynnes, shortly before Stephen's death in 1926.
See larger and full size.
From [P40/911]. Used with permission of [UL Archives]. 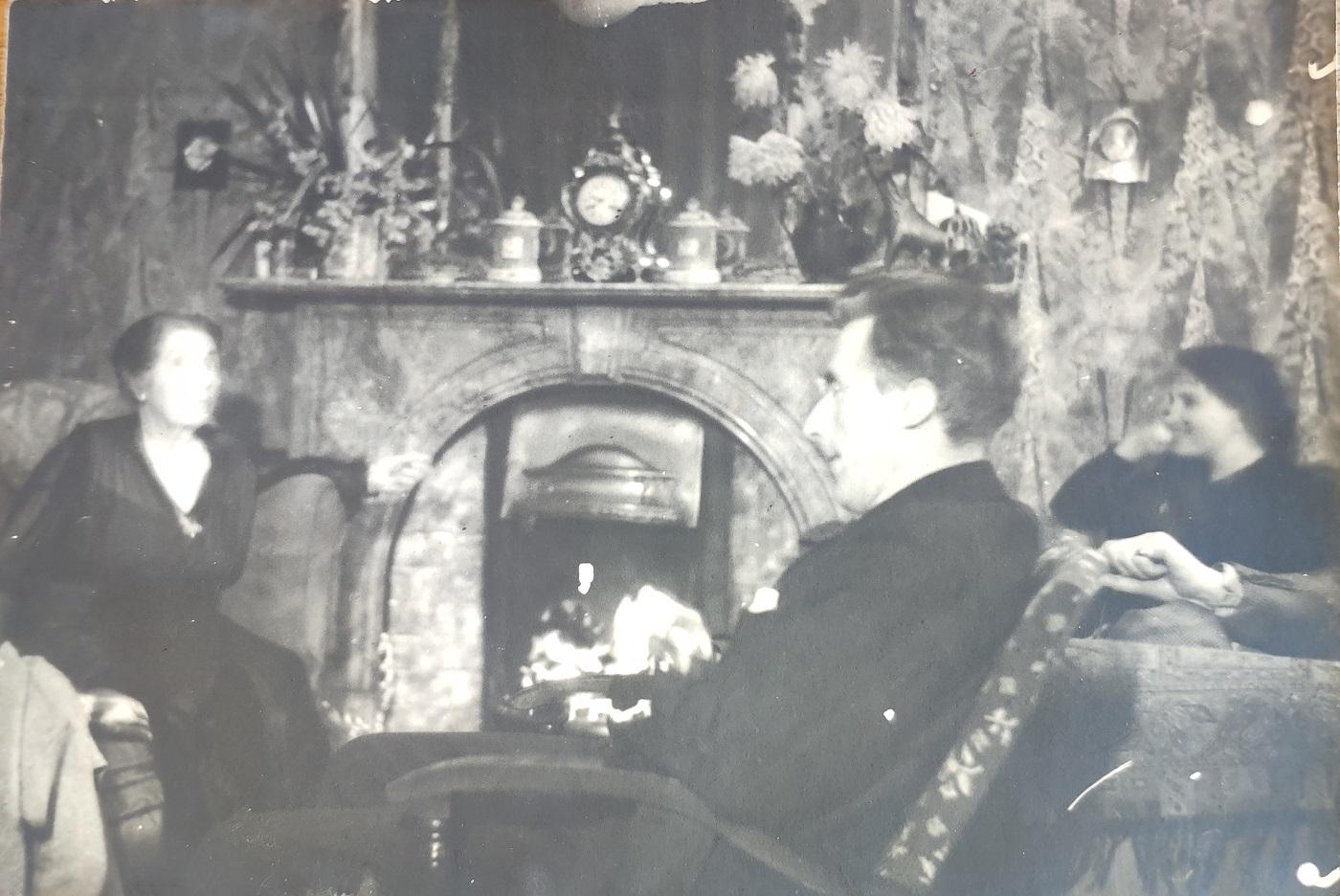