Cars belonging to The O'Rahilly. 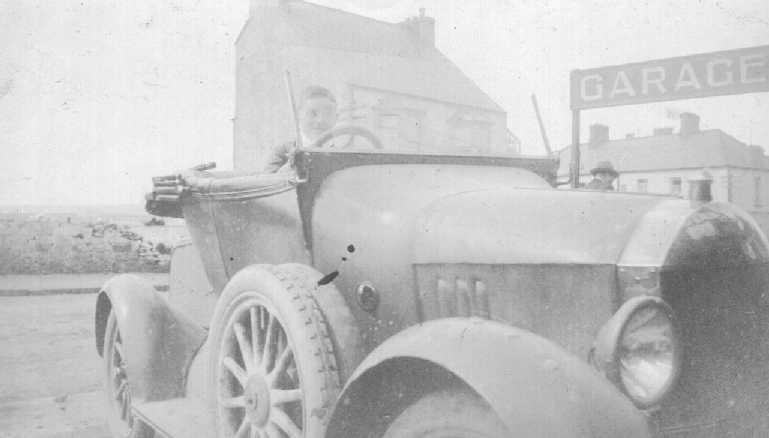 The O'Rahilly bought a De Dion Bouton automobile c.1911.
He had the body made by coachbuilders in Dublin. It may have been the first (southern) Irish-made automobile body.
It was blue (for France), but he painted it green for Ireland.
His Co.Kerry motor registration, 6 Feb 1913, is in [P102/118].
This shows it was a De Dion, 4 seater, 10 hp, painted green, registration IN 241 (Co.Kerry).

His nephew Dick Humphreys in [Dick, memoir] says: "Always a great supporter of Irish-made goods, and at the same time a keen motorist, when he decided to buy a car, he wished to buy an Irish-made one. This gave me a chance of a trip with him to Belfast where the Chambers Motor Co. were manufacturing the only home-built model in Ireland." [Chambers was the most successful Irish motor manufacturer, started making cars 1904, went out of business 1929]. "Unfortunately there was a long waiting list so he had regretfully to transfer his affection to a Dublin-built body on a "De Dion Bouton" chassis. O'Grady's of Dawson St were the actual makers."
[P102/116] is coach builder's letter.
[Dick, memoir] says: "This car was owned jointly by our two families." (i.e. The O'Rahilly and his sister Nell).
[P102/112] is a plan dated 8 Jan 1910 on how the two families will share an automobile.

Liam Cosgrave recalls: "My father" [i.e. W.T. Cosgrave] "drove with The O'Rahilly to a meeting in Balbriggan about 1915 in O'Rahilly's car. He was the only Sinn Feiner with a car. W.T. had to get out and wipe the rain off the windscreen. No wipers then."

In the 1916 Rising, the De Dion Bouton was used as part of a makeshift barricade on Prince's St (the lane running down the side of the GPO), where it was burnt out.
There was a long running story that rubble from the 1916 rising (including O'Rahilly's car) was buried under Hill 16 in Croke Park.
But this is nonsense, an urban legend. Hill 16 was not built on rubble from the Rising.

Dick Humphreys later (in 1929) had an all-Irish car built for himself, the Thomond. 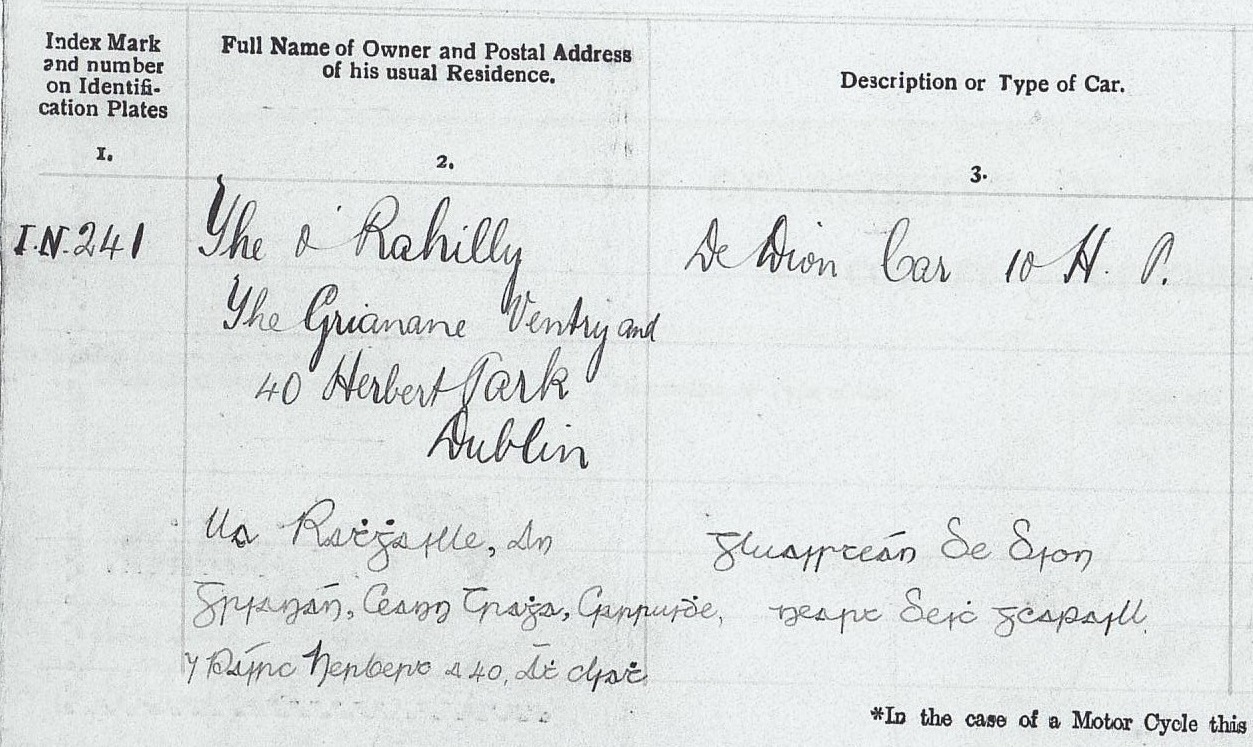 The O'Rahilly's De Dion Bouton (with custom Irish-made body).
Surrey Vintage Vehicle Society confirms this is a De Dion Bouton of around 1911.
Would be The O'Rahilly's sons in the car. Though doesn't look much like his wife Nancy Brown.
See full size.
This photo was used as a postcard in [P106/574(28)]. 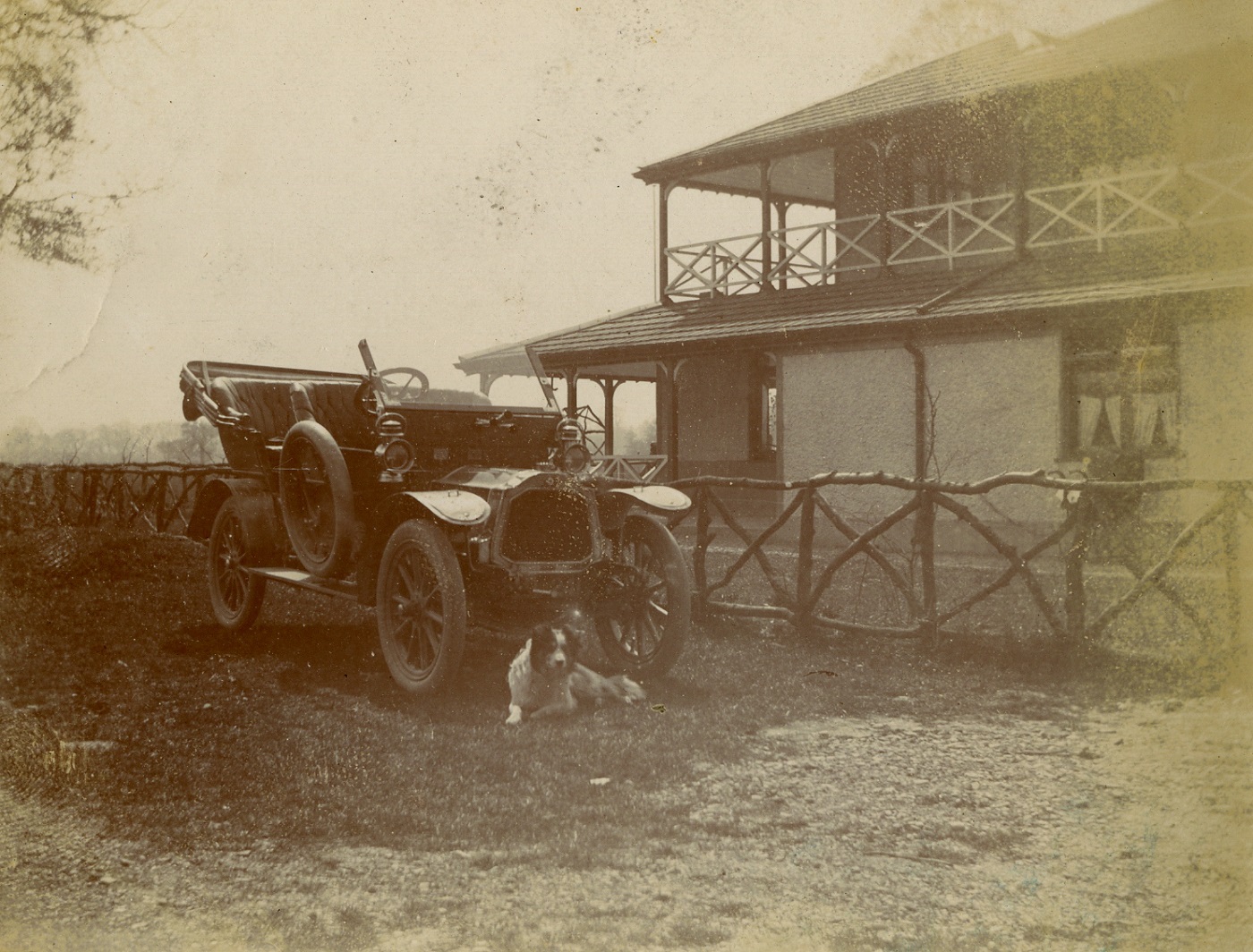 The burnt-out remains of The O'Rahilly's De Dion Bouton, used as part of a makeshift barricade in Prince's St, Dublin, 1916.
See full size.

A 1911 De Dion Bouton double phaeton.
From here.
Looks quite a bit like the above, especially bonnet and radiator.

Letter from Dublin Castle to The O'Rahilly's widow on 19 June 1916, about the wreck of his car.
A fairly ludicrous letter that says the car is just "partially burned". Photos show it is completely destroyed!
This is [P106/125] (see online).