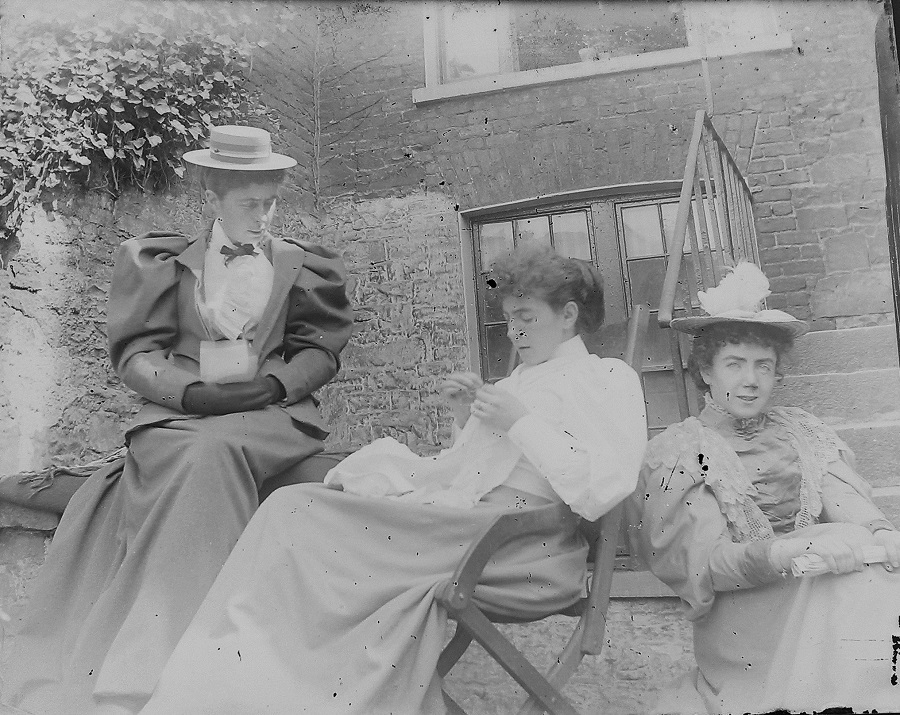 Left to Right: (a friend), Nell, Anno.
This was labelled as Northumberland Rd, Dublin (i.e. after 1909) but looks older (c.1900). Also think negative is older.
This might be the back of 18 The Crescent, Limerick.
It is the same place as here.
Image 5744 in Humphrys glass negatives. See larger and full size. Light-adjusted. See original.
See other scan and other scan.

She was an early nationalist. Sighle in [Mac Eoin, 1980] says Anno was a reader from 1899 on of Arthur Griffith's United Irishman. She says Anno was a big influence in her becoming nationalist and radical: "I got all of my ideas from her."
Her sister Nell and husband and children had joined them at Quinsborough by Sept 1902.
Nell's husband died 1903. Nell and Anno's mother died 1903. Anno never married, always lived with her sister Nell and family.
Anno had great interest in sport - golf, tennis, hunting, had them playing tennis on lawn at Quinsborough.
See Quinsborough photos.

She moved to Dublin with Nell and family 1909.
She joined Gaelic League.
Sighle in [Mac Eoin, 1980] recalls that Anno read all the radical nationalist press: "all of which came into our house."
[McCoole, 2003] says she was involved in Sinn Fein from 1914.
Along with her brother The O'Rahilly she reverted to the old spelling "O'Rahilly".
Her brother The O'Rahilly was a leader of the 1916 Rising, and he died in action.

Anno lived Ailesbury Rd with Nell's family.
She never married.
Despite her almost communist politics, she made a lot of money investing on the stock market in the mid 1920s.
She was a friend of Margaret Pearse, helped her keep St.Enda's going.
She played golf at Elm Park Golf Club.
After Nell died 1939, Anno lived on her own in Ailesbury Rd for many years.
First will dated 19 June 1947.
At her death she had shares in Ireland in Cement Ltd and Guinness and Permanent Building Society.
She also had shares in England in Imperial Chemical Industries and John Brown shipbuilders and Shell and Woolworths and United Drapery Stores and Distillers Company and Automatic Telephone and Electric Co.
[P106/208] shows she had shares in Lever Brothers and then Unilever.

Later will dated 24 Jan 1957.
She left money to the Good Shepherd convent, Sunday's Well, Cork, where her aunt Bridget Mangan (died 1915) and cousin Annie Mangan (died 1949) had been nuns. See also her cousin Alice Mangan.
She died 36 Ailesbury Rd, Mon 6th Oct 1958, age 85 yrs,
bur with her parents at Lislaughtin Abbey near Ballylongford.
She insisted on having Corrigan's of Dublin as the undertakers, as back in 1916 they were the only ones that would agree to bury her brother.
Funeral list in [P106/715]. Funeral mass celebrated by Alfred O'Rahilly.
The President and Taoiseach sent representatives to the funeral. Thomas McEllistrim, TD represented the Taoiseach.
Probate granted at Dublin, 5 Mar 1959. See probate and will p.1 and p.2 and p.3. (todo) See papers in [P106/296].
Emmet moved in to Ailesbury Rd. 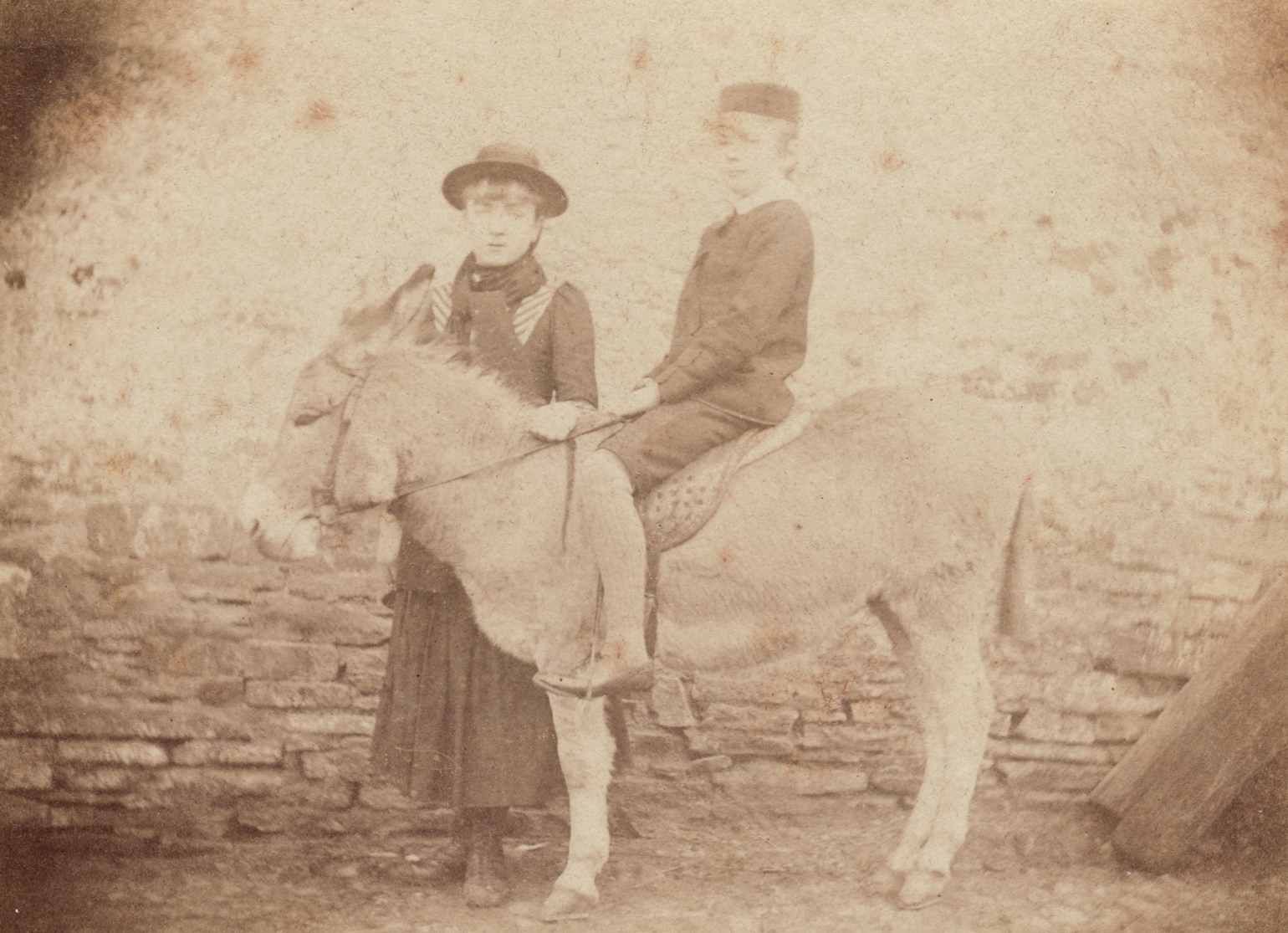 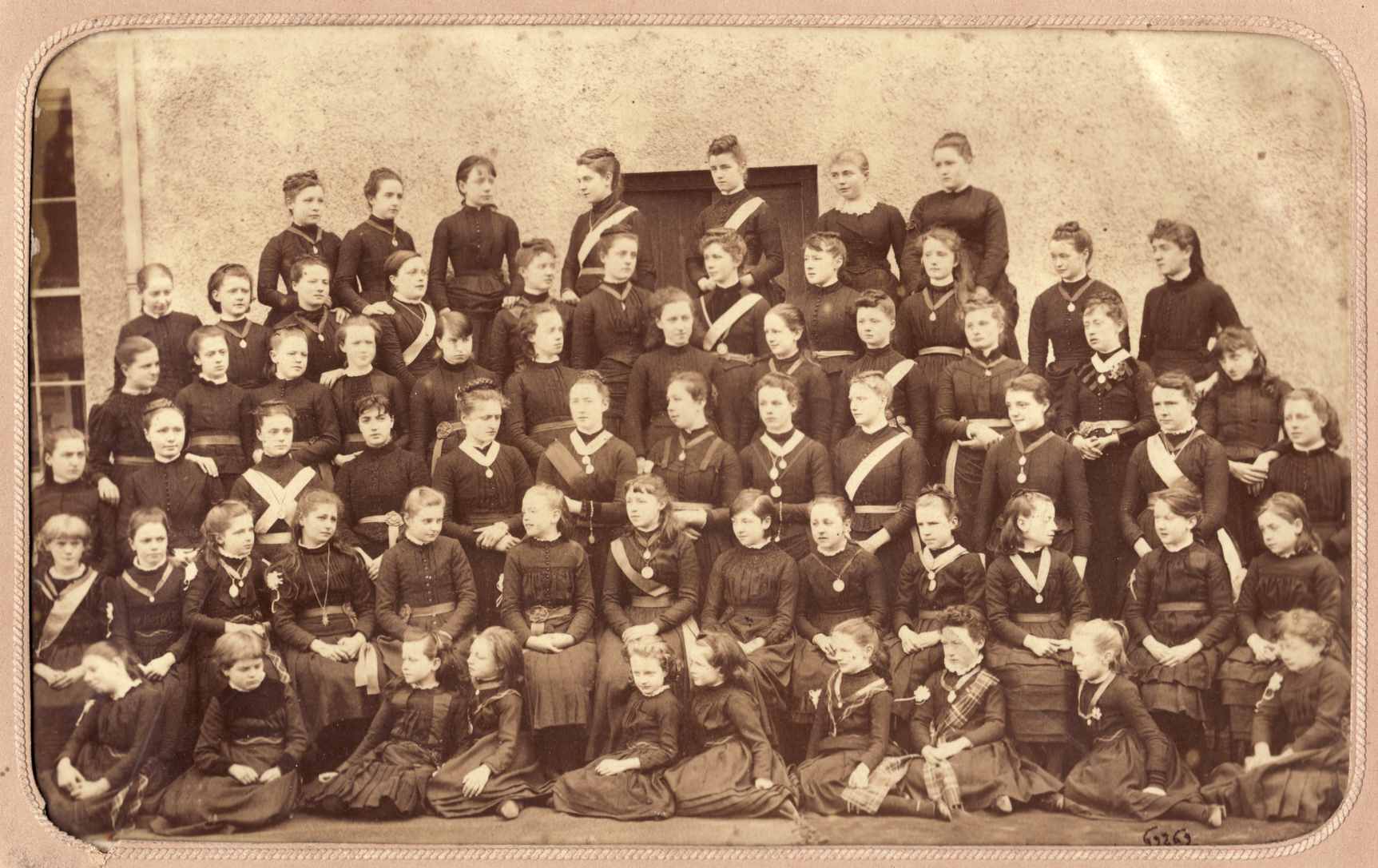 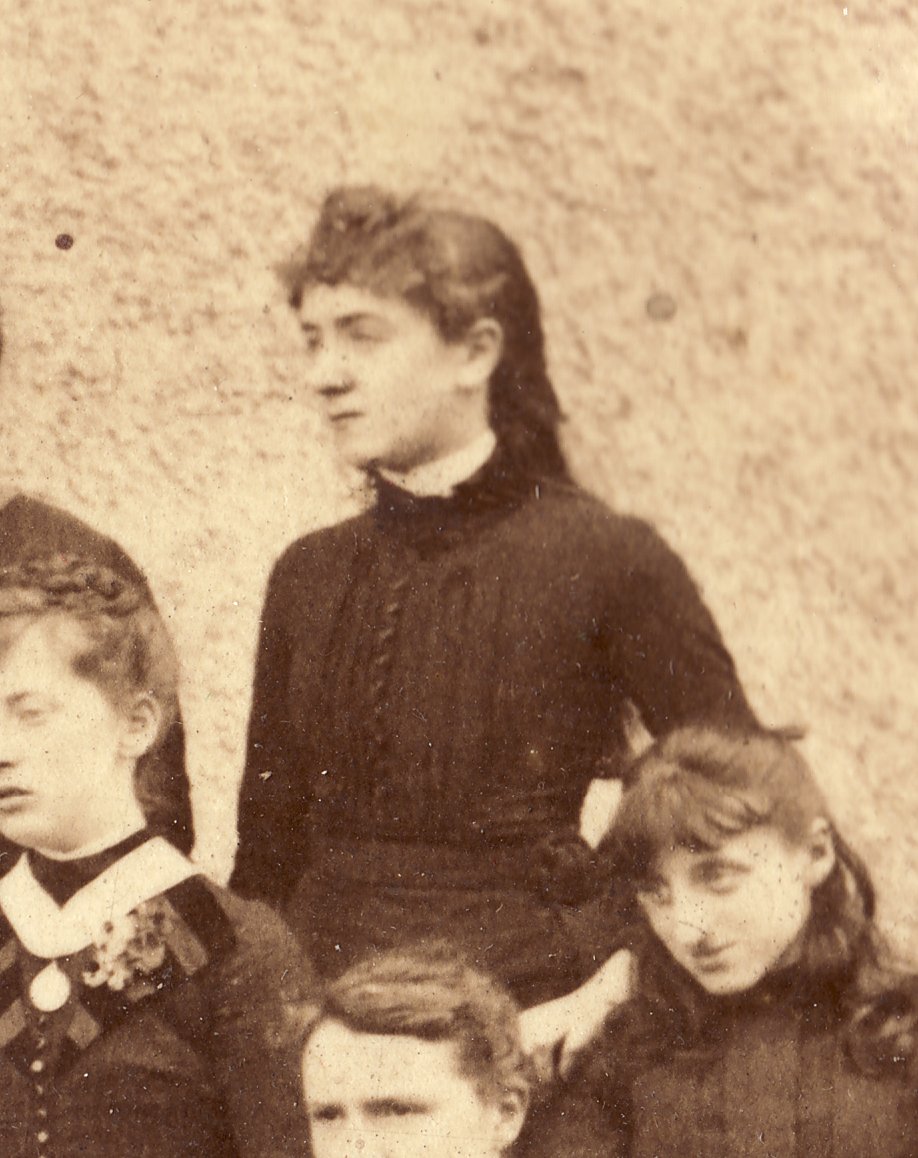 There are two Brandons listed as saddlers in BALLYLONGFORD in [Guy's, 1886].
The story is that when she was young, Anna eloped with Paddy Brandon, the son of a local harness-maker. 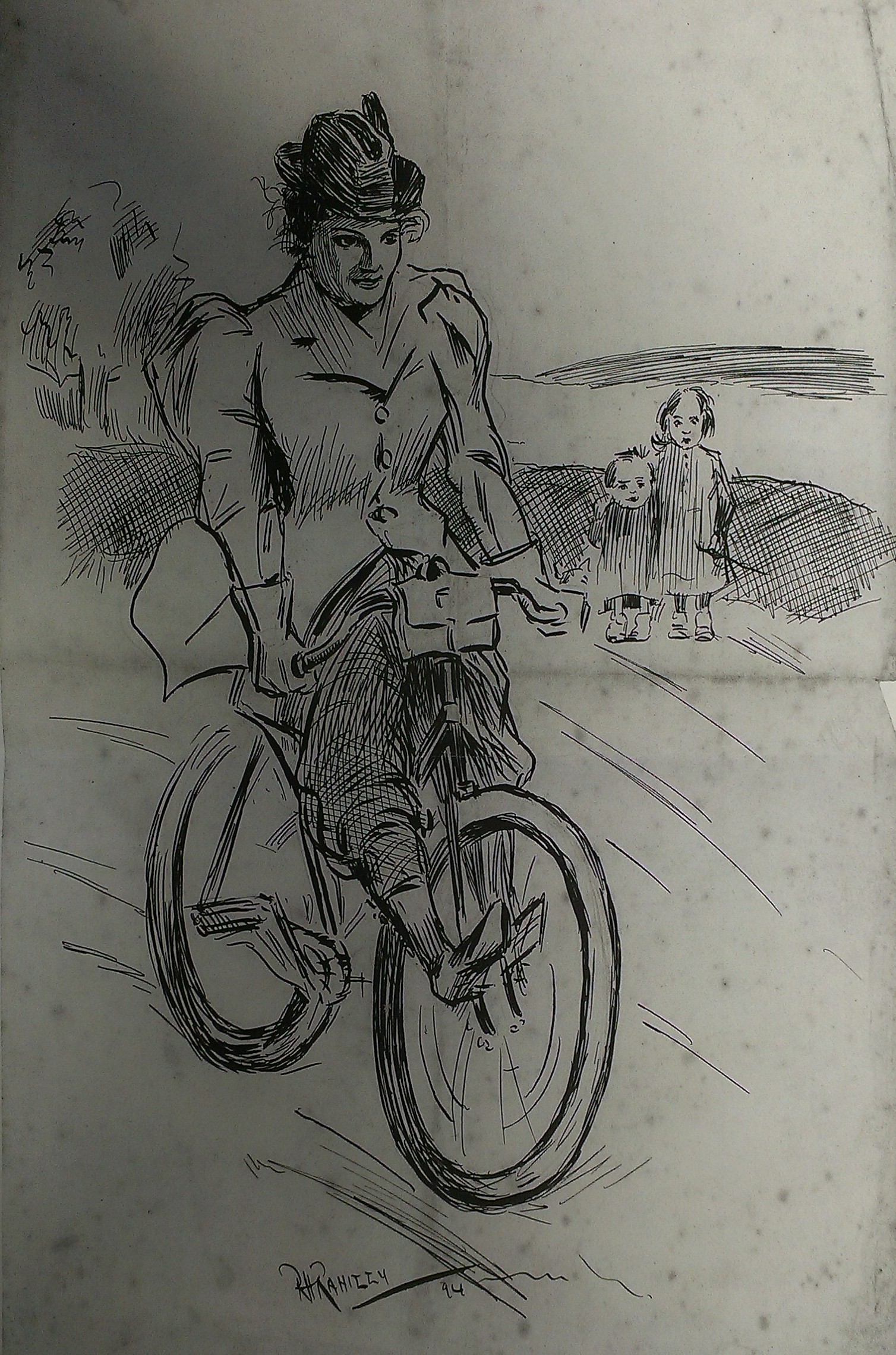 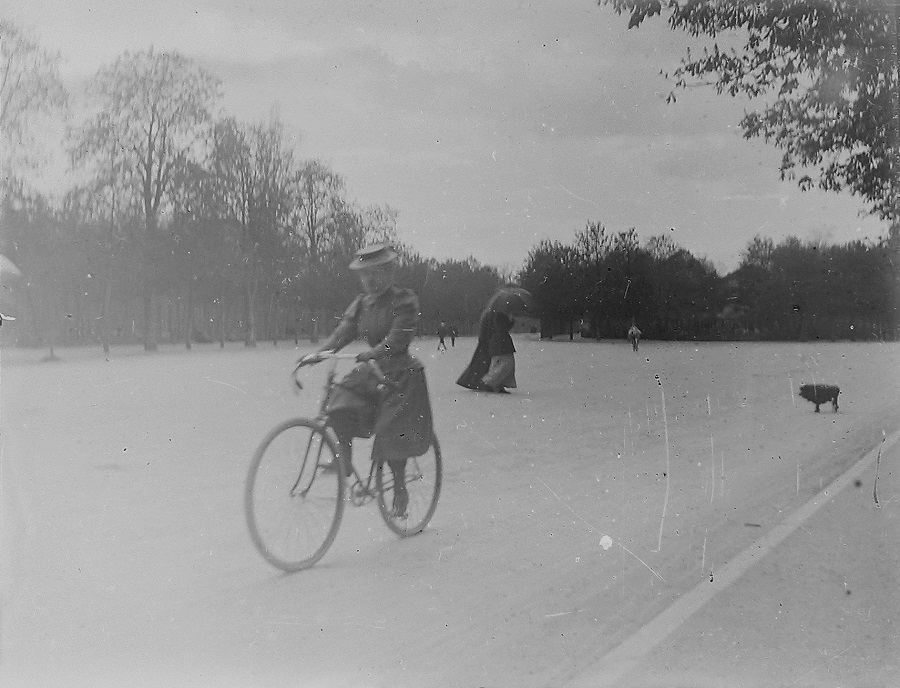 The P106 listing says this is Anna on her bicycle in Phoenix Park, Dublin.
It says c.1880 but that is impossible. Probably c.1895.
See larger and full size. Image 5866 in Humphrys glass negatives. Light-adjusted. See original.
See copy in [P106/326].
See other scan.
See other scan. 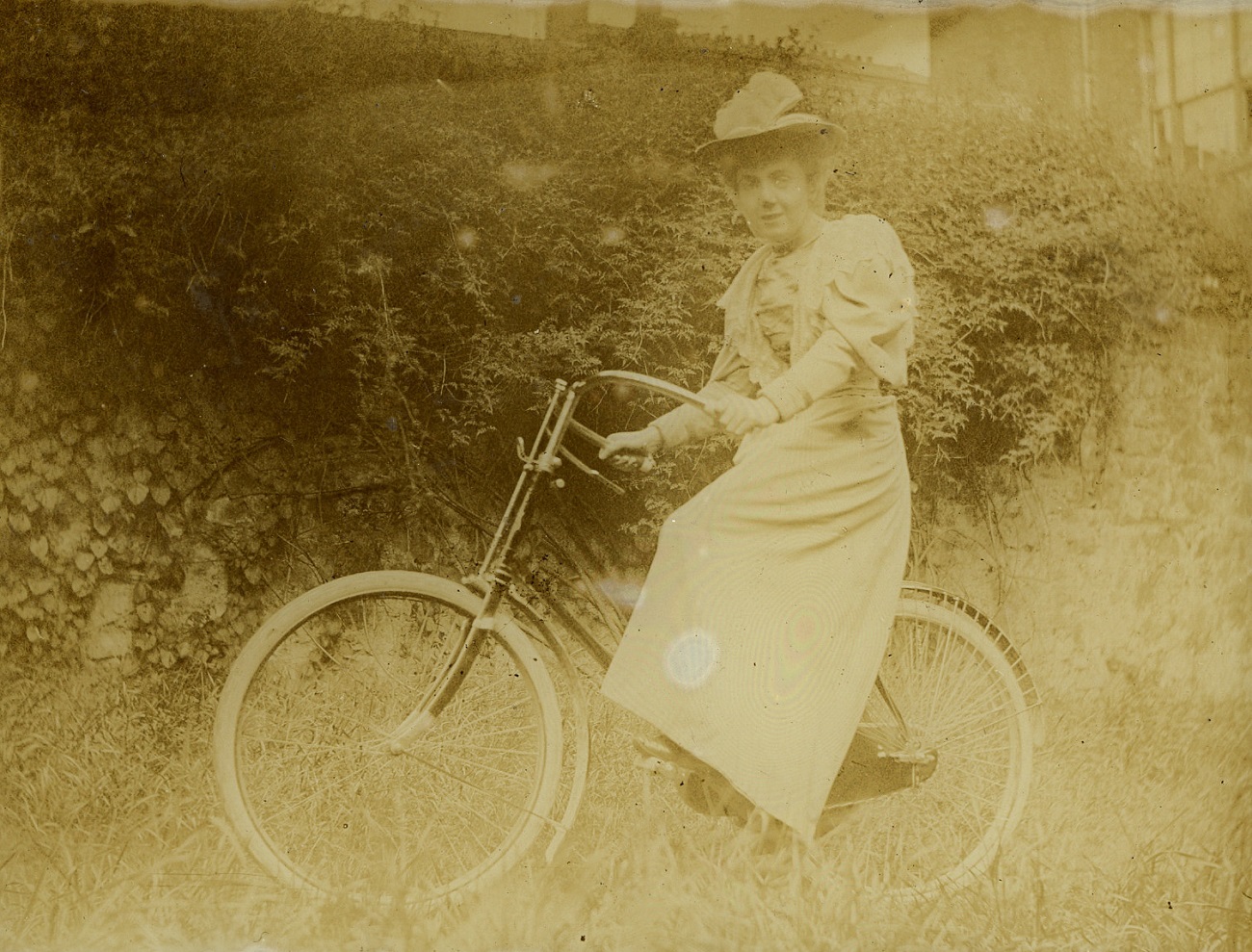 Anna, on bicycle, 1895.
This is [P106/301]. See larger and full size.
The back dates this as 1895.
The P106 listing (see photo) says Quinsborough, but too early for Quinsborough. And doesn't look like it.
See other scan.
See other copy. Image 5794 in Humphrys glass negatives. Light-adjusted. See original.
See other scan. 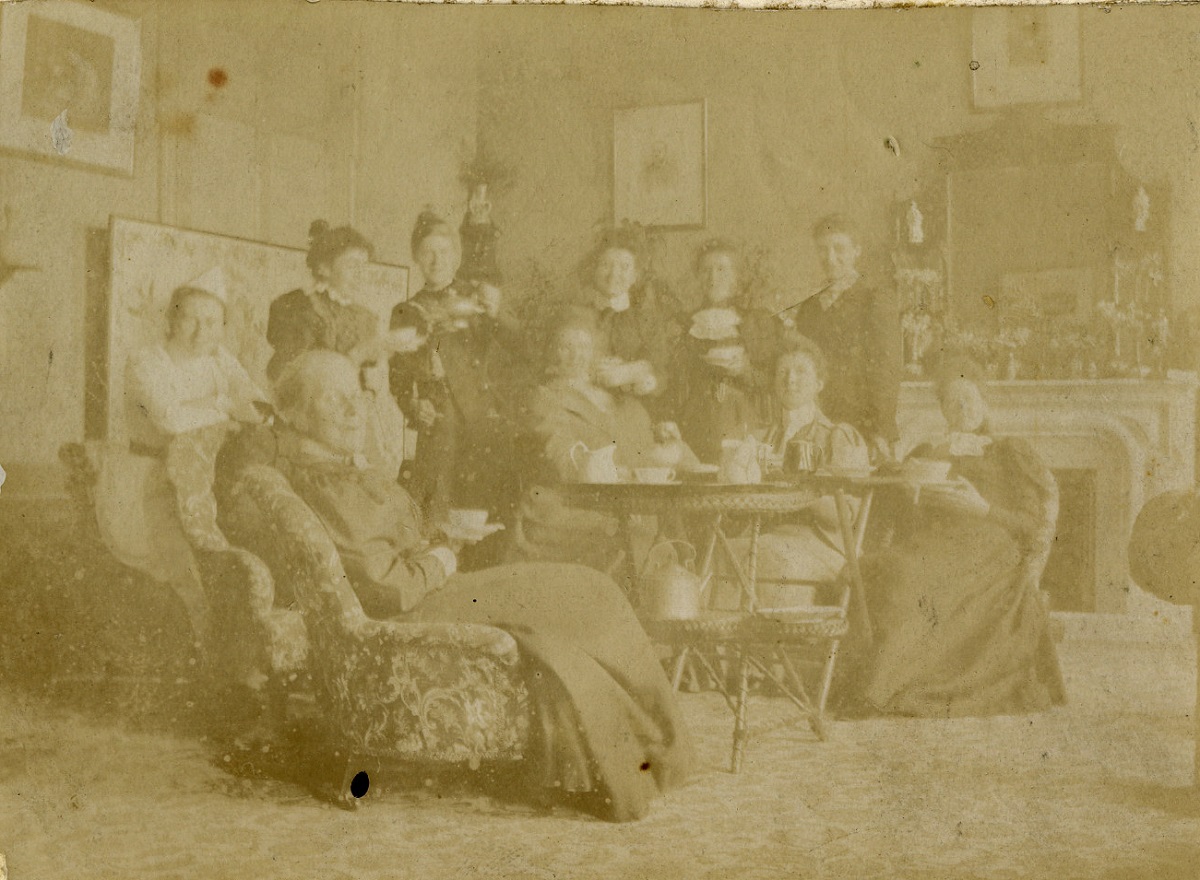 This is [P106/299].
Caption says Anna Rahilly (perhaps back, 2nd from left) and others.
Could front left be Ellen Mangan?
Caption says Quinsborough. Can this room be identified?
Photo would be c.1900.
See larger and full size. 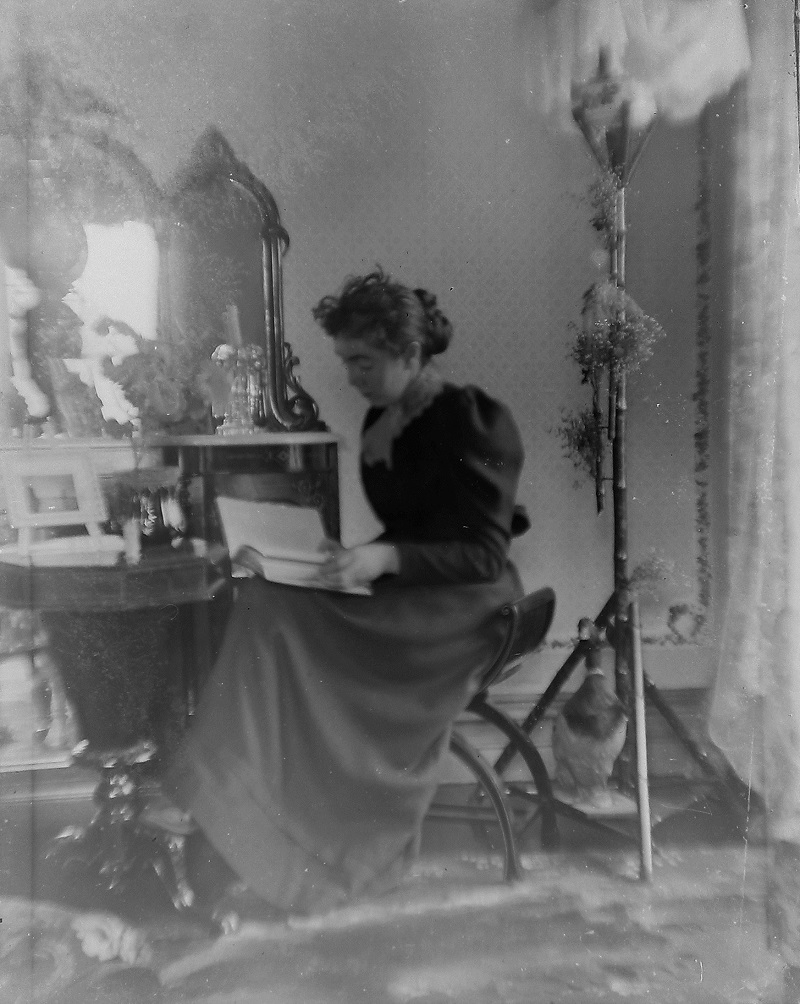 I had thought this is Nell.
But Cróine thinks it is Anno.
Photo c.1900.
Image 5754 in Humphrys glass negatives. See larger and full size.
Light-adjusted. See original.
See other copy. 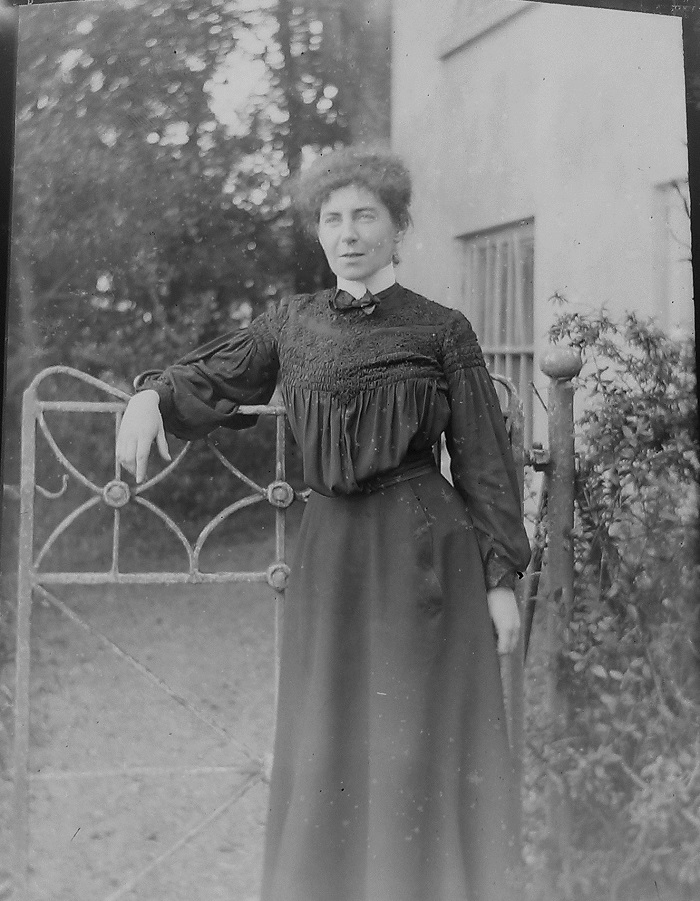 Think this is Anno, NOT Nell, c.1900.
Think this gate may be at the back of Quinsborough.
See larger and full size. Image 5819 in Humphrys glass negatives. Light-adjusted. See original.
See other copy. 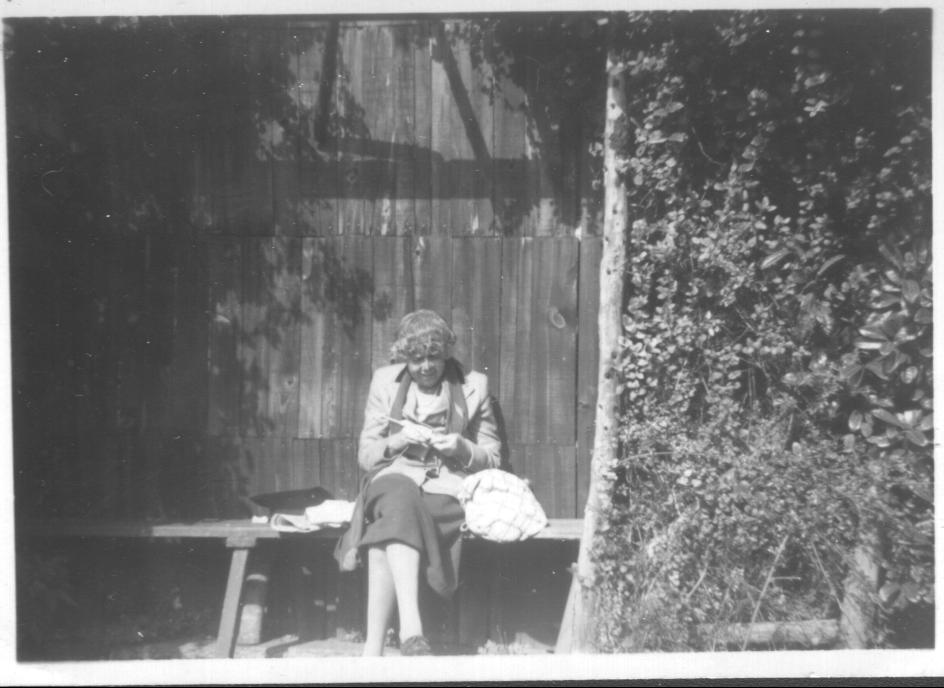