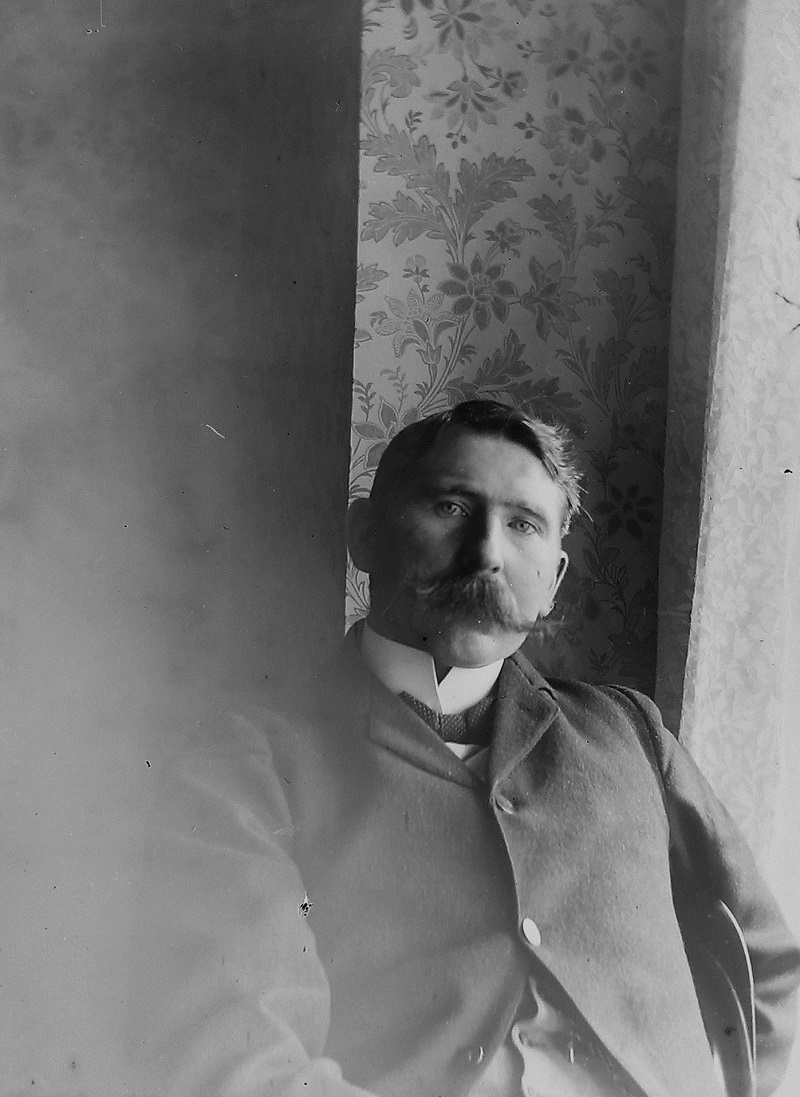 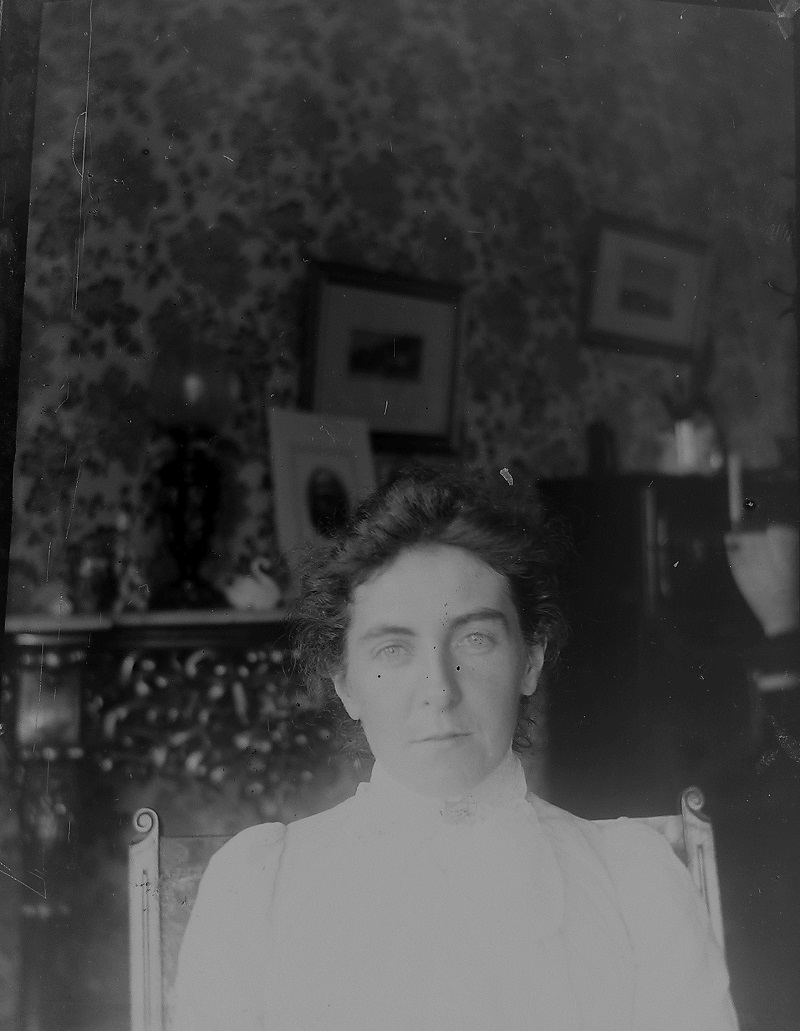 He adopted the spelling "Humphreys", sporadically at first, consistently by time of his death. It is not known why. He was the first from Glenstal to do so.
First clear appearance of the spelling is "Dr. Humphreys" in a Christmas card from him, 1894-95, from The Crescent, Limerick [P106/343].

David mar 20 Feb 1895 to Nell Rahilly [Mary Ellen, Ellen, born 27 Apr 1871].
He spelt his name "Humphrys" on marriage cert [GROI].
There is a gift, a clock "Presented to Dr.Humphreys by his friends in Limerick on the occasion of his marriage February 1895".
[Thoms, 1895] lists "David Humphrys", Workhouse, Limerick.
Spelt "Humphrys" in [Slater's street directory, 1895, 1896].
He sent a telegram 1898 from Limerick to Ballylongford to The O'Rahilly, who had won a horse race, "Congratulation from all, am proud of mare and trainer. Humphreys" [P102/39(5)]. See image. See shot from Cé a Chónaigh i mo Theachsa?
Nell's widowed mother and sister Anno moved to nearby Quinsborough House, Co.Clare 1898.
[Dermot Humphreys] said David and Anno used go out hunting from Quinsborough.
"Dr. Humphries" is at funeral of James O'Mara Apr 1899.
His will is dated 16 Dec 1899.
[Thom's, 1901] lists "David Humphreys" as Visiting Medical Officer, Limerick Union.

Nell and children carried on living Quinsborough with mother and Anno.
Her mother died Dec 1903. She and children and Anno lived there.
David's mother (the last grandparent) died 6 Feb 1909.
Nell left Quinsborough, moved to Dublin with children and Anno. Dick's diary [Mac Eoin, 1980] says they came to Dublin on 8 Mar 1909.
Stayed in Russell Hotel, Dublin, for very short time in 1909.
Then lived Pembroke Rd, Ballsbridge, for very short time in 1909.
Nell and Anno settled 54 Northumberland Rd, Ballsbridge. Listed there in St.Enda's accounts 1909.
Listed at 54 Northumberland Rd in [Thoms] 1910 to 1917.
Nell and Anno's brother The O'Rahilly returned to Ireland, and came to Dublin independently of his siblings, in May 1909.
Nell and family only settled a few weeks, May 1909, when the maid said "Mr.Brown to see you". Nell said "Who?" Sighle curious. It was The O'Rahilly, who had arrived from Philadelphia a day or two before [O'Rahilly, 1991]. [Sighle] recalled that she and the other children were delighted - they knew no one in Dublin, now had three American cousins to play with.
The O'Rahilly moved to 40 Herbert Park, Ballsbridge, 1910, close to Nell and Anno on Northumberland Rd. Nell's children grew up with O'Rahilly relations, not Humphrys.

Nell and Anno had a summer house at Muiríoch, Co.Kerry (in the Gaeltacht).
Like her brother The O'Rahilly, she made Irish the spoken language of her home.
Her will is dated 23 Jan 1939. Typed copy in [P106/459]. 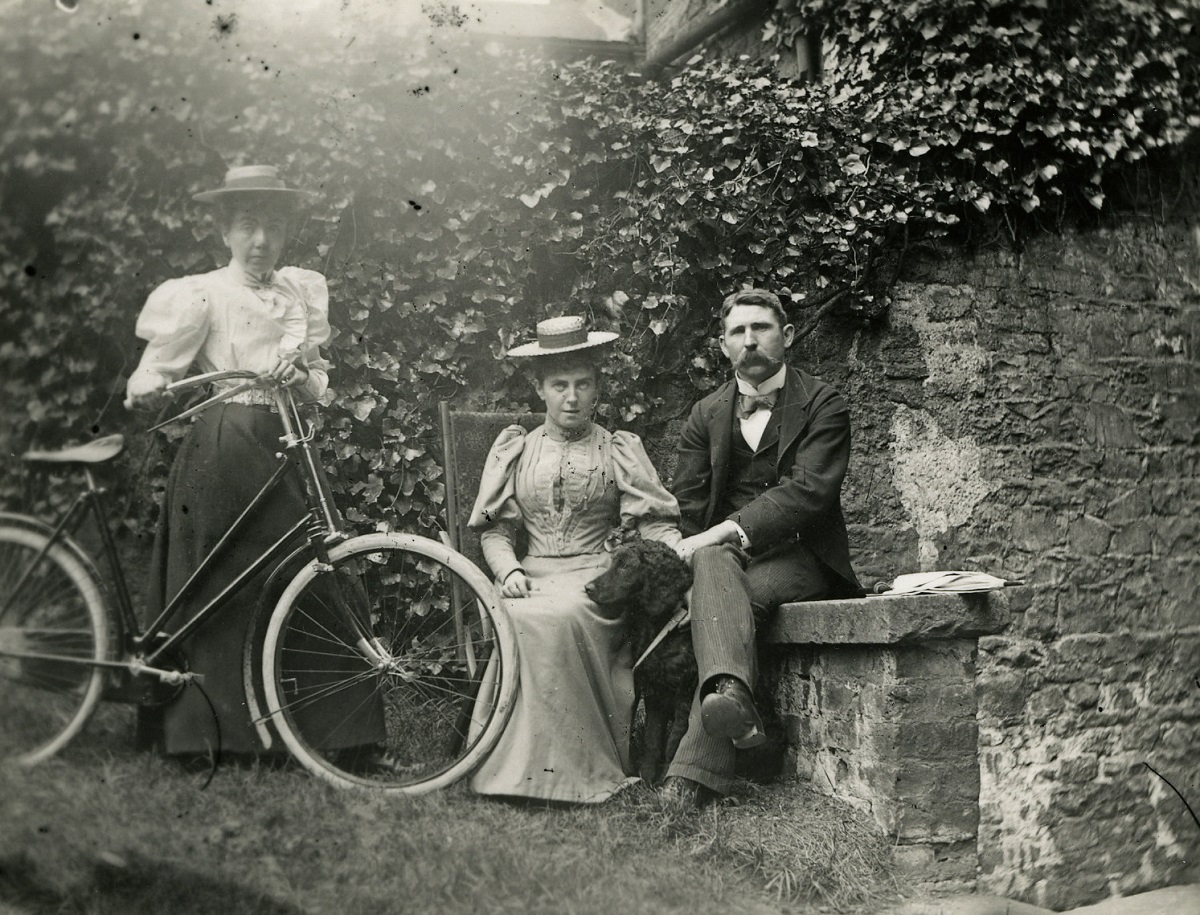 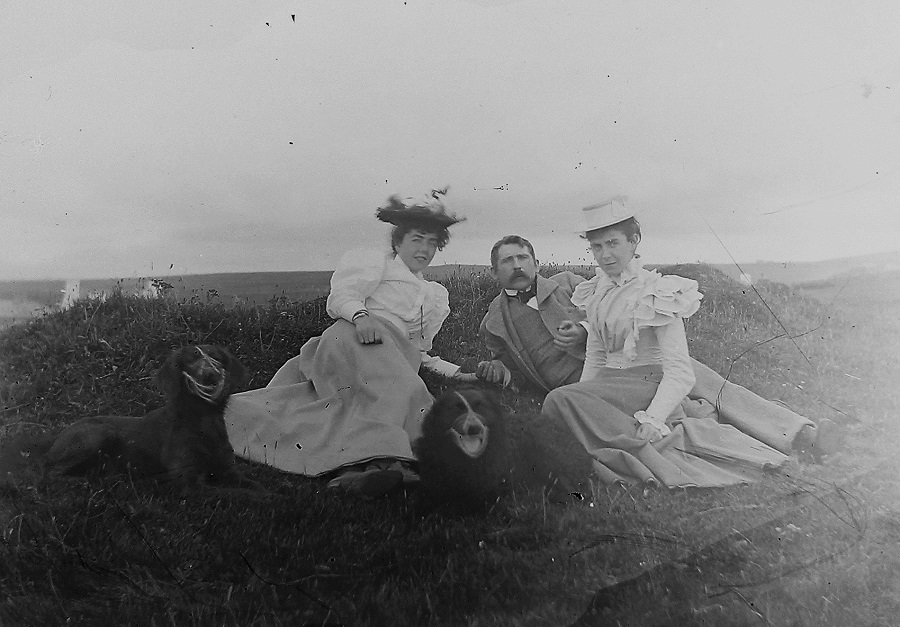 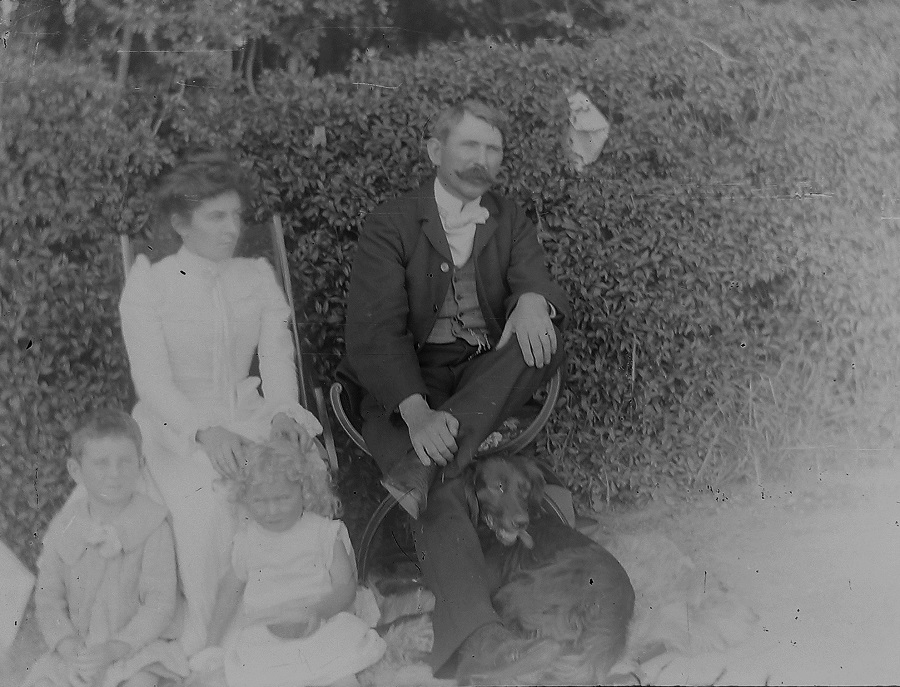 A cup won by Dr. David Humphreys with his horse "Jacob" at the Dublin Agricultural Show (Spring Show), RDS, Dublin, Apr 1897.
The show was held 20-23 Apr 1897.
[Irish Times, 23 Apr 1897] shows Dr. David and "Jacob" in a jumping competition on 22 Apr for cobs under 15 hands.
Irish Times does not however indicate that he won (or was placed). Yet this cup exists.
"M. Humphreys" of Dublin is found coming 2nd in another competition on same day, with the horse "Navan". This might be his brother Mick. 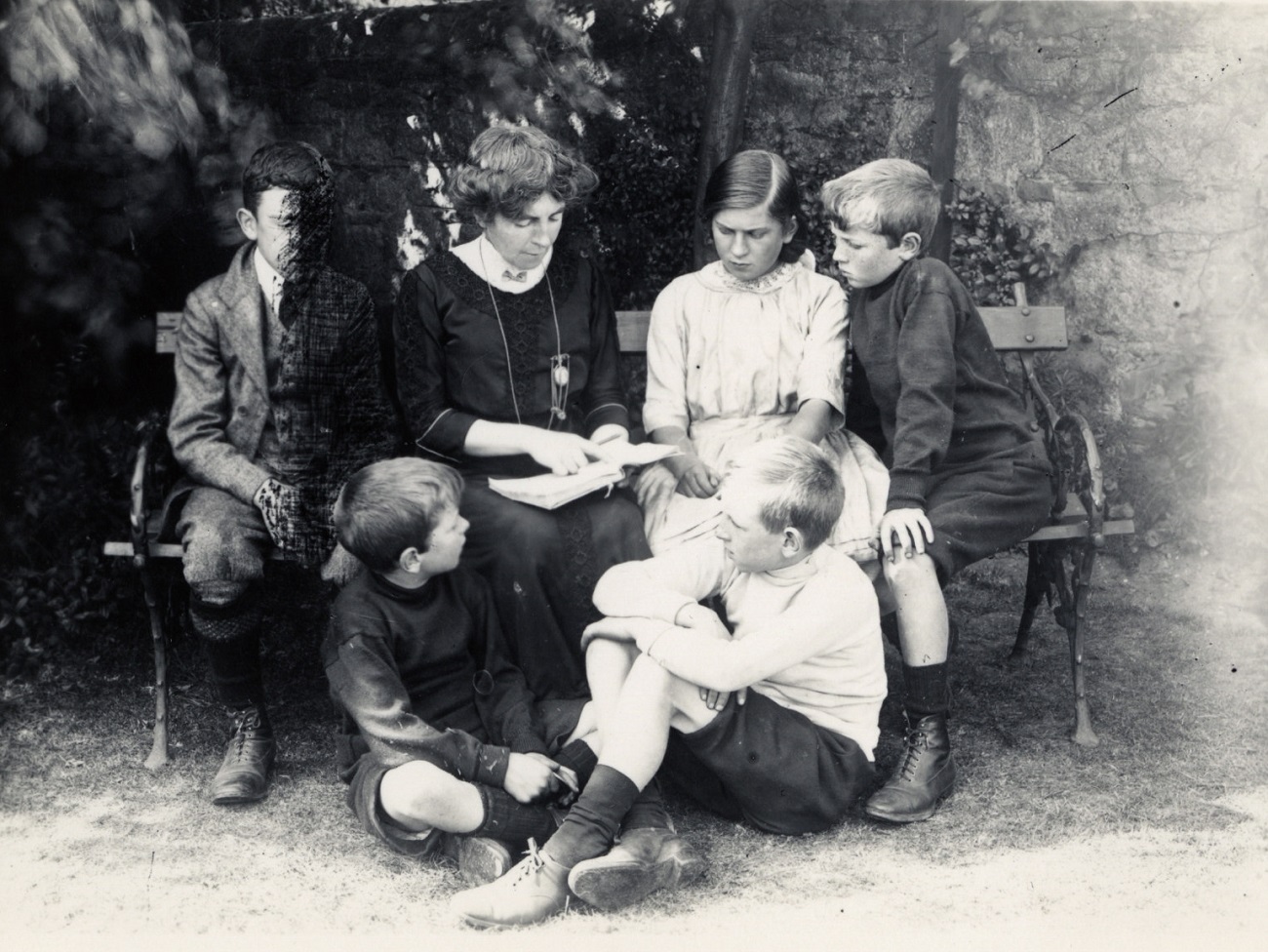 "One of my most bitter thoughts was - Would David be ashamed of me, making such a muddle of my life that I was in one prison and Dick in another?"
- Nell writing in May 1916 after 1916 Rising.

"To be honest I never had such an enjoyable time; not since I was at school, there were so many of us here together."
- Nell writing in Jan 1923 about Christmas 1922 in Mountjoy prison with all the other Republican women prisoners.