Note written by The O'Rahilly as he lay dying

The 1916 Rising leader The O'Rahilly was mortally wounded in action on the evening of 28 Apr 1916. It took him some hours to die.
He wrote a note to his wife as he lay dying in Sackville Lane (between Moore St and Moore Lane), Dublin, on the night of 28-29 Apr 1916.
In 1937, a plaque was erected at the site.
In the 1950s, Sackville Lane was re-named "O'Rahilly Parade" in his honour.
In 2005, a beautiful new plaque was erected at the site, featuring a copy of The O'Rahilly's dying note. 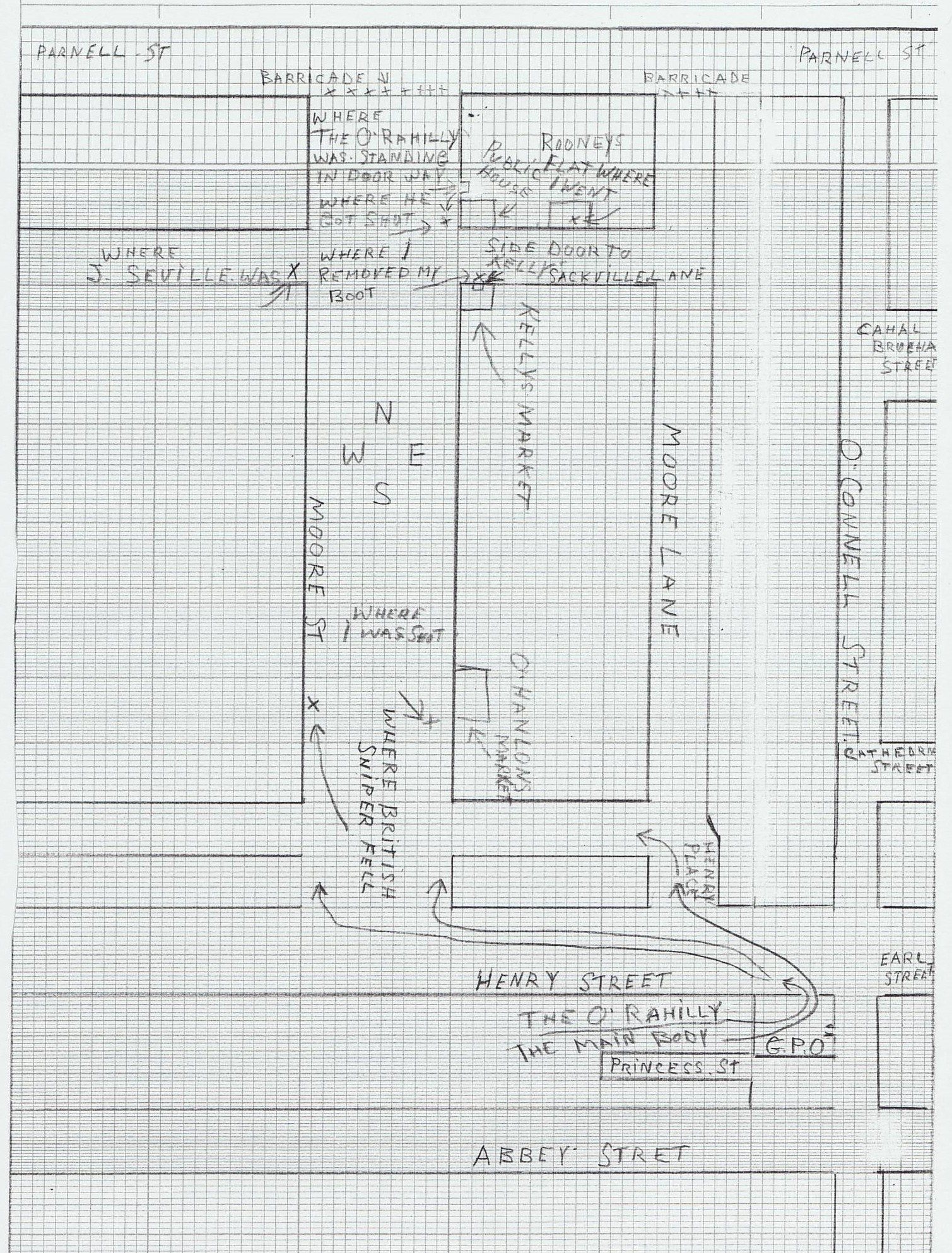 Postcard showing the British Army barricade at the top of Moore St that shot The O'Rahilly.
This barricade was at the junction of Moore St and Parnell Street.
See full size.
Postcard image from the site of the film A Terrible Beauty, which incorrectly labelled this the corner of Moore St and Henry St.

Simpson and Wallace butchers, 57 Parnell St, shown in [Thom's, 1914] at the junction of Parnell St and Moore St.
This confirms the location of the above photo.

This graphic on broadsheet.ie locates the picture at the wrong end of Moore St. 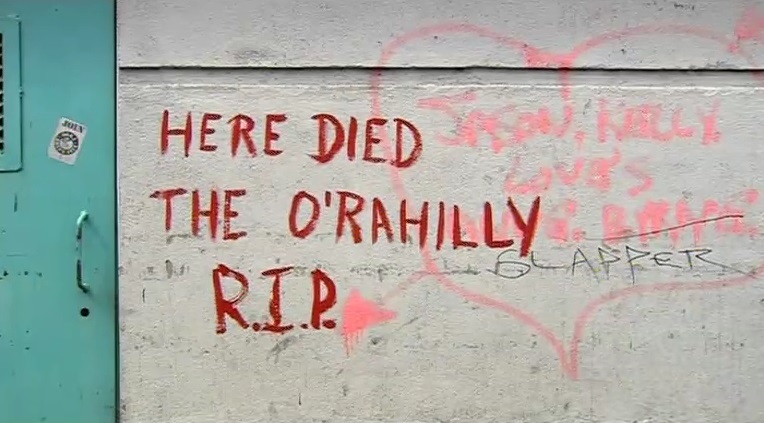 Before he died, The O'Rahilly dipped his finger in his own blood and wrote his name on the doorway beside his head.
Here Manchán Magan re-creates that for The Struggle (2003).
It is sometimes mistakenly said that the note to his wife was written in his blood, but that is not true.

Re-enactment in 2015 by Cabra Historical Society of the charge up Moore Street led by The O'Rahilly. 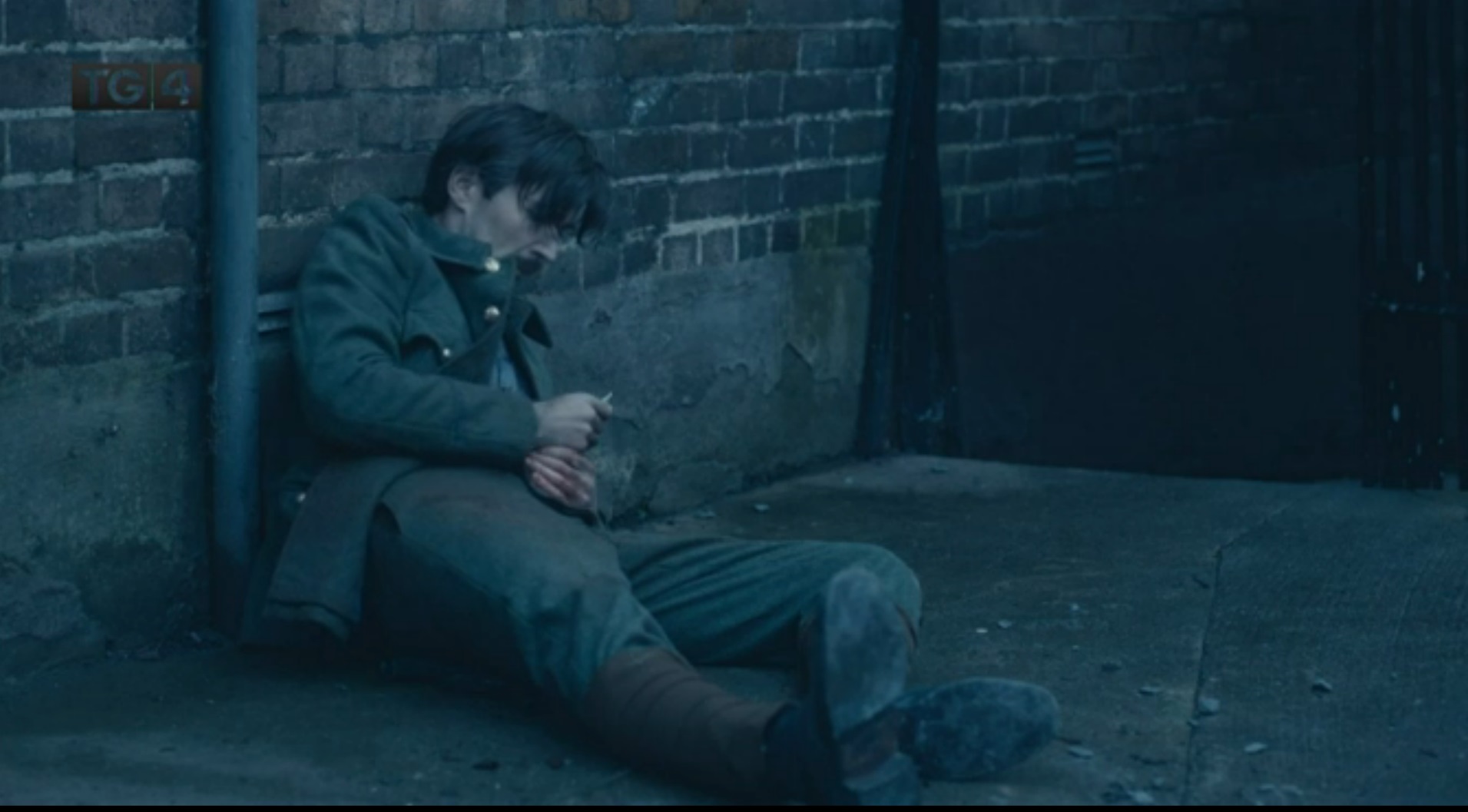 The death of The O'Rahilly, as portrayed by actor John McMahon in the TV drama-documentary "Cumann na mBan" (2015). 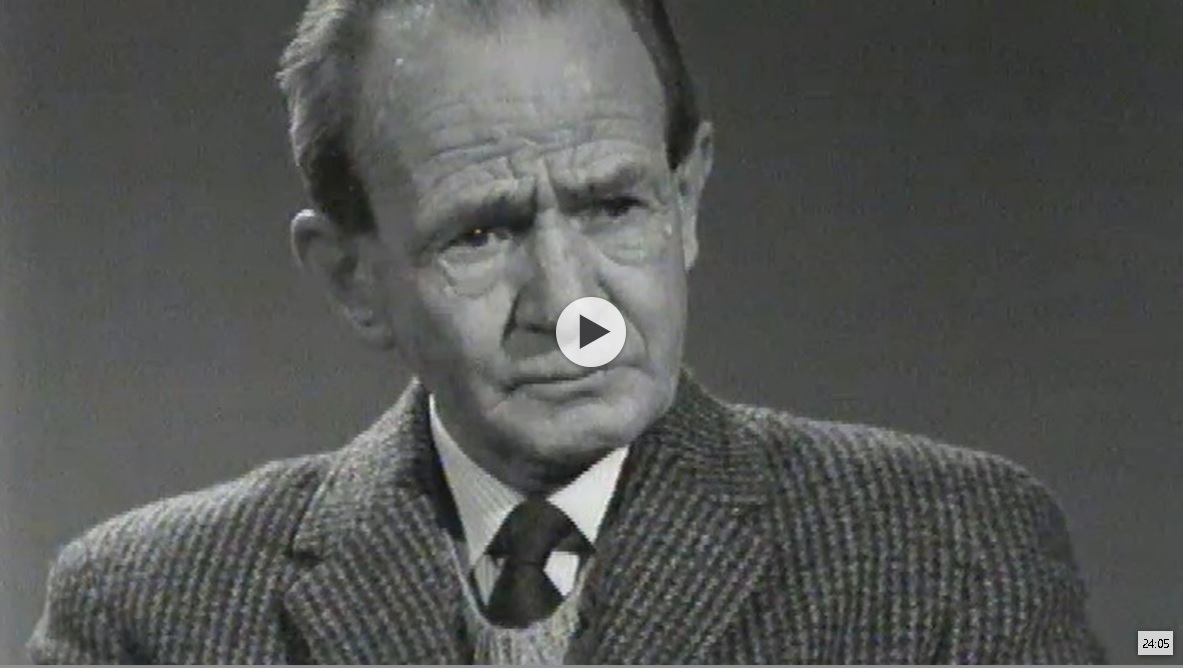 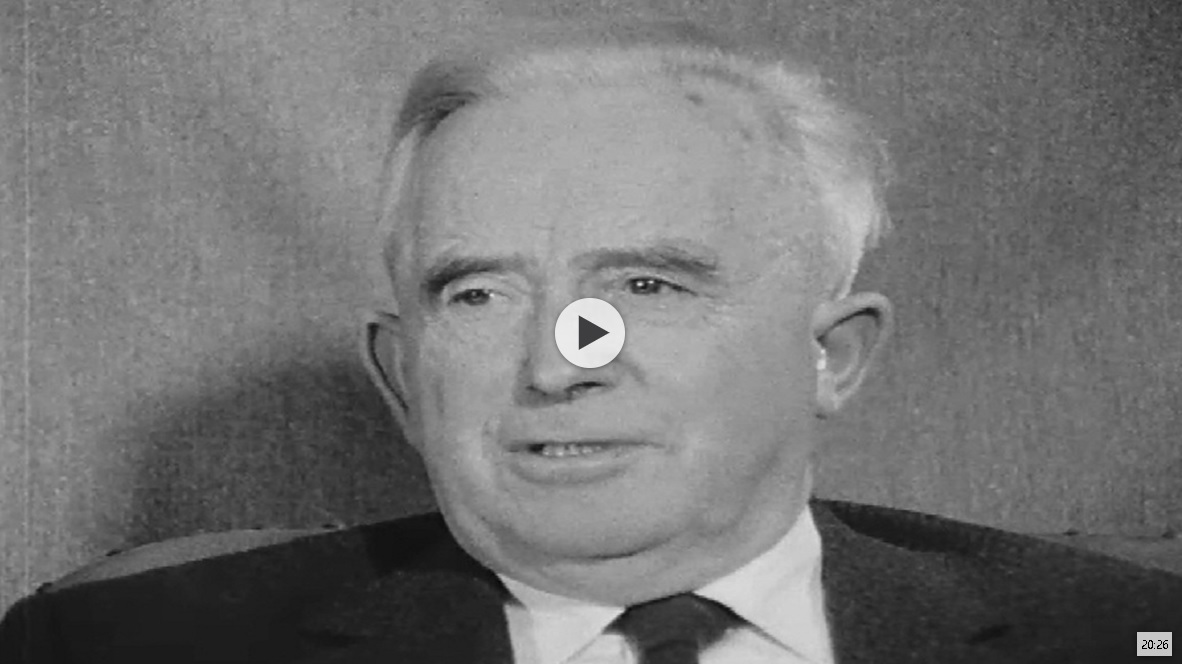 There was a plaque to The O'Rahilly at Sackville Lane (O'Rahilly Parade), on the wall of the pub on the corner.
It was erected on 25 April 1937. George Plunkett gave an oration.
The O'Rahilly and Humphreys families attended, as did Count Plunkett and Maud Gonne.

This area got very run down, and was redeveloped.
The pub was demolished in 2002-03 and the plaque removed.
A new building is now on the site.

A shot of the sign for O'Rahilly Parade appears in this video of Dublin in 1968.

The old plaque on the now-demolished building at the corner of Moore St (to the left) and O'Rahilly Parade (to the right).
Photo 1999.

The Dublin plaque was saved and is now in Cashel Folk Village, Cashel, Co.Tipperary.
The plaque inscription was originally in English. There were objections to this, so the plaque was taken down, reversed and the inscription carved in Irish on the other side. This Irish version was then put back up.
In Cashel Folk Village you can see both sides. See full size. See Irish side.
Photos 2017 from Margaret Ryan.

Detail from John Rocque's map of Dublin, 1757.
Shows Henry St, Moore St, Sackville Lane (not named), Great Britain St (Parnell St) and Sackville St (O'Connell St).
Note Sackville St does not extend down to the river yet (nor is there any bridge).


Plaque to The O'Rahilly, O'Rahilly Parade, Dublin, featuring the note he wrote as he lay dying in 1916.
Click to rotate.
From Google Street View.

Return to The O'Rahilly.
Donation Drive