Thomas Blennerhassett,
of Flimby Hall, Flimby, Cumberland (Cumbria).
MP for Carlisle 1584-1588. See list of Carlisle MPs 1558-1603.
Granted lands in Ireland:
He was granted lands in Ireland in 1590 by Sir Edward Denny, Governor of Kerry and Desmond, as part of the Munster Plantation.
He was granted the forfeited Desmond estate of Ballycarty, near Tralee, Co.Kerry.
See grant dated 14 Aug 1590.

Thomas visited Ireland, "at an advanced age".
Thomas and his son Robert appear in the petition of 1598 from early settlers who had to flee Kerry in the insurrection of 1598.
He returned to Cumberland, but his son Robert stayed in Kerry, and was ancestor of Blennerhassett there.
He had issue:

Similar note on p.VII (a different page) of the same.

Extract from claim of 1654 by Thomas' grandson John Blennerhassett about his family's lands in Co.Kerry.
He refers to the original 1590 grant of lands to his grandfather Thomas.
See full size.

Thomas and his son Robert appear in the petition of 1598 from early settlers who had to flee Kerry in the insurrection of 1598. 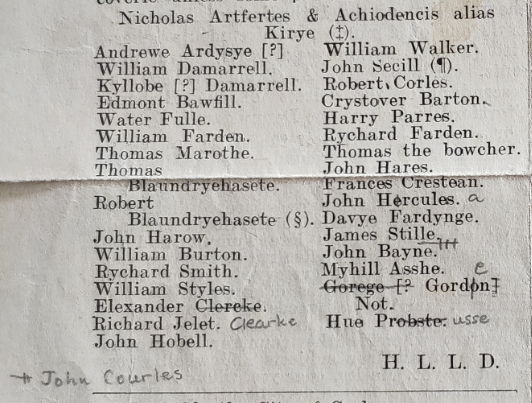 A reading of the signatures on the petition by Sir Henry Denny, 7th Baronet.
He notes that this is Thomas and Robert Blennerhassett, the first two settlers of that name in Kerry.