Jenkin Conway,
bapt 26 Sept 1577, London,
poss. descendant of Henry I.
His father came to Ireland in 1583.
His father was granted Killorglin, Co.Kerry, in 1587. And was also granted Innisfallen in Lough Leane near Killarney.

He (not his father) is apparently the "Jenkin Conway" who had the grant of Killorglin and Innisfallen confirmed by patent, 10 Oct 1613.
He built a new castle at Killorglin and re-named it Castle Conway.
He mar Avice Dalton [or Avis, of Knockmore, Co.Waterford].
Richard Boyle, 1st Earl of Cork wrote to him in 1632. See 1632 diary entry.
He was bur in the chapel at Castle Conway.
See his now-vanished tomb at Castle Conway.
Jenkin and Avice had issue:

Discussion of the above diary entry in [Hickson, 14 Apr 1897].
It is about the proposed match of Jenkin Conway's niece Elizabeth Roe with James Conway.

There was an inscription on the Conway-Blennerhassett tomb at Castle Conway, erected after 1732.
This recalled Jenkin and Edward Conway, grandfather and father of Avice Conway: "Jenkin et Edwardus Conway". 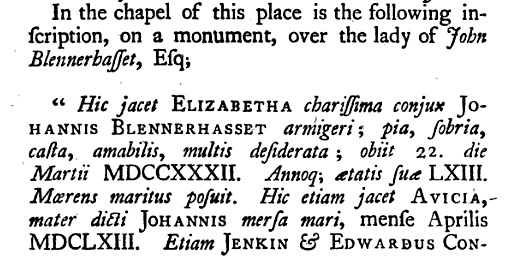