Thomas Fitzwilliam, 1st Viscount Fitzwilliam,
of Merrion,
born 1581, Catholic.
See wikipedia and genealogics.
His father died 1595. He succ to Merrion Castle.
He entered Gray's Inn in London as a law student c.1602.
See the "riding of the bounds" of Dublin in 1603.

He mar 23 Aug 1605 to Margaret Plunkett [descendant of Edward I].
Knighted 23 Aug 1608.
[Ball, vol.2, 1903] tells of an incident in 1608 when the Lord Deputy's messenger delivered an order to the hall door of Merrion Castle, "and how on returning to town he met Lord Fitzwilliam at the cross roads at St. Stephen's Green riding home with his wife and eight attendants".
Sheriff of Co.Dublin 1609.
He was cr Baron Fitzwilliam of Thorncastle and Viscount Fitzwilliam of Merrion on 5 Aug 1629 by Charles I. Letters patent is in Wilton House.
Took his seat in the Irish House of Lords 14 July 1634.

[Down Survey, 1655-58] shows Lord Fitzwilliam of Merrion, Irish Papist, as owner of Merrion and Simmonscourt and Owenstown. This refers to him rather than his son since his son is referred to as Col. Oliver Fitzwilliam.
He died c.1655, age c.74 yrs.
1st Viscount and Margaret had issue:

Identified in [Ball, vol.2, 1903] as 1st Viscount, by Cornelius Johnson.
But Fitzwilliam Museum now says "Portrait of a man" by unknown.
Portrait c.1625.
Used here with the kind permission of the Fitzwilliam Museum, Cambridge.

Identified in [Ball, vol.2, 1903] as Margaret Plunkett, by Cornelius Johnson.
But Fitzwilliam Museum now says "Portrait of a woman" by unknown.
Portrait c.1625.
Used here with the kind permission of the Fitzwilliam Museum, Cambridge.

Dublin city officials rode in procession around the bounds of the city in 1603.
When they came to Merrion Castle, the seat of Thomas Fitzwilliam (not yet Viscount), they discovered that the path through the grounds of Merrion Castle, formerly passable, was now blocked. They rode around it.

Dublin city officials ride in procession around the bounds of the city in 1603.
They rode to Merrion chapel.
They then came to the grounds of Merrion Castle. They arrived at "the south-west corner of the orchard ditch of Merrion, through which corner the elder [fathers] of the city said that of old time they did ride. And now for that the same was so strongly fenced with trees and thorns, which, in favour of the gentleman of the house of Merrion [Thomas Fitzwilliam], being the city tenant, they would loathly break down, they rode a little besides it".

Gray's Inn has been repeatedly re-built since Fitzwilliam's time.
It had to be re-built after bombing in WW2.
See satellite view. 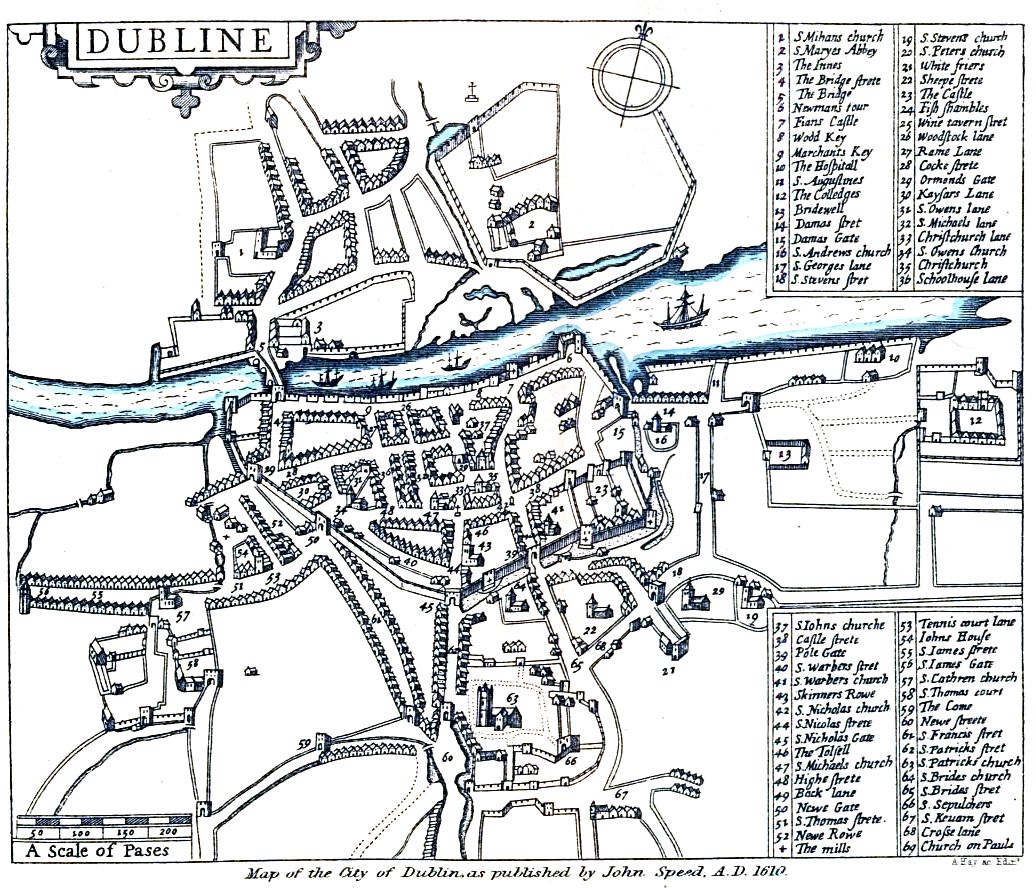 Copy of Speed's 1610 map that appears as an insert on John Rocque's map of Dublin, 1757.
This map is an insert in Dublin Bay on Rocque's map.
Confusingly, he overlays it with the depth figures he notes for the water, which all have a dot after them.
See larger.