The Free State raid on Ailesbury Rd in the Civil War, Nov 1922

The raid as reported in a newspaper.
See full size.
See other version.

In the Civil War (June 1922 - May 1923), the Humphreys family - especially Sighle Humphreys, Emmet Humphreys and Anno O'Rahilly - took the Republican (anti-Treaty) side.

Dick Humphreys, who had fought the British in the 1916 Rising, did not want to fight fellow Irishmen and took no part in the Civil War.

In Sept 1922, Nell Humphreys allowed Ernie O'Malley, the IRA Assistant Chief of Staff, age 25, to use their house, 36 Ailesbury Rd, as a safe house from which to co-ordinate the Republican war against the new Free State.
The house was in effect the headquarters of the IRA.
Ailesbury Rd had been used as a safe house in the War of Independence against the British (1919-21), and contained a secret room.
Unfortunately for the Humphreys family and O'Malley, the Irish side were aware of the existence of this room.

At about 7.30 am on Sat 4th Nov 1922, Free State troops raided the house.
Nell, Anno and Sighle were present. Emmet was in prison.
Dick was present, but, not wanting any part in the Civil War, stayed in his room during the raid.

When the Free Staters knocked on the door, Sighle went to the secret room (upstairs) and warned Ernie O'Malley, who armed himself.
The Free Staters came in, went straight up to outside the secret room. The court case said they had been given knowledge of its existence. They tapped on walls looking for how to find their way in.
As they started breaking in, Ernie fired and fought his way out. The Free Staters pulled back.
Ernie saw a face and fired: "I saw a chin edged out from a door. Another of them, I thought as I fired" [O'Malley, 1978]. But it was Anno. He had shot Anno in the face. She was badly injured (but would survive). Sighle says: "the bullet had passed through her mouth and out of the back of her head" [P106/978(1)].
He was horrified. Nell told him not to bother but to get out.

After Ernie's firing, the Free Staters had fled downstairs, abandoning weapons.
He threw a grenade downstairs. They scattered, but it was defective and did not explode [O'Malley, 1978].
The Free Staters were now outside, and Ernie exchanged fire with them from the window. (This is meant to be when the Free State soldier was shot dead.)
They shouted for him to surrender. "Never! No surrender here!" he shouted.
There was a siege for a short time.
Nell tried to leave to get medical help for Anno, but was fired on and had to go back in.
Ernie decided he had to make a run for it. He ran out the back door, but was gunned down outside the house, and seriously injured. He struggled to the back door and collapsed. He was surrounded by Free Staters, and the skirmish was over.

A Free State soldier, Peter McCartney, was shot dead in the exchange.
The official story was that it was Ernie O'Malley who shot him. But there have always been rumours that it was Sighle who shot out a window and killed him. See [Fox, 1938]. She always denied this.
Ernie in [O'Malley, 1978] says the Free Stater was killed when he was firing at them from the window before he exited the house. That is, Ernie seems to admit he killed him.
Sighle admits in [P106/978(1)] and [P106/1991] that, after Ernie left the house, she picked up a gun and fired at the Free Staters, but says "I didn't hit anyone".
She says in [P106/1991] that the soldier was shot before Ernie left the house: "Outside the front door there was a poor soldier lying apparently dead."
[Irish Times, November 6, 1922] already says that a young woman picked up a gun and fired on the Free Staters.
The court case says Sighle fired repeatedly at the Free Staters. But says it was O'Malley who killed the soldier. He was tried for murder.
Manchan Magan in The Struggle explores whether the soldier was killed by Ernie, or by Sighle, or by friendly fire. But no real conclusion can be drawn.
There is no hint in Sighle's prison memoirs that Ernie is taking the blame for her action.
If she did kill the soldier, would she be the only woman to have killed anyone in the entire Civil War?

Some of the men thought Dick was Eamon de Valera.
Dick was taken out of the house, put against a tree, and told he would be shot. See [P106/978(1)] and [P106/1991].
Another of the men put a gun in Sighle's mouth to force her to reveal where guns were.
Manchan Magan at the end of The Struggle points out how the raid could have gone differently. His existence (and mine) hung by a thread that morning.

Ernie and Anno were taken for medical treatment and imprisonment.
Nell and Sighle were arrested and imprisoned.
Nancy O'Rahilly came up from 40 Herbert Park, which was also being raided, and she was also arrested.
Sighle in [Mac Eoin, 1980] says Dick was also arrested, but he was not held for long.
A servant of the house next door, 38 Ailesbury Rd, called Ellen Flanagan, was injured by a bullet.

[French Embassy history] says about Anno: "As Miss O'Rahilly was being carried away on a stretcher, she managed to whisper to the maid: "there is money behind the curtain in my room; give it to the first person who calls". It was a sum of thousands of pounds, and was the entire resources of the Prisoners' Dependence Fund, of which Miss O'Rahilly was treasurer. The first person to call was the bread man, and when he had handed in his bread, the maid thrust on him this large sum of money in notes. Although the bread man was not involved in the movement and his wages at the time would not have been more than £2 a week, he gave back the money without a penny missing."

Ernie O'Malley spent the rest of the Civil War in prison, recovering from his serious injuries.
He was charged with murdering a Free State soldier and would likely have been executed. But his doctor insisted he was too ill, and shooting him would be like shooting Connolly. He thus avoiding almost certain execution.
The Civil War ended May 1923. He was one of the last prisoners to be released, released 17th July 1924.

The French Embassy said that after the raid: "the house's cover was blown, and for the rest of the Civil War it was the most raided house in Dublin". Though this seems unlikely since nothing would have been happening there for the rest of the Civil War. (The whole family were in jail.)
Nell's obituary in 1939 said it was the most-raided house in Dublin in the years after the Civil War, which makes more sense. (After 1923, Sighle continued to oppose the Free State, and the house was raided repeatedly until at least 1931.) 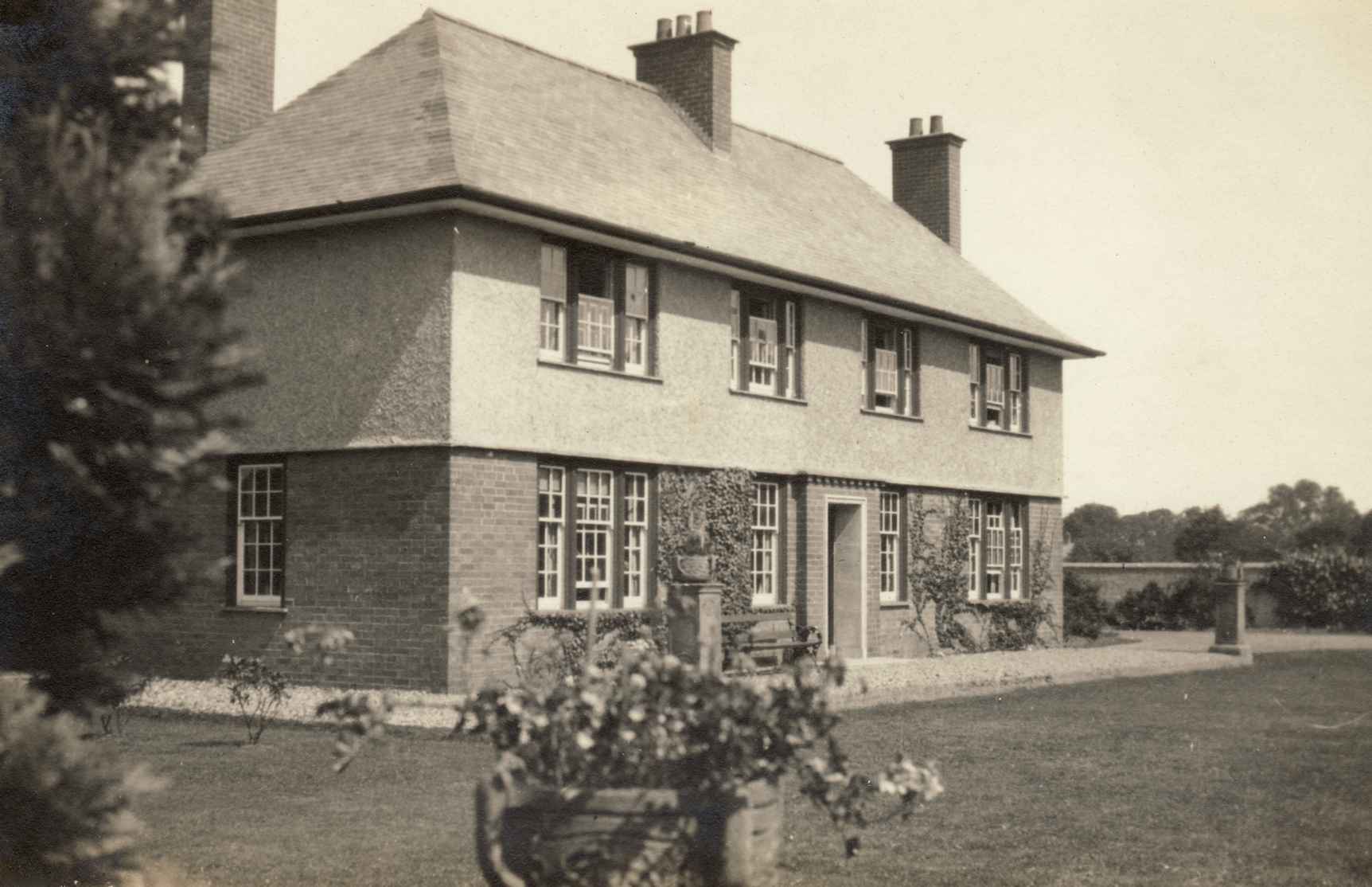 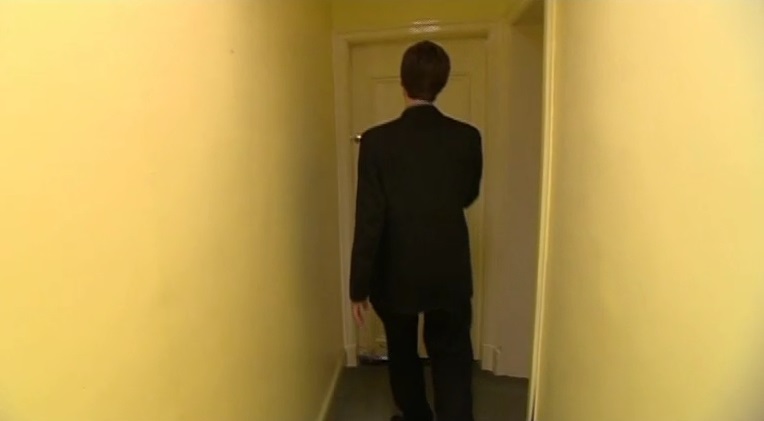 Manchán Magan shows location of the secret room in The Struggle (2003).
Upstairs, go to back, turn left down corridor.
At end of corridor there was a false wall, secret room behind it. (Now just a normal door into the room.)
[French Embassy history, pre-2004] says the secret room was "in what is now the washroom". But this might be out of date since Manchán above shows the room being now used as an office. 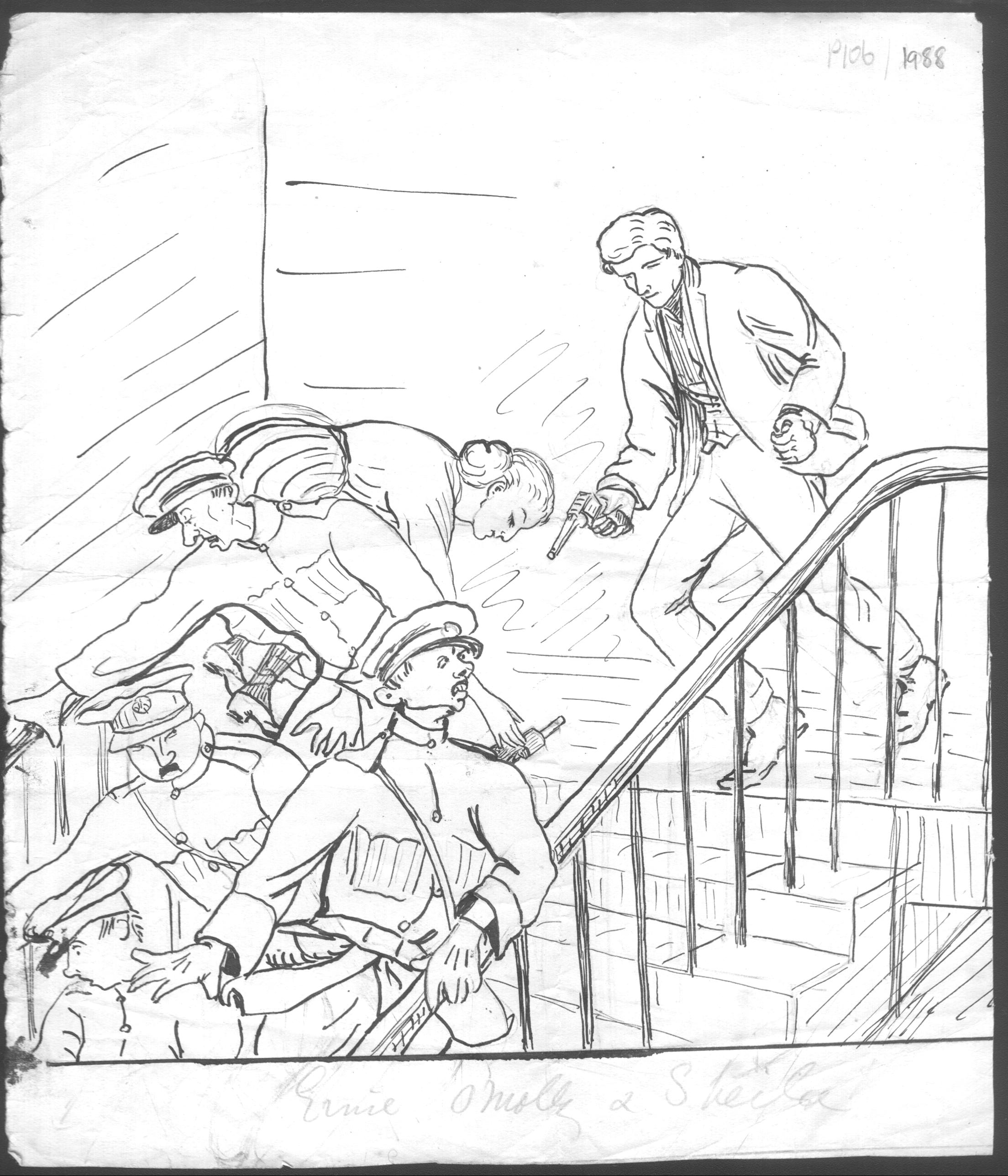