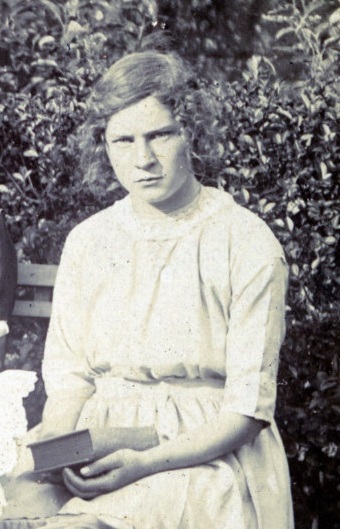 Sighle, shortly before the 1916 Rising.
From here.

They mar at Donnybrook Church, Dublin [GROI]. NOT 1937.
He was member of IRA Army Council and editor of An Phoblacht.
(todo) See newspaper notice in [P106/896]. (todo) See [P106/900] which apparently says it was 19 Feb.
Sighle after marriage went as "Sighle Bean Domhnaill O Donnchadha" or "Sighle Bean Uí Dhonnchadha".

Papers to be consulted - NAI Dept of Taoiseach files

Other papers to be consulted

"you could go to confession alright ... but you only had a sporting chance of receiving absolution. ... the priest asked you what you were in jail for? ... in nearly every case a long discussion followed and ended by the Priest saying that unless you were willing to obey the Bishops ruling - through their Pastoral - he couldn't give absolution. ... I never could feel antagonistic towards the priests for their action that time, as they had to obey the Bishops. ... Of course I do think there was no need for the priests to ask a person what they were in jail for; if they mentioned something political, then they brought it on themselves, and if they considered it a sin well then, they shouldn't be in the movement and should give it up. But if I sent all the F.S. Cabinet to glory during hostilities, I believe it would be a meritorious action."
- Sighle in [P106/979(1)] describes being in prison in 1922 in the Civil War. She says the prison chaplains would not give them absolution unless they renounced the Republican cause. She has no moral doubts about the cause, e.g. about the Free State Cabinet being a legitimate target.


"'Hope springs eternal,' and until the prison gate is finally closed behind one, one never despairs. ... Usually one almost prays for an accident or break-down or any miracle which might offer some means of escape. One envies the passers-by and wonders at the many who look so gloomy, one feels like asking them what they are so sad about when they have the most precious thing in the world - freedom. But then again have they freedom? Under this rotten government and rotten social system, who has freedom? A handful of capitalists!"
- Sighle writing in 1928 or more likely in 1931 about jail and freedom. From [P106/978(1)].

On the other hand, Sighle amusingly recalls that at one point in early 1923 in Mountjoy, prison was not so bad:
"As to service, we lived in a state of luxury that we shall probably never again enjoy in this world. Everything was done for us. The only exertion of our day was lifting the fork to our mouths at dinner ... Our mornings are worth describing. ... the wardress unlocked the door .. to tell us that our baths were ready. All my life while I enjoyed the pleasures of home and freedom I had to begin the day, summer and winter, with a dreaded cold bath. Now that I was "suffering in prison", I began the day with a full hot bath - too hot very often. After our baths we found our breakfasts waiting for us on a table before a blazing fire. ... by 9.30 a.m. we were absolutely and entirely free to do nothing for the rest of the day. If physical comfort is all that is necessary to constitute happiness we should have been the happiest individuals on the face of the earth. But instead of enjoying our state of luxury, as sensible individuals would have done, we looked around for and sought out causes to grouse about."
- Sighle in [P106/979(1)].


"I've long ago forgiven Cosgrave and Co. for all their murders (I'm sure they appreciate my forgiveness!!) I might be able to make myself forget that 8th December morning; but is one expected to forget that "Ireland" no longer exists, we are now a Dominion styled "Irish Free State", forget that Ulster, with its Benburb, its Cave Hill is no longer ours; forget that the Gaeltacht is all but dead; that the youth of the country have become wild geese, that - and exaggerated as this may seem its true - outside a very small band of Republicans who are living rebels to the existing ruling government (the I.R. Government exists but chiefly in our hearts) there is no one left in the country except those who are dependent in some way on the F.S. Government, the aged, and the very young. Are we honestly expected to forget these things?"
- Sighle in [P106/979(1)].