He was educ Crescent College, Limerick, 1882-1888.
Obituary thought he was educ Christian Brothers, Limerick, but think this is not true.
He was educ Clongowes, Co.Kildare. School register says he was there 1888-92.
He went up to Clongowes with his older brother James in 1888. Letter of 28 Aug 1888 talks of bringing "the boys" to Clongowes.
He was in The O'Rahilly's class [Bourke, 1967].

Paddy joins the Jesuits, 1892:
His father Stephen in letter of 18 May 1892 talks of Paddy considering going for the priesthood. To his wife he says: "We will both try to lead better lives that God may not think us entirely unworthy of having a son a priest." In letter of 19 May 1892 Stephen says to his wife: "I have read Paddy's letter most carefully and I am glad to think I do not share your doubts about his ultimate decision."
Paddy joined the Jesuits in 1892. Entered St Stanislaus College, Tullabeg, County Offaly, Aug 1892. [1967 short biography] thought it was 16 Aug 1892. Though another source thought it was 14 Aug 1892.
He studied philosophy at Ignatius College, at Valkenburg, Holland, 1895 to 1898. The college opened in 1894. Most students were German Jesuits who were banished from Germany.

In 1898 he went to Xavier College, Melbourne, Australia, to teach mathematics.
He wrote a mathematics textbook used in schools in Australia, Reasoned Methods in Arithmetic and Algebra for Matriculation Candidates (1903). The success of his book is mentioned in letter of 1904. See J/552/59.
Letters show Fr. Paddy is still in Australia in 1904.
[Lavelle, 1961] describes him as "a Jesuit scholastic in Australia".
Obituary says he was at Xavier College until 1905.

He returned to Ireland. He studied for the priesthood at Milltown Park, Dublin.
He was ordained 26 July 1908 at Milltown Park, Dublin by Archbishop William Joseph Walsh, according to [1958 article] and [1967 biography]. NOT Aug 1907.
He taught mathematics and physics at Mungret College, Limerick, for 3 years.
Professed on 2 February 1911.
He worked on missions round Ireland before WWI.
He wrote a booklet called Careers for Girls, which sold very well.
Rathfarnham Castle was bought in 1913 by the Jesuits. Paddy was part of the founding community.
He is listed with address with Jesuits at Rathfarnham Castle in [Thom's, 1914] and [Thom's, 1917].

In 1919 he returned to Rathfarnham. He worked on missions round Ireland for years.
He is listed with Jesuits at Rathfarnham Castle in [Thom's, 1926].

He left Dublin for a few years to become Rector of Crescent College, Limerick, 1931-1934.
In 1934 he returned to St.Francis Xavier's.
He conducted the popular "Public Holy Hour" at St.Francis Xavier's for many years.
Author of four booklets on the Holy Hour, which sold in vast numbers. In particular his pamphlet An Hour With Jesus and the companion book Another Hour with Jesus. See photo and photo of booklets in P133/2/17A.
He was in charge of Children of Mary Sodality at Sion Hill convent (and school), Blackrock, and Children of Mary Sodality at St.Francis Xavier's.
He was at Nell's funeral 1939.

[Muffie de Courcy] told a story about him. At the end of mass he would always ask the people to "say a prayer for my mother" (his mother died 1910). Years later, attending a dying man, gave him last rites, asked him to "say a prayer for my mother". After he left, the dying man turned to his wife and said: "Gosh, I thought Fr. O'Mara was going to ask me to bring a parcel to his mother".

See 1958 article on his "Sacerdotal Golden Jubilee" (50th anniversary of ordination).
He sold an enormous number of copies of his booklets. Letter of 18 Mar 1965 says he has sold 2 million copies of his booklets.
Obituary says: "Until he was into his nineties, his appearance never changed. His abundant black hair was only slightly touched with grey, and he could have been taken for a well-preserved man in the late sixties."
In Aug 1967 he celebrated 75 years in the Jesuit order. See 1967 short biography. See 1967 article. This says his pamphlets have sold over 1 million copies.

Death, 1969:
Letter of 30 Dec 1968 says he is now in a Hospice.
He was the oldest Jesuit in Ireland at his death.
He died Our Lady's Hospice, Harold's Cross, Dublin, 23 Mar 1969, age 94 yrs [GROI].
He was bur in the Jesuit plot of Glasnevin Cemetery, Dublin.
Some of his papers survive with the Jesuits. See Fr. Paddy O'Mara papers.
An Hour With Jesus is still reprinted today. 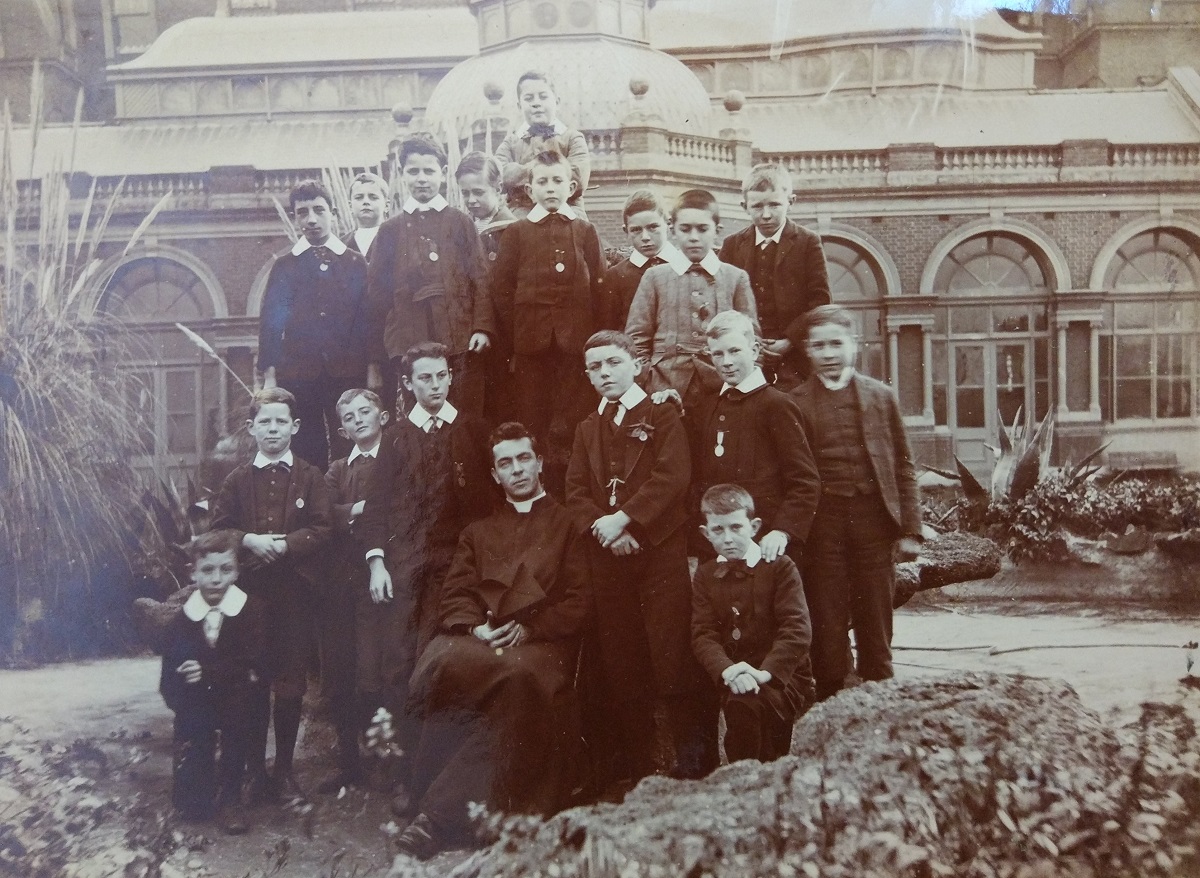 In Aug 1918, with the Germans in retreat, Fr. Paddy and other Catholic chaplains and soldiers were given leave to go on a pilgrimage to Lourdes on the other side of France. See [O'Connell, 2014].
This photo shows the group at the Rosary Basilica in Lourdes on 6 Sept 1918. 3 chaplains in 2nd row. Fr. Paddy is one on RHS.
See larger and full size. From Irish Jesuits.
See other copy. This is J/552/47.
See modern 360 view of this spot.

Close-up of 3 chaplains in 2nd row.
Fr. Paddy is one on RHS.
See back giving the names.

Grave of Fr. Paddy O'Mara, Jesuit plot of Glasnevin Cemetery.
See larger.
Still from 16:06 in video: "A real Jesuit plot".
He is in a list of "Sacerdotes" (priests).