Lord Deputy of Ireland 1565-71:
He was Lord Deputy of Ireland 1565-71 (under Elizabeth I).
He pioneered the first deliberate attempts at colonisation in the 1560s.
He established the boundaries of Co.Roscommon and Co.Clare 1565.
Carried out major rebuild of Dublin Castle 1565-78.
His wife Lady Mary was with him in Ireland. There was an incident when Drogheda, where Sir Henry had left his wife in his absence, was being threatened by the Ulster tribes. William Sarsfield, of Lucan Castle, Co.Dublin, came and relieved the town. Sir Henry knighted Sarsfield in 1566 "for having rescued Lady Sidney from the Irish".
In 1569 he crushed the first of the Desmond Rebellions by James FitzMaurice Fitzgerald and John Fitzedmund Fitzgerald.

Sir Henry re-built the Nave of Christ Church Cathedral, Dublin, after it had collapsed in 1562.
He restored Strongbow's tomb in Christ Church Cathedral, Dublin, in 1570. His name is on the plaque to Strongbow.
The rebellious Connor O'Brien, 3rd Earl of Thomond surrendered to him in Dublin in Dec 1570.
He entertained Elizabeth I at his property at Otford, Kent, in 1573.

Lord Deputy of Ireland 1575-78:
He was Lord Deputy of Ireland again in 1575-78.
His reports on Ireland are an important source.
Rory Og O'More of Leix was forced to submit to him at Kilkenny Cathedral 1575, and was later killed 1578.
He met his son Philip Sidney at Kilcullen, Co.Kildare, on 10 Aug 1576.
His arms were erected at Christ Church Cathedral, Dublin, in 1577.
He was implicated in the Massacre of Mullaghmast, a massacre of Irish gentry at Mullaghmast, Co.Kildare, in late 1577 or early 1578.
See The Image of Ireland (1581), an illustrated book about his campaign against Rory Og O'More.

Lady Mary Dudley. Sketch of above.
From NPG. See terms of use.

Arms of Sir Henry Sidney.
Over the gatehouse of Ludlow Castle, Shropshire.
Note motto "Quo Fata Vocant" ("Wherever the Fates Call (I Go)").
From here.

Sir Henry Sidney arms, Christ Church Cathedral, Dublin.
Sidney paid for re-building at the cathedral and his arms were erected in 1577 over the entrance to the N choir aisle.
The arms are now on the wall of the N Transept.
See p.12 of [Finlayson, 1878]. 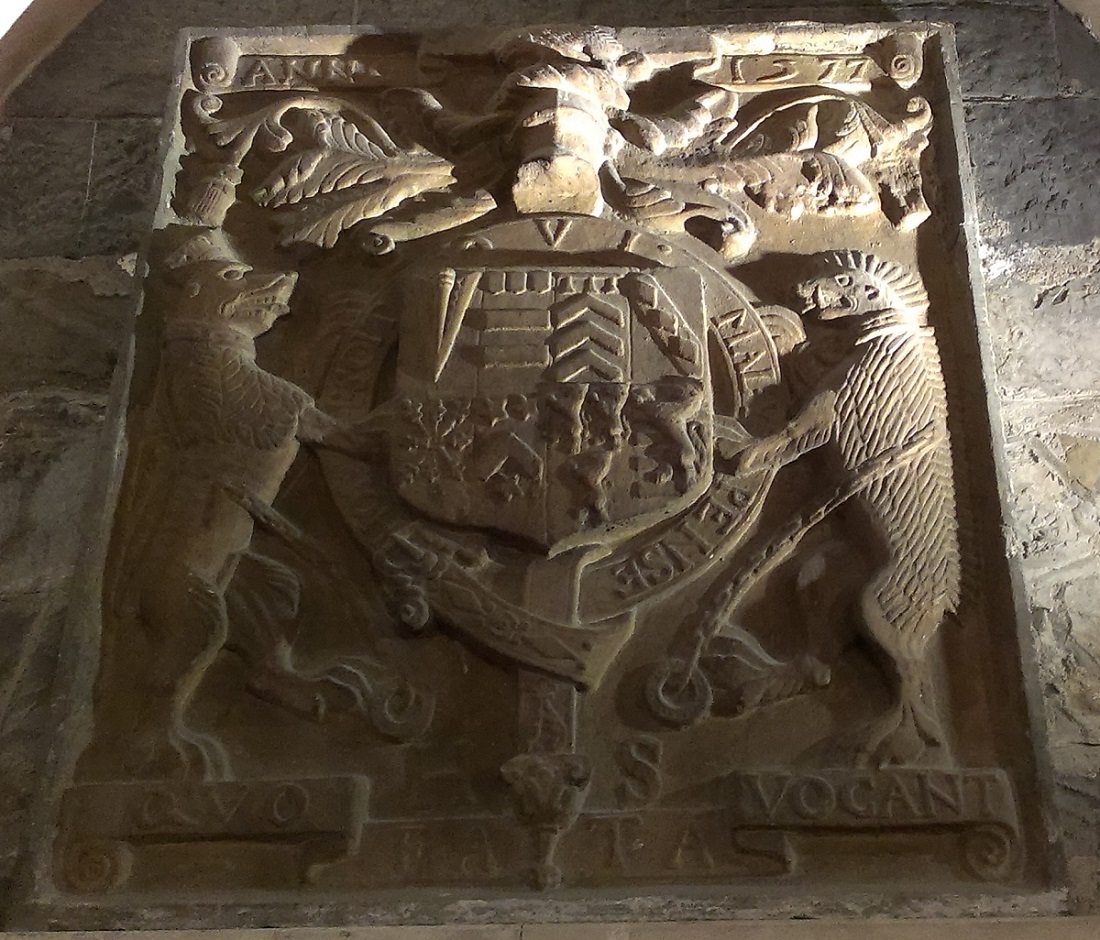 Sir Henry Sidney is also mentioned on the plaque at Strongbow's tomb in Christ Church Cathedral, Dublin.
The Strongbow plaque inscription says that the Strongbow tomb was destroyed in 1562 and the new Strongbow monument was erected by "The Right Honorable Sr Henry Sydney, Knyght of the Noble Order" in 1570.
Photo 2016. See wide shot.

Reference to a 1594 account implicating the Lord Deputy, Sir Henry Sidney, in the massacre.
Extract from the footnotes to the above.
These span from p.1694 to p.1698.

Detail of above.
See larger and full size.

Wider shot of above.
Photo 2007. See full size.
From jmc4 on Flickr. Used with permission.